The sound men dread the most? The snapping of a doctor’s latex gloves

How to be a Man: undergoing a prostate cancer test fills many men with fear – but it can be life-saver 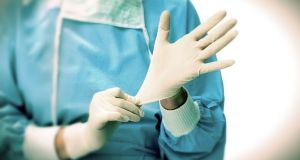 Visits to the doctor sometimes involves an inspection of a bodily orifice. Having an otoscope placed in your ears isn’t too bad; while for some of us having our throats examined with a tongue depressor induces a momentary gag reflex, most do not dread the invitation to “say aah”. But undergoing a rectal examination and (for women) having a vaginal examination represents an invasion of too great a magnitude for the procedure to be accompanied by a shrug of nonchalance.

As it is part of our How to be a Man series, and with a particular focus on men’s health special, this column will confine itself to the rigours of a digital rectal examination or DRE for short.

For men over the age of 50, the snapping of the doctors latex gloves, followed by an instruction to lie on your left side with your knees drawn up, is part and parcel of a check up. Mention urinary symptoms, however, and men will find themselves on the examination couch in double jig time.

The main target of the examination in men is the prostate, the walnut sized gland that sits at the base of the bladder and surrounds the urethra – the tube that runs from the bladder to the penis. A doctor is primarily looking for two things: a benign enlargement of the gland or evidence of prostate cancer.

About four out of every 10 men over the age of 50 and 75 per cent of men in their 70s have urinary symptoms that are caused by a benignly enlarged prostate. Meanwhile, more than 3,000 men are diagnosed with prostate cancer in Ireland every year. The chances of getting prostate cancer increase as you get older.

The best way to detect prostate cancer is a combination of a DRE and a blood test for prostate specific antigen (PSA). Finding a hard, craggy prostate on a DRE is not a good sign and of itself warrants referral for specialist investigations. A mildly elevated PSA, on the other hand, may be caused by a number of factors unrelated to cancer.

The issue of screening men for prostate cancer has proved controversial. Even the decision to monitor or treat an early stage cancer is up for debate. A recently published major study followed patients for 10 years and found no difference in death rates between men who were picked at random to have surgery or radiation, or to rely on “active monitoring” of the cancer. In addition, death rates from the cancer were low over all: only 1 per cent of patients were dead 10 years after diagnosis.

But the Oxford University study, published in the New England Journal of Medicine, revealed the disease was more likely to spread in the men who opted for monitoring rather than for early treatment. About half the 1,643 British men in the study who had started out being monitored ended up having surgery or radiation.

The research also shed light on the side effects of treatment: men who had prostate surgery were more likely to have urinary incontinence and impotence. Radiation caused some bowel problems after six months’ treatment; sexual performance dipped after radiotherapy but recovered to some degree with time. Significantly there were no differences between those who had surgery, radiotherapy or chose active monitoring when levels of anxiety or depression were monitored and quality of life measured.

Given the likely enhanced role of active monitoring for prostate cancer, DREs are unlikely to go out of fashion anytime soon. For men with a normal PSA level, a recent suggestion in a US journal to stop subjecting them to a DRE, as it rarely assists in diagnosing clinically significant prostate cancer, received short shrift. That feeling of DREad is set to continue for some.

How to be a Man is a series exploring masculinity and the challenges men face in Ireland today. If you would like to add your voice to this series, email howtobeaman@irishtimes.com