Alli Sebastian Wolf has devised the Glitoris, a 100:1 scale model of the real thing – it’s not just an artwork, it’s also an educational tool 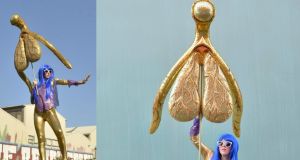 On Saturday night, Alli Sebastian Wolf delivered a sex-ed lesson in one of the world’s most famous performance venues. The Australian artist was pulled on to the stage of the Sydney Opera House’s Concert Hall at the request of the musician Amanda Palmer, who had seen Wolf’s recent piece “Glitoris” online.

It’s much as it sounds: a giant, sparkling clitoris, a 100:1 scale model of the real thing, covered in intricate, sequinned “nerves” so that it lights up the room “like a divine disco ball”, says Wolf.

Palmer said it was the most effective artwork in the fight against fascism she’d seen. Wolf will settle for a world with equality on toilet walls, where there are as many clitorises graffitied as penises.

She’s motivated by how little is known about the clitoris, even by those who have one themselves or interact with them regularly . “Sex-ed was, ‘These are the ovaries, this is a penis, don’t get herpes, off you go’,” says Wolf.

“It’s really interesting to me just how few people know about how the clitoris works, or what it looks like. I personally didn’t know until I was in my mid-20s, which seems like just such a shame.”

With Glitoris, she wanted to create “something fun and fabulous ... [and] really pleasurable to engage with – not a static artwork or an anatomy lesson, but something where people could come have a bit of a fondle and enjoy the sparkly colours”.

Hooked into the foyer of the Sydney Opera House, she said, it seemed to do the trick: “Everyone wanted to give it a bit of a hug.”

And now that the giant, golden clitoris has got your attention, here are 10 facts Wolf wants you to know.

Mostly invisible below the surface, wrapping around the vaginal tunnel and extending out towards the thighs. “The part that we’re seeing and feeling is just this tiny little glans that creates the head of the clitoris,” says Wolf. “From there, all this fabulous magical stuff is happening beneath the surface.”

There are more than 8,000 nerve endings in the tip of the clitoris alone

That’s double the number of those in a penis. A clitoris is made up of 18 distinct parts – a mixture of erectile tissue, muscle and nerves. “All those little pieces are working together to create the amazing sensations that anyone with a clitoris feels when they’re having orgasms.” The actual vaginal tunnel has almost no sensation at all – giving birth through something as sensitive as a clitoris would be “excruciating”, says Wolf.

They can swell as much as 300 per cent when engorged

Clitorises range from 7-12 cm in length and swell by 50 per cent to 300 per cent when engorged when aroused. It’s not “a zero to 100 situation”, says Wolf, but as you draw closer to orgasm, it increases in size.

When at rest, the “arms”, or corpora cavernosa, of the clitoris’ body extend straight out towards your thighs. When you’re aroused, they curl around “and give your internal body a little bit of a hug”.

G-spot and penetrative orgasms are clitoral

Both stimulate internal parts of the clitoris. “You can come from these different places that are all using the clitoris but using it in different ways,” says Wolf. Understanding has been frustrated by historical heteronormative studies of the female anatomy that assumed stimulation by a penis was necessary to orgasm; Wolf blames Freud.

It was only in 2009 that a small team of French researchers carried out the first sonographic mapping of an erect clitoris, even though the technology to do so had existed for years.

The first recorded use of the word “clit” was in America in the 1950s. “Clitoris” dates back to the 17th century and could derive from words for “sheath”, “key” or “latch”, or “to touch or tickle”, says Wolf.

It is the only known body part with the sole purpose of pleasure ...

But one in 10 women has never had an orgasm – and most, at some point, will have “a hard time” reaching orgasm with a partner, says Wolf. She blames a “culture of shame” surrounding female sexuality that suppresses scientific research and personal exploration.

... But it has not always been just a good time

Throughout history, doctors have advocated for the removal of the clitoris to cure mental illnesses such as depression and schizophrenia, or “this pesky problem of women ‘unnaturally’ desiring sex”, says Wolf.

In ancient Greece, lesbians or women who actively desired sex were often considered witches, “despite the fact that your husband could have 16 lovers, and be off at the bath houses with young men”. In medieval times, it was referred to as “the devil’s teat”, through which the devil could suck your soul. “The witch trials are a great example of the war against women, which hasn’t really stopped.”

The clitoris can form a penis – and vice versa

In some forms of gender confirmation surgery, the clitoris can be enlarged with hormones to form a penis. In other cases, the penile glans can be reduced in size and relocated to create a clitoris.

The first MRI scan in 2009 was carried out by Dr Odile Buisson and Dr Pierre Foldès partly to aid in understanding of how to treat female genital mutilation.

An 80-year-old clit looks and works the same as a 20-year-old one. But it does keep growing – it could be 2.5 times as big in your 90s as it was in your teen years. “They’re weird, fabulous little creatures,” says Wolf happily. (Your nose also continues to grow past the point you reach your maximum height.)

Every clit is unique

They come in different shapes and colours, from pale pink to black. “As varied as your face,” she says. “If you look at a picture of a swath of vaginas – I’ve never seen two that look similar.” – (Guardian Service)

If you are in Sydney, Glitoris will be on display at The Bearded Tit bar, Redfern, for a month from 24 January