Through plays, debates, games and quizzes, young Maliwans are learning about ending the stigma of HIV 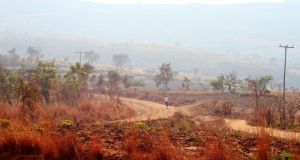 The Ntchisi region of Malawi. One in seven people in the Southern African country has HIV/Aids. Photograph: Sally Hayden

Jake* is 19. He found out he was HIV positive when an ad on the radio station he was listening to mentioned that the hospital he had been attending every month was a HIV/Aids hospital. “At first I was refusing to eat, stopped going to school, thought maybe I will die soon.”

Jake is one of a pretty unique sector of young people.

Those in his age group were the last to be born before medical advances reduced the chances of perinatally transmitted HIV from 25 per cent to less than 2 per cent, but still born late enough to benefit from antiretroviral drugs (ARVs), which hugely lengthen the expected lifespan of those infected.

Although Jake’s mother died from the virus she passed on to him during childbirth, he has survived. Along with all the other confusions that surround adolescence, he has had to come to terms with his diagnosis.

One-third of all those currently infected individuals are youth, aged between 15-24. Last Monday the World Health Organisation warned that governments were failing to provide adequate youth-specific services, something which has contributed to the 50 per cent increase in Aids-related deaths among 10-19 year olds between 2005 and 2012.

Training sessions
One group that has recognised this failing is the Baylor International Aids Initiative, which runs Teen Clubs in six African countries.

In Malawi, the staff at Baylor are rolling out their model nationwide, travelling the country holding training sessions and setting up self-contained clubs in local hospitals.

Malawi is also the first country where it has set up a Teen Support Line, a number the young people can call toll-free, to receive advice, ask questions or simply to talk.

On a Saturday morning in a hospital in central Lilongwe, Malawi, 35 10-14 year olds are happily chanting. Through a mixture of plays, debates, games and quizzes, they are learning about the issues surrounding HIV/Aids, stigma and what is happening in their bodies.

In a room with a more sedate atmosphere across the hall, 30 older teenagers discuss topics like how to overcome anger towards their parents and share advice on adhering to their medication regime.

At the first meeting of every Teen Club, the attendees together decide on rules to govern their meetings. Usually these will include a need to maintain complete anonymity – no taking pictures, no bringing guests and always being respectful towards each other.

Reluctance to talk
In Malawi, where one in seven people is infected with HIV or Aids, there is still a huge reluctance to talk about it, something that Malawi Teen Club co-ordinator Symon Mtambo recognises.

“Because of the stigma we realised that we were wasting efforts dealing with the community, so instead we focus on giving the teens the coping skills, make sure that they’re resilient.”

Club mentor
David Nyivenda (23), who now works as a mentor in the clubs, is someone on whom this has had an impact. He found out he was HIV positive when he was 14. Of his seven siblings, only one other has the virus.

He speaks movingly of the idea of “self-stigmatising”.

“You start asking questions about yourself. Why did it affect me? You think it was your own fault, forgetting that in the time you were born there were no interventions.”

He says the supportive community at Teen Club helped him move towards acceptance. “This is the way I am. If I hide it, it is still the way I am.”

Willing to speak
Three years after he started attending Teen Club, Nyivenda publicly disclosed his status by standing up in front of his church and announcing it to the congregation.

He told them that he wasn’t just speaking for himself, but for all the others present who were infected but unwilling to talk about it.

Since then he has spoken on Malawian television about ways to tackle stigma and will soon be travelling to conferences in Ethiopia and South Africa.

By building resilience in a group who have been infected since birth, the Teen Clubs might just be creating the first community of people who will be willing to talk openly about HIV/Aids.

As Joe Crimubura, a senior clinician at another local hospital, notes; “They’re totally pioneers. It’s like building the ship as it goes.”

One of the biggest issues for the young people is future relationships and how far into one you should consider disclosing your status.

With questions like these, Mtambo says that they can’t tell the teenagers what’s right or wrong.

“We don’t lecture. We always say we don’t have the answers to the challenges they are facing. We facilitate discussion and provide comprehensive information.”

Nyivenda has planned for the future. “I do think that I can marry when the time comes to marry.”

When the time is right
Jake tells me he’s going to have four children. “Two girls, two boys and of course there must be twins.”

He will disclose to a girlfriend when the time is right and hopes she will accept him for who he is. He won’t tell anyone else, though.

“I have not disclosed because I don’t trust my friends. Sometimes if you have a quarrel, they could throw it back at you or spread the rumour.”

Although he jokes about it, Jake’s attitude highlights the typical divide between the optimism of these young people when they’re together and the negativity they fear from their communities outside.

But, he reaffirms: “Living with HIV is not the end of the world. You can do anything that you want to do. Be a doctor. Have a good job. And take your drugs, because if you stop, you cannot live a healthy live. Just accept it.”

This article was supported by the Simon Cumbers Media Fund

World Aids Day is held on December 1st each year and is an opportunity for people worldwide to unite in the fight against HIV, show their support for people living with HIV and to commemorate people who have died.

*Not his real name