The marriage equality referendum was a start, but vulnerable youths need support 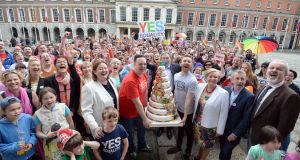 Yes vote anniversary: As images of jubilant adults cheering in Dublin Castle spread across the world, how did it feel for a young person sitting alone in their bedroom, still terrified of having to face coming out? Photograph: Eric Luke

With LGBT children and young people three times more likely to attempt suicide than their heterosexual peers, how equal do they feel in the year since the Yes campaign?

“In an [ideal] society I wouldn’t have to come out and explain myself,” says Jesse (17), who came out two years ago as Transfluid. “Equality is not about waving rainbow flags. It’s about people not caring in [what] respect we’re different.”

Last May saw a groundswell of support for equality when Ireland became the first country to have a popular vote for gay marriage. But as images of jubilant adults cheering in Dublin Castle spread across the world, how did it feel for a young person sitting alone in their bedroom, still terrified of having to face coming out?

“You don’t have to explain yourself if you’re straight, yet I do. If you think about it, the whole concept of ‘coming out’ is very strange. If everyone was just accepted for who they are, there would be no need,” says Jesse.

The average age of realising one’s sexuality is 12, while the average age of coming out is 16. These are children dealing with some of the hardest emotional, physical and mental challenges anyone can face.

With research showing that a LGBT young person is four times more likely to suffer depression and twice as likely to self-harm, it seems Ireland still has a way to go before that well campaigned-for equality trickles down to young people.

Before becoming executive director of Ireland’s LGBT youth charity BeLonG To, Moninne Griffith was director of the Marriage Equality campaign. “Our country said a big yes last year to allow same-sex couples to marry. But as a nation, we need to keep saying yes. The future has been secured for our LGBT young people but the present can still be a very scary and lonely place for them,” she says.

“There is obviously always going to be a certain pressure in coming to terms with being different and, as such, there will always be a need for support services,” says Griffith. “But that is a million miles away from where we are today, with research showing there is still a high level of homophobic bullying in schools.”

BeLonG To has seen a doubling of demand for its services since last year’s Yes campaign. Griffith sees this as hugely positive. “It means all those conversations during the campaign gave young people the space to figure out who they were and feel confident about coming out. But now we need to meet that need, ensuring we can provide the level of support, mental health services and anti-bullying programmes to respond.”

The LGBT Ireland Report published recently identified barriers to good mental health, including bullying at school, fear of rejection and discrimination, harassment and violence, and negative attitudes and stereotypes.

The report shows higher levels of self-harm and suicidal behaviour among LGBT teenagers as well as worrying levels of severe stress, anxiety and depression.

In spite of the Yes vote, the white noise of everyday homophobia still exists, much like everyday sexism. Because adults have built up resilience, and can make choices about where to live and who to socialise with, they can insulate themselves in a way that children can’t.

According to Griffith, “When young people are in school there is no escape when you are being bullied, and then they go home and it’s on Facebook. ”

In June, Children and Youth Affairs Minister Catherine Zappone announced that her department would be leading the development of the first dedicated national LGBT youth strategy this autumn, which makes tackling homophobia a priority.

It is hoped that the strategy will strengthen support structures in places where young people will need them. That means ensuring that teachers, social workers and medical staff have the training and capacity to help young people.

While canvassing for the Yes campaign, Jesse was pleasantly surprised how much positivity she encountered. “I’ve never met anyone who is really well informed and negative.”

Griffith sees the strategy as an exciting development. “It presents a real opportunity. We know of lots of schools doing amazing work and we know the difference it makes.

“Having a supportive teacher can transform a young person’s life. If they can go to school and be an ordinary student where they are accepted for who they are, we can dramatically change the landscape for young LGBT people.”