Superfoods: how super are they really?

‘If you are to eat some superfood constantly, you could end up with a very bad diet’ 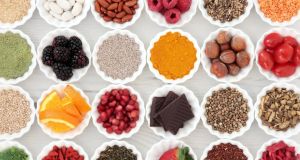 The term “superfood” is banned by the European Food Safety Authority.

Over the last few years, seemingly “normal” foods have gotten a higher profile. Blueberries, kale and salmon have all edged their way into our regular diets, with each of them labelled as a superfood.

The superfood craze means many of us now can pronounce quinoa (keen-wah) with ease and the regular potato is facing fierce competition from its sweet relation.

We search every few months for the newest, latest, greatest superfood that’s going to change our lives, and we’re now being told raw cacao powder, bee pollen and hemp are all to become staples if we’re to keep up with a healthy lifestyle. But are they all that super?

“Really it is a marketing term, feeding into that idea that there always needs to be something new,” says Louise Reynolds, dietitian with the Irish Nutrition and Dietetic Institute.

“The way it has been sold, it’s as if in order to have a healthy diet, you must have the latest superfood, but really, the science hasn’t changed that much to back all of this up.”

This is something Prof Mike Gibney, professor emeritus and former director of the UCD institute of food and health, echoes.

“When I started off in the field of nutrition, my mentor, Prof Jeffrey Taylor, said to me the most important rule you must remember about human nutrition is there’s no such thing as a good food or a bad food.

“There are good diets and bad diets. If you are to eat some superfood constantly, you could end up with a very bad diet. If you were to eat a bad food constantly, you could end up with a bad diet. A good diet is a diet that contains a balance of all those foods, which gives you the nutrients that are optimal for your health. No one food is going to do that. It’s all nonsense,” he says.

And yet, there are endless articles and blogs and celebrity endorsements of this, that or the other as the newest superfood you have to try. Part of the reason for the success of the label superfood as a marketing ploy, is that some people will always be looking for a magic bullet to solve their health or weight issues, according to Reynolds.

“They have this aura around them that means people may think that’s all they have to do, shop for superfoods . . . They are spoken about like they’re a fast route to perfect health, and they’re not that,” she says.

With many of the popular superfoods, their antioxidant properties are often hailed as their crowning glory, with antioxidants sometimes associated with reducing risk of inflammatory diseases like heart disease and cancer. However, Gibney says this is not backed up by science.

“In fact, in some instances, they caused more problems than they solved, the famous one being the use of antioxidants in the treatment of people with lung cancer in China. Those who got the antioxidants got worse,” he says.

While your yoghurts might loudly proclaim to be low fat on their labelling, you will never see your blueberries, goji berries, chia seeds or whatever you’re having yourself labelled as superfoods on the supermarket shelf.

The term is banned by the European Food Safety Authority (EFSA), and in order to label a food in that way, the industry would have to show human intervention studies to prove the food did as they claimed.

In fact, according to Gibney, even if you had studies to prove your case, “superfood” would still not be allowed – you would simply be allowed claim the food reduced this or helped with that.

“Superfood would never pass mustard with the EFSA. You would have to say my superfood reduces the risk of bladder cancer, in which case they would want to see your trials to show does it do it . . . The cranberry industry is doing studies, and I know that the walnut industry in California is doing studies.

While Gibney says eating more superfoods won’t hurt you in the long run, where you do run into problems is the culture it creates around these foods.

“If it means you’re eating more blueberries, it won’t do any harm, but where it does matter is if it sells the idea to people that there are simple solutions to dietary problems,” he says.

“Dietary problems require very considered responses, and the response that one person needs is not the response another person needs. If it sells the idea that you buy a blender, pop a whole load of superfoods in, press a button and drink it, and you’re nutritionally great, that is poppycock. That’s just not going to help,” he says.

“Eat a rainbow, which means to choose lots of different fruits and vegetables of different colours, and in that way you’ll get all the nutrients and antioxidants that you need,” she says.