The sex survey: the internet and casual sex, new ways to hook up

On Monday we publish the full results of our sex survey, which more than 12,000 of you participated in. As a taster of what's ahead, here’s what you told us about cybersex 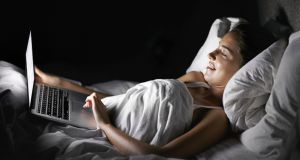 Dating in Ireland these days is about “hooking up” online; more often for men and bisexual women than for heterosexual women.

Nearly one in four men who participated in The Irish Times sex survey, which was conducted on irishtimes.com this month and received over 12,000 responses, are using dating apps to find casual sex, compared to just 8 per cent of women. The younger the man, the more he relies on cybersex: one in three in the 17-24 year old age group are using dating apps or websites to find casual sex.

Gay men are most likely to use apps or websites for casual sex, with 62 per cent saying they do so. And older men (16 per cent of 50-64 year olds) are more likely to use them than older women (3 per cent.)

“I think it’s great that 3 per cent of older women are using these sites for sexual hook-ups,” says Emily Power Smith, a sexologist. “That is definitely a sign that older people in general, and particularly women, are enjoying their sexuality in a more expressive way.” More sex/health education should be targeted at older people if they are to remain safe with casual sex, she adds.

The involvement of older people also struck Trish Murphy, a psychotherapist and The Irish Times agony aunt, as a sign of change. “Older people are unlikely to find casual sex in their normal routine and so going online provides a venue,” she says.

“People are using websites and apps much more now [and] I suspect the trend will increase,” comments Teresa Bergin, a psychosexual therapist. “In a way, there is nothing radically different from using an app to meet up with someone or have a one-night stand than encountering them in a pub or nightclub. Attraction occurs initially by seeing the person and develops (or not) later through getting to know them.”

It may not be the best approach to seeking a relationship, so you should be cautious, she adds, but the likelihood that people in “committed” relationships are using apps is probably the same as in real life too.

“This is an extension of fantasy that the internet allows, as long as it does not create an alternative intimacy to the primary relationship or to having no relationship at all,” says Murphy.

Lesbians (33 per cent) and bisexual women (47 per cent) are far more likely than heterosexual women to have had cybersex, while gay men are the most likely to have done it at 61 per cent .

But there’s still the old-fashioned one-night stand, whether it’s an app that makes the introduction or not. The majority of people who responded to our survey have had at least one. Three out of four men have had a one-night stand, compared with 68 per cent of females, with almost one in four women having had more than five one-night stands and 11 per cent more than 10.

“One-night stands seem to have replaced the older version of necking or heavy petting with someone. Most people seem to understand that it is what it is, and that no more is expected,” says Murphy.

The full results of The Irish Times sex survey will be published on Monday June 29th with coverage continuing in the Health + Family supplement on Tuesday.

The Irish Times sex survey was conducted on irishtimes.com over the course of a week in June 2015. A total of 12,639 participants completed the survey (a 71 per cent completion rate), with 12,134 responses used in the follow-up analysis. Over 500 responses were excluded, the vast majority because the participant was under the age of 17 (below the required age to take part) or where it was obvious that false information had been provided.