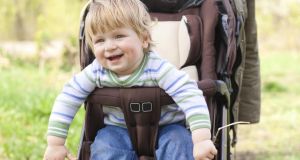 Children are strapped into buggies for the convenience of parents, often until they start school. Photograph: Getty Images

The HSE National Office for Suicide Prevention (NOSP) and 25 partner organisations have launched a new mental health campaign called “little things”. Although “little things can make a big difference to our mental health and wellbeing” the actions listed in the campaign materials are not little things. They are huge and would be profoundly challenging for the majority of people.

“Keeping active” is the first little thing suggested by the campaigners. Physical inactivity is one of Ireland’s worst health habits, causing obesity and chronic conditions such as diabetes. Fewer than one-third of adults meet the national physical activity guideline of 30 minutes of moderate activity five days a week.

Only 19 per cent of primary and 12 per cent of post-primary school children are doing the recommended 60 minutes of vigorous or moderate physical activity every day. Ireland received a D minus grade in the 2014 Report Card on Physical Activity in Children and Youth.

“Eating healthily” is another little thing, according to the campaign. Not so. Irish people are on course to be the fattest people in Europe because our diet is so unhealthy. “Drinking less alcohol” and “sleeping well” are good habits but not “little things”. Changing habits takes at least eight weeks and many people struggle with unhealthy habits all their lives.

Psychosocial factors, such as poor self-efficacy – belief in one’s ability to change – that are more likely to be present in those with mental health problems, affect our ability to engage in physical activity. The WHO wants physical activity to be presented as something to do because it feels good, not because it is healthy. Paradoxically, its connection to health has, over the years, discouraged activity.

The health word has become a negative, something to feel guilty about. It has become a verb, a “must do” thing, instead of a process and a way of being. It is now synonymous with lifestyle and has been hijacked by lifestyle advisers on TV programmes such as Operation Transformation on RTÉ and Doctor in the House on TV3. While these programmes are entertaining and may even change the health habits of participants in the short term, long term they will not improve anyone’s health, including that of viewers. The lifestyle approach portrays behaviour as simple, a little thing, and if we all just followed advice about physical activity and healthy eating, everything would be perfect. The lifestyle approach ignores the messy reality of most people’s lives.

Health is a process that begins during pregnancy and continues until death. The vast majority of Irish children are born healthy but things go wrong from the start. Babies should be exclusively breastfed until they are at least six months old yet only 47 per cent of babies born in Ireland are exclusively breastfed during the first few weeks of life.

By three months, 60 per cent are on formula milk. Children instinctively want to be active and run around because it feels good, yet parents and childminders rarely allow this. Instead children are strapped into buggies for the convenience of parents, often until they start school. Schools do not let them run around for safety and insurance reasons. Habits formed in the first few years last a lifetime and are very difficult to change.

NOSP is doing some great work. Its education and training programmes designed to reduce self-harm and suicide are excellent. The “little things” campaign is not one of its better ideas. Health is a complex phenomenon and helping people to be healthier deserves an equally complex approach. Implying that profound behaviour changes are easy may make people with mental health problems feel worse. We need to stop giving lifestyle advice and start focusing on health throughout the life-course.

Health is a process that needs to be facilitated by the State, through public policies, and by staff of local authorities, who need to ensure everyone has safe places to walk and play. It is time to get rid of the lifestyle police for once and for all.

drjackyjones@gmail.com Dr Jacky Jones is a former HSE regional manager of health promotion and a member of the Healthy Ireland council