The best things about Christmas are free. Don’t forget that 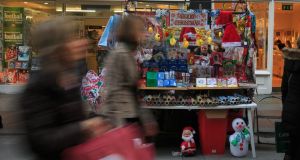 The best things about Christmas really are free: the carol singing, being around children, long walks, and meeting friends and family. Ignore all the hype. Photograph: Gareth Chaney Collins

December is a bitter month and not just weather-wise. Christmas festivities hardly ever live up to the way they are portrayed in television advertisements. Most families do not have blazing log fires, perfectly cooked dinners, happy faces around the table, well- behaved children and visitors exuding bonhomie.

Circumstances and personalities do not change because it’s the festive season. Cantankerous relatives behave as usual, or worse, given the intense pressure to be cheerful. Depressed and anxious people are still depressed and anxious. Loneliness persists even in a crowd. Old hurts, whether real or imagined, re-emerge at family gatherings, causing conflict, particularly when alcohol is involved.

Many people spend too much at Christmas and are in debt by the time the festivities are over. Shoppers are persuaded by aggressive marketing that they need the products on offer. Mental Health Ireland estimates that food is the biggest shopping bill at this time “because people get caught up in buying too much food”.

Industry group Retail Ireland has predicted that each household will spend an additional €600 this month. In fact, 2015 will be Ireland’s biggest spending spree since 2008. But the recession is not over for everyone. More than a quarter (29 per cent) of the population still experience two or more types of enforced deprivation compared to 11.8 per cent in 2007. Those on low-incomes splurge at Christmas to compensate for having few or no luxuries during the rest of year. Debt is bad for health and adds to Christmas stress.

A new report from the Picker Institute Europe, Debt and Health: A Briefing, shows the link between debt and ill health. A 2015 survey of 1,546 people in debt found that nearly three-quarters experienced insomnia and nearly half had visited their GP as a result of mental or physical health problems caused by debt. More than half of those surveyed “felt scared all or most of the time” and that they were “not worth much as a person”. Although participants in the survey were UK citizens, there is no reason to think that debt affects Irish people any differently.

Health professionals, particularly GPs, can make a big difference by spotting the problem, asking about debt, referring patients to debt advisors, and providing medical evidence to lenders if necessary.

Why do most people feel pressurised to spend more than they can afford at this time? The philosopher, Alain de Botton, provides some answers in his 2004 book, Status Anxiety. He says “status” is “one’s value and importance in the eyes of the world” and status anxiety is “a worry, so pernicious as to be capable of ruining extended stretches of our lives [and] a corroding awareness that we have been unable to convince the world of our value”.

Lovelessness (I am nobody); snobbery (other people are more important than me); expectation (I’m worth it); meritocracy (I’ve earned it); and dependence (others decide how important I am) are the root causes of status anxiety. People spend more than they can afford in the mistaken belief that material things will increase their value in the eyes of society. It will not.

Like envy, most people will not admit to feeling status anxiety but overspending at Christmas is a sure sign of its existence.

De Botton proposes five solutions: philosophy (do not be fooled by advertising); art (galleries and libraries are mostly free); politics (campaign for a fairer society); Christianity (the meaning of life); and a bohemian lifestyle (adopting a simple life). He is spot on. The best things about Christmas really are free: the carol singing, being around children, long walks, and meeting friends and family. Ignore all the hype. The advertising phrase “I’m worth it” must be the most specious ever invented. Be philosophical and do not expect family or friends to have personality transplants just because it’s Christmas.

Check www.mentalhealthireland.ie for tips on getting through Christmas without getting into debt. The Money Advice and Budgeting Service, MABS, has helpful information on debt management including A Guide to Surviving Christmas available from mabs.ie

drjackyjones@gmail.com Jacky Jones is a former HSE regional manager of health promotion and a member of the Healthy Ireland Council.