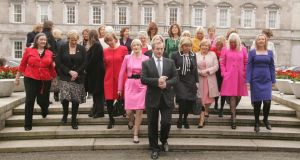 The Taoiseach, Enda Kenny, with TDs and Senators from all parties on the plinth at Leinster House after a breakfast to celebrate International Women’s Day. Photograph: Alan Betson

Equality for women is associated with better health for everyone. Despite this, equal participation of women in decision-making forums remains abysmally low.

The Department of the Environment, Community and Local Government recently set up a working group on citizen engagement. The group has six men and two women and is expected to report back to Mr Hogan in December.

The aim is to “make recommendations on more extensive and diverse input by citizens into the decision-making process”.

Imbalance
Incensed at the imbalance of male and female representation I wrote to Mr Hogan asking how the members had been chosen and, as it was a group on citizen engagement, 50 per cent of whom are women, why three-quarters of the members were men.

His press office responded saying: “The members were chosen for their experience and expertise in community engagement with the State’s machinery and are not on the group to represent any particular section of society.

“The group’s report will be reflective of the needs of all members of the community and its recommendations will be cognizant of the need to ensure the engagement of excluded groups and those whose voices are seldom heard with local government.”

The group is chaired by Fr Seán Healy from Social Justice Ireland and has representatives from Pobal, The Wheel, South Tipperary County Council, an environment group (unclear which one), and the Community Platform.

These may be very able people but how were they selected?

When choosing members for the group, if any thought went into gender balance at all, which seems doubtful, was it assumed that men are as able as women to bring female perspectives on citizen engagement, or that there are few women as expert as men in relation to “community engagement with the State’s machinery”?

There is overwhelming evidence that neither assumption is true. For a start, two-thirds of all volunteers in Ireland are women, who have to deal with public sector agencies such as the HSE and various government departments every day.

Almost two-thirds of carers are women who spend their lives dealing with the machinery of the State.

Dismissive
When I again protested about the gender imbalance, the press office replied: “Thanks for your comments, I have high hopes that they [the members] will feed into the consultative process.”

End of correspondence from a government department that purports to be interested in citizen engagement.

With such a dismissive attitude, how can Ireland ever hope to achieve gender equality? Ireland ranks 24th out of 27 EU member states in relation to numbers of female elected representatives. Only 15 per cent of TDs are women and 16 per cent of city and county counsellors are women.

Only 8 per cent of members of boards of top stock exchange companies in Ireland are women: half the EU average.

Last month the European Parliament voted to back the European Commission’s proposed law to improve the gender balance in Europe’s company boardrooms.

The EU target is 40 per cent by 2020. The European Union’s justice commissioner, Viviane Reding, said this vote “is a historic moment for gender equality in Europe”.

“The parliament has made the first cracks in the glass ceiling that continues to bar female talent from the top jobs.”

The programme for government 2011-2016 says: “Equality is at the heart of what it means to be a citizen in our democracy. We will take steps to ensure that all State boards have at least 40 per cent of each gender.”

Quota
Unfortunately, there is no further mention of this gender quota in the Government’s subsequent annual and progress reports. Are TDs, and in particular Government ministers, even aware of the 40 per cent target?

If they are, why does the working group on citizen engagement not have at least three women or, better still, four men and four women?

The Department of the Environment, Community and Local Government should know about gender quotas because it is overseeing the implementation of the Electoral (Amendment) (Political Funding) Bill 2011 which provides that political parties will face a cut of half their State funding if they do not have at least 30 per cent women candidates at the next general election. Equal societies are better for everyone.

Equal societies have healthier men, women and children, less obesity, less drug use, better mental health and healthier older people. What are we waiting for?