Running with a hangover: is it a good idea? 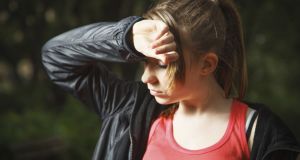 If the binge drinking really is a bad habit, do seek the appropriate help, because you can’t run off an alcohol problem, no matter how determined. Photograph: Thinkstock

Q I am a bit of a binger on all things. I can be quite healthy with my eating but then I’ll have a massive curry on a Friday night after six or more pints. Sometimes after work on a Friday night I drink too much, staying out until the early (or late) morning hours. But my routine is always to go running on a Saturday morning – even if I’ve had only a couple of hours’ sleep and am still feeling the intoxicating effects of alcohol. I drink a few glasses of water before I go and then often sleep the rest of my hangover off afterwards.

But recently a friend told me this was dangerous. Is it? I’m only 32 and this sounds over the top to me. Surely it’s better to binge and run than not to run at all?

A The obvious answer is that it’s better to run and not binge eat or drink at all. I’m not judging you though. I’ve certainly had my fair share of hungover runs. One particularly memorable one was in Dublin some years ago when I met up with the lovely Róisín Ingle to run in the Phoenix Park. It was a Sunday morning, after a celebratory night out which ended at about 4am. Róisín was most understanding – “take a woman away from her twin babies for the night, and she becomes a madwoman for 24 hours”, she murmured soothingly. Thankfully we went for a gentle walk and jog that my hungover body was able to cope with.

On a more strenuous note, 8,000 runners take on a marathon dressed in costume at the Medoc Marathon in France every year. They serve wine at the water stations because the course winds its way through some of the best vineyards in the world. Quite right too. The winners get to take home their weight in grand crus.

Back at home, most of us struggle to muster the motivation to haul our hungover bodies out of bed – even to get as far as the sink for a glass of water on a Saturday morning. That you are willing to head out of the door for a run is certainly to be applauded. You are a true grit fiend and I admire your pluck. This discipline is a strength that I’ve no doubt you can channel into anything you set your mind to.

At 32, yes, you are still young, but you are rapidly heading into that zone where running drunk is verging on the dangerously irresponsible rather than the forgivable actions of a feckless youth.

However, I fear you may be consuming more than three shots on one of your Friday night sessions that begin when you leave the office and end eight hours later, so I’m not convinced you should take much comfort from this study.

I’m sure you don’t need me to tell you that alcohol is, in fact, a poison when consumed in quantities above the recommended guidelines. As evidenced from rowdy street scenes in any city on a Friday or Saturday night, and as any Garda on the beat will attest to, heavy alcohol consumption can also increase aggression. This can, of course, be a positive when directed against your whiskey-addled soul, and channelled into getting you out of bed for that run.

But, joking aside, one of your main concerns should be around how alcohol adversely affects your co-ordination. If you are running on uneven terrain while still feeling the effect of alcohol, you are more likely to trip and break an ankle. Reaction times slow down too, meaning you don’t see that lamppost careering into your face before it’s too late.

Plus, alcohol acts as a powerful diuretic, depleting your water volume, much of which your body takes from your blood plasma. This means that your heart has to beat faster and harder in order to maintain the heart’s blood output. So when you find your heart is beating super fast after two minutes’ jogging, it’s not because you’ve been transported miraculously into “the zone” and have in fact been running for 30 minutes, it’s because your heart is straining to do its job. Recovery time is also significantly slower after alcohol.

Not a good idea

How about running home on a Friday night straight from work instead? Make it a binge run, by which I mean a long, fast, and furious one, before showering and changing for your night out?

You may find that the exhilaration and zen-like calm you derive from that hour’s running vastly more satisfying than the inebriation you get from eight hours’ drinking. And, with a body and mind naturally high on feel-good hormones, suddenly that binge holds much less appeal.

You may find you don’t want to drink at all as the run has provided the perfect tonic for a tough week at work. Or, that a few drinks is sufficient or fewer than usual will satisfy you. Give it a try this Friday, go on I dare you.

Here are some examples of a standard drink in Ireland. A pub measure of spirits (35.5ml) A small glass of wine (12.5% volume) A half pint of normal beer An alcopop (275ml bottle) A bottle of wine at 12.5% alcohol contains about seven standard drinks.