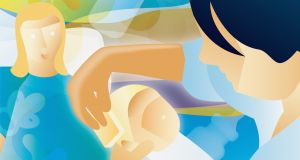 The implementation of the National Maternity Strategy may still be overdue, but initiatives to improve birth experiences for women are already under way across the country.

“A positive birth experience is about how a mother feels when she greets her baby, how safe and supported a mother feels giving birth,” explains Ali Murphy of the Midwives Association of Ireland. “It can mean a normal physiological birth in a hospital, or a gentle-caesarean, or a home birth.”

Midwives – “the purveyors of normal birth” – are “waiting in hope”, she says, for the strategy to be implemented as there is a huge disparity in care practices and choices across the country.

“Some hospitals are amazing at facilitating what women need but women need to ask for it,”she adds. “We need women to come in asking to have an upright birth, asking to be mobile. Positive birth experiences happen when a woman’s care provider trusts her to give birth and she trusts herself.”

“A lot of choices seem to be available in the big cities only at the moment, but we need to change that,” agrees Sheila Sugrue, the HSE’s national lead in midwifery. “However, the plan to implement the strategy has now gone into the Department, and once that is accepted we’ll have to step up a gear everywhere.”

The decision to appoint directors of midwifery at maternity units is already proving beneficial, says Sugrue. A directors’ forum now shares information and expertise – “they know what the bigger hospitals are doing so they are all sitting down to see what initiatives they can integrate”. The forum will also help directors rolling out community midwife services to mirror those at Dublin’s three maternity hospitals and Cork.

I’d like to see a situation where all women see a midwife two or three times after they return home.

“The early transfer home is probably the easiest midwifery-led model to bring in everywhere initially,” says Sugrue. “I’d like to see a situation where all women see a midwife two or three times after they return home. What has been happening is we’ve been sending women home after 36 hours and expecting them to be expert at breastfeeding. Women have felt very isolated.”

A disparity in conditions and facilities for women giving birth is slowly being addressed. Delivery rooms with birthing aids and showers are now standard at the Coombe in Dublin, which has a birthing pool for pain relief and water births; at Cork University Maternity Hospital, women have access to a birthing pool for pain relief, a home-from-home room, birthing balls, mats, and birthing stools to encourage active labour and birth.

Limerick is one hospital already embracing the spirit of the maternity strategy. Obstetricians, midwives, hospital management and service users have collaborated to introduce a range of initiatives, changes and new clinics, in preparation for its implementation.

“We already support women using birthing balls, being mobile in labour, having their partners with them, bringing a doula, and women-centered caesareans which gives a menu of different interventions that women can choose from,” says Quigley.

Fear is the biggest antagonist to a positive birth experience

All the midwives stress that antenatal education is a key contributor to positive birth experiences, regardless of how women give birth. However, many mothers do not avail of free educational options, observes Murphy, who teaches hypno-birthing, an initiative now being offered by units including the Rotunda, Coombe and University Maternity Hospital Limerick. “I sell it as being mentally and emotionally prepared for birth. Fear is the biggest antagonist to a positive birth experience.”

“It’s empowering the ladies to believe in their bodies, and to believe themselves that they can get through the pain,” adds Quigley. “They are taught massage and touch and breathing exercises all with the support of their partners, and it puts them in a more relaxed place, so they can control the pain themselves rather than letting the pain control them.”

Examples of other antenatal initiatives include a VBAC (vaginal birth after cesarean) clinic in Limerick and a “next birth after caesarean” clinic at the Rotunda. Cork University Maternity Hospital has developed an online booklet as part of their antenatal programme, while the community midwife team at Dublin’s National Maternity Hospital has online leaflets for pregnancy and labour and birth, which are used and recommended by midwives across the country.

It was these leaflets, together with the introduction of mobile monitoring for women in labour, which earned the National Maternity Hospital team first prize for innovation in practice at this year’s British Journal of Midwifery Practice Awards. Another element of the award-winning initiative was “Labour Hopscotch”, a visual birthing tool designed by midwife Sinead Thompson, which suggests divisions of 20-minute “steps” during labour, such as keeping mobile by walking sideways on a stairs, or sitting on a stool while being massaged. Its impact on epidural rates and positive birth experiences is currently being evaluated in conjunction with UCD’s School of Midwifery. “That award was about going ‘back to basics’. We have gone overboard with the technology,” notes Sugrue.

Another initiative at the Limerick maternity hospital is to meet individual pregnant women unhappy with previous birth experiences to discuss their fears and birth preferences. The Coombe in Dublin, meanwhile, has introduced an advocacy officer for women with issues about consent or their proposed care. And for women who experience a birth that is not positive, or even difficult, that hospital now has a designated birth reflection midwife to listen to concerns. Talking to someone after a birth is a key element in improving birth experiences for women, explains Sugrue. “Not everybody is going to have a positive experience so debriefing is very important.”

A Midwives Association of Ireland conference on September 29th – Midwives Supporting Midwives, Supporting Women – will feature Milli Hill of the Positive Birth Movement as its keynote speaker. “It’s all about promoting positive birth and showing midwives how we can be there to support women,” says Murphy.

Community midwives labour and birth information: download a pdf full of adive and tips for a positive birthing experience.

Information on Preparing for Birth & Parenthood, a handbook for parents-to-be attending the Preparation for Birth and Parenthood Education programme at Cork University Maternity Hospital isavailable here