The majority don’t have enough time to eat and, for some, it’s an unhappy part of the day 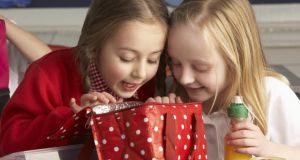 Food fact: the least healthy element of the ‘healthy eating’ lunchbox is the most likely to be eaten. Photograph: Thinkstock Images

‘Why didn’t you eat your lunch?” asks a parent.

“I didn’t have enough time,” replies the child.

Hands up all parents of primary-school children who have that conversation on a near-daily basis as the once-fresh contents of lunch boxes are dumped in the bin, yet again.

You might be sceptical about your child’s excuse, particularly if the least healthy element of the “healthy eating” lunchbox is sure to have gone, if nothing else. But the chances are it’s true, because it’s not just your child. Just over half of children at primary school – 52 per cent – say they don’t have enough time to eat their lunch, according to a new survey by the National Parents’ Council – Primary (NPC).

“This is a figure we would be concerned about,” says NPC chief executive Áine Lynch. Research shows a worrying number of children go to school without breakfast but, even if they are having breakfast, many are clearly not eating properly again until they get home. For children with after-school activities, that might be 4pm, or later.

Lack of food is not conducive to learning and the time pressure to eat also creates a stress for children, she argues. There can be an impact on energy levels, behaviour and ability to concentrate.

“You know that some children, when they are hungry and haven’t eaten, will become cranky and this will affect their behaviour, and all this is coming back into the classroom in the afternoon.”

As a member of the Hunger Prevention in Schools Strategy Group, established by the Educational Disadvantage Centre, Lynch works on how best to support children who are coming in hungry and without proper lunches.

This survey is the first the NPC has done with children. Through an email to parents, children were invited to complete a short, online questionnaire, which attracted almost 3,500 responses. Lunchtime was chosen as the inaugural topic because, from the council’s dealings with schools, it appeared to be an issue that pupils had strong opinions about.

Practices vary from school to school but many would have a 10- or 15-minute mid-morning break and a 30-minute lunchbreak – the focus of this survey – of which, typically, no more than 10 minutes is given for eating, followed by 20 minutes in the playground.

“That is what you would want it to be, but you don’t know until you ask,” says Lynch. But it is concerning that for 7 per cent (234 children in this survey), it isn’t a happy time, she continues. “This does need to be looked into more.”

Reasons given by those who say they are unhappy include not having enough time to play with friends, bullying and not being allowed to run.

While it’s still too soon to gauge the effects of the Department of Education’s 2013 Action Plan on Bullying – schools were allowed until last Easter to draw up an antibullying policy – it is an issue that is looked at more closely now in whole-school evaluations.

“Bullying in schools frequently takes place in the playground/schoolyard,” according to the department’s anti-bullying procedures for schools. Playground games present opportunities for bullying because of their physical nature.

“It is relatively easy to single out and bully another pupil. The noise level masks much of what is going on,” it points out. There is also a chance, in the playground, for older pupils to pick on younger pupils and it can be the setting for bullying by groups.

Since January 2014, the department’s inspectorate has added questions to the parent and pupil questionnaires in school evaluations, to get a clearer picture of how schools are dealing with bullying.

“Drawing on the responses to the additional questionnaire items, the inspectorate is conducting an analysis of parent and pupil perceptions of the school’s actions to create a positive school culture and to tackle bullying,” a department spokeswoman says.

A report of the findings will be available in due course.

Department of Education and Skills

“Schools make a decision like this based on their own circumstances but do not implement a ‘no running’ policy without good reason,” says INTO general secretary Sheila Nunan. They may have to ban it because of a lack of space or because of a dangerous surface in the yard.

The former can be caused by overcrowding or putting prefabs in playgrounds while the latter, she argues, is down to a failure by the department to fund essential repairs and maintenance of schools.

“Teachers have to use their professional judgment and take action where there is a foreseeable risk to children’s health and safety,” she says, stressing there is no evidence that such decisions are driven by fear of litigation.

And where “no running” does apply, it is not a case of children in a playground having nothing to do, Nunan adds. “Schools in these situations often compensate with games like hopscotch or skipping. Others have installed climbing frames.”

The use of equipment in the playground, such as skipping ropes and footballs, emerges as an issue in the NPC’s survey. Nearly half – 42 per cent – of the children do not think toys are shared fairly at lunchtime.

The reasons range from “not allowed any” and “whoever gets out first gets the best stuff” to “only the big children get to use them” and “pushy girls take them”.

From reading more than 1,000 elaborated responses (in addition to tick boxes), Lynch says she got the sense that the structure of playtime needs to be considered a little better. There need to be options for all children in the school – not just the ones who like to skip or play football. Some of the older girls complained there was nowhere to sit to have a conversation.

Each school is different but the only way the issues highlighted in this survey can be addressed is in very open discussions with children, suggests Lynch. “Children often have the solutions: they are living this every day.”

While the NPC is not presenting its survey as scientific research, it does believe it gives a flavour of what children have to say. Lynch hopes the findings will provoke schools to consult their own pupils.

“If a principal or teacher in a school,” she adds, “reads about this and says ‘this is what the kids in our school may be thinking. We should ask them’, then it will have been a success.” For more details see npc.ie swayman@irishtimes.com