Travelling while pregnant – the dos, the don’ts and the dangers

If you’re thinking of flying while pregnant, make sure you know the risks and problems that may occur, and your airline’s policy 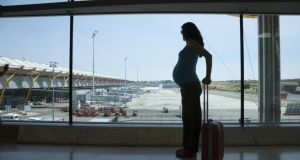 Women who are travelling to the US at a later stage in pregnancy should check their travel insurance policy as they may not be covered for medical treatment if they go into pre-term labour while in the States. Photograph: iStockphoto

So you’ve decided to take the bump on a babymoon but are unsure as to the risks of travelling while expecting. Making any trip as safe and comfortable as possible is always a priority, but when baby is on board it is wise to be fully informed of potential hazards and no-go areas, as well as practical travelling information.

The word on everyone’s lips is Zika, the mosquito-borne virus which has been linked to severe birth defects. Having just been added to the list of notifiable infectious diseases that must be reported to Irish authorities, women who are pregnant or planning a baby are re-considering their travel plans to Brazil and other countries in South America where there is currently an outbreak of the virus.

Dr Jennifer Donnelly, consultant obstetrician and gynaecologist at the Rotunda hospital and a member of the Institute of Obstetricians and Gynaecologists, says there is still a certain amount of uncertainty around Zika virus. Although Zika virus has been around for a very long time, it is only recently there has been an outbreak and that a potential link has been identified between the disease and foetal abnormalities such as microcephaly, she explains.

“The exact rate of this is actually unknown, as with all travel-related diseases during pregnancy, so the general advice from Ireland, as well as the UK and US, is to avoid travel to these areas if pregnant or planning to get pregnant. We don’t exactly know how high the risk is but it’s there.”

She says there is potential for sexual transmission of the Zika virus. “It has also been reported in semen so if someone’s partner has been to the region in the last eight weeks, the couple should use condoms.”

Pregnant women who travel to any country should take the normal precautions against mosquito bites, such as wearing long trousers, and using mosquito nets. She says that, contrary to popular opinion, DEET-based insect repellents are safe for use during pregnancy.

Toxoplasmosis is a disease caused by a common parasite that can infect all mammals – many of us will have been exposed to it at some point. Often contracted from undercooked meat, or contact with cat/dog faeces, it is in pregnancy, however, that it becomes dangerous.

France has a much higher rate of toxoplasmosis during pregnancy compared with other countries – more than two-fold. Unsurprisingly, it is taken very seriously in the country, says Donnelly.

“In France they will test for toxoplasmosis during every trimester, as part of a national programme. Women there would usually already know their status, having been tested previously . . . they even get tested before they get married.

“There isn’t very good treatment for it during pregnancy, but if you knew you had been exposed previously, then your likelihood of exposure again is low. If someone is trying to get pregnant and travelling to France, it would be helpful to know if they are immune or not.”

The general advice would be to avoid some of the local delicacies and not eat undercooked meat or soft cheeses while on holidays anywhere, she says. “And of course to drink only bottled water, but that would be sensible advice for any traveller.”

Remember that some medicines for treating stomach upsets and traveller’s diarrhoea aren’t suitable during pregnancy.

Many vaccines are safe in pregnancy, says Donnelly but it depends again on the specific area to which the woman is travelling. Vaccines for polio, Hep A and B, rabies and typhoid have all been documented as being safe to have while pregnant.

Some are contraindicated in pregnancy, however, such as the MMR and chicken pox vaccine.

“The live flu vaccine is contraindicated but not the seasonal flu vaccine that everyone is recommended to get if pregnant.”

It is also now recommended that women in their third trimester get the pertussis (whooping cough) vaccine, advises Donnelly.

Is any country off limits? Donnelly says no, but recommends getting advice from a travel specialist before making plans, as they will have up-to-date information on particular outbreaks or illnesses in a given area.

It’s a common misperception that women in their third trimester cannot fly. In fact, they can, with revised guidelines recently published by the Royal College of Obstetricians and Gynaecologists in the UK suggesting the safest time for women to fly is before 37 weeks and 32 weeks for women carrying multiple births.

“Obviously a lot of people travel the whole time when pregnant and if they have had a straightforward pregnancy until then and are travelling for only a short time, there are no inherent risks from travelling.”

There are no risks from airline security screening for mother and baby, nor from flying at high altitudes; the amounts of radiation that pregnant women might encounter in these scenarios are minute and will have no negative effects.

One practical concern could be travelling to the US at a later stage in pregnancy; Donnelly advises women who do this to check their travel insurance policy as they may not be covered for medical treatment if they go into pre-term labour while in the US.

Another factor to keep in mind is just how “bumpalicious” you are; even if a woman is well below the threshold but happens to have quite a large bump, airline staff may express concerns about her boarding a flight and may even forbid it, she adds.

The main thing is to think long and hard about travel plans if the pregnancy has not been smooth sailing so far.

Ryanair: Expectant mothers are free to fly up to 28 weeks of pregnancy. Once an uncomplicated pregnancy reaches its 28th week, Michael O’Leary’s airline requires expectant mothers to carry a “fit to fly” letter (downloadable on ryanair.com), completed by their midwife or doctor.

Incidentally, babies must be at least eight days old before Ryanair will allow them on board, in case you’d planned on jetting off with Junior.

Aer Lingus: With Aer Lingus it depends how far flung you wish to fly.

For flights between Ireland and the UK, pregnant women can travel up to week 32 with written permission from a doctor. To travel between weeks 32-35, the woman must bring an Expectant Mother Travel Advice form (downloadable from aerlingus.com), completed by their medical professional. Travel is not permitted after week 36 on this route.

For all other Aer Lingus routes, women can travel up to week 28 of the pregnancy with written permission from a doctor/midwife. Women who are 28-33 weeks’ pregnant must complete and bring an Expectant Mother Travel Advice form, while those over 34 weeks pregnant are not permitted to travel.