Pregnancy can make or break the generational cycle of drug addiction 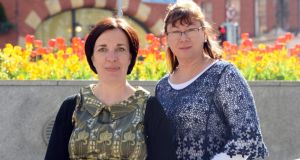 Pregnancy can make or break the generational cycle of drug addiction: pessimists would say the odds are the baby will grow up to follow in the parent’s footsteps while optimists see it as a great motivator for addressing substance abuse.

“The role of motherhood is phenomenal in the decisions and the treatment pathway for an expectant mother or for a mother,” says Pauline McKeown, the chief executive of Coolmine Therapeutic Community. But the right support needs to be available at the right time.

If, for example, one of the drug liaison midwives working with Dublin’s maternity hospitals has a client ready to go into Coolmine’s Ashleigh House but there isn’t a bed available, a chance can be lost.

As we speak, there are 13 women on the waiting list for Ashleigh House, six of whom are pregnant; four of those are drug free, showing that they have gone to great efforts already to beat their addiction for the sake of their babies.

Last year Ashleigh House worked with 67 women in the primary treatment programme that is delivered over a five- to six-month inpatient stay, and 40 of those were mothers.

From the end of May its capacity will be increased from 20 to 25 beds, with the support of the Department of Health and the HSE.

While normally the programme is for people who are drug free or reducing their methadone, for women in the later stages of pregnancy it would not be recommended that they reduce or detox.

Coolmine opened as a residential drug treatment and rehabilitation centre in 1973 and, just over a decade ago, started to look closer at the barriers to women addicts seeking help.

These related largely to “the guilt and the shame attached to being a parent who uses substances”, says McKeown.

In 2008 it established an on-site creche with funding from the Department of Health. This enabled pregnant women, and women with preschool children, to come in for the treatment programme without the risk of their children being taken into care, or having to voluntarily place their children into care of family or into foster care, she explains.

Despite this practical assistance, staff at the centre still felt there was something missing. Low self-worth was hampering the “emotional availability” of these mothers to bond with their children, says McKeown.

As it happened, there was a children and family social worker from Australia on placement in Ashleigh House who had worked with Prof Sharon Dawe and she told them about the Parenting Under Pressure (PUP) programme. Coolmine contacted Dawe, who came over on her next UK trip and started training staff for a pilot project in 2014.

The 10-week programme, involving one-to-one sessions as well as group work, allows participants to air their self-doubts about being capable parents, helps them to understand what they’re good at and to learn parenting skills.

After being introduced in Ashleigh House, PUP is also now used in Coolmine’s 32-bed male residential centre and will soon be offered in the city-centre day services too.

While men are less likely to talk about low self-esteem or the impact addiction has had on their children or their families, it is there nevertheless, says McKeown.

“While we are very much there to support the family units we are working with,” she adds, “we do strongly believe that this could potentially have the capacity to decrease the level of generational cycles of addiction.”