Neighbourhood groups for parents of teens, why so few? 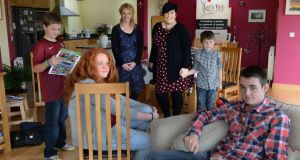 Clare Perry, left, and Layla Moroney with their families, Hannah and Eliot Perry (in red tops) with Kai and Christian Moroney (in check shirts): ‘There is a lot of help out there for parents running into problems, says Perry, if only they knew about them.’ Photograph: Cyril Byrne 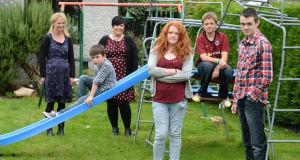 ‘Providing a space for parents and carers of tweens to teens” is the tag line for a community-based support group, Let’s Talk, in south Co Dublin.

In an era when parenting chat and advice is prolific on the internet, it is refreshing to see parents gathering in real life to share a sense of solidarity in the later years of childrearing. While there is no shortage of baby and toddler groups, and the school gates of primary schools provide a focus point after that, a neighbourhood group for parents of teenagers is rare.

It was the idea of Clare Perry, a mother of two children aged 15 and 11, who worked as a psychologist before being made redundant 11 years ago, and Layla Moroney, a mother of two boys, aged 15 and eight. They met while doing an addiction studies course run by Swan, the Southside Women’s Action Network

“There is nothing for parents of teenagers; our kids had just gone to secondary,” says Perry. “There is that gap.”

“When your kids go to secondary school, the school gates are closed to you,” agrees Moroney. Yet it can be a time of complex parenting issues, when sharing with other people going through something similar is never more important.

Along with Rachel O’Sullivan, who has now stepped back to pursue further studies, the two women established the group last January. It meets fortnightly in the clubhouse of Shankill Football Club in Shanganagh Park, with a focus on both information and informal support.

A guest speaker comes along each time to address a particular topic, while parents also get the chance to chat over coffee. Subjects on the programme between now and Christmas include coping with separation (October 14th), a parent mentor on a different kind of discipline (November 5th) and a speaker from the Monetary Advice and Budgetary Service (November 19th).

There is a lot of help out there for parents running into problems, says Perry, if only they knew about them.

A chance to chat

“Today was very everyday,” she points out at the end of a meeting one recent Wednesday morning, when the guest speaker was family mediator Glynis Good, author of When Parents Split. With a lot of insight and self-deprecating humour, she addressed the question of “How to talk so they listen, and listen while they talk.”

She was struck by how deep-thinking her teenage clients were, yet conversations with her own teenagers tended to be limited to mundane nagging about picking up clothes and not leaving dirty dishes around. “Step out of the busy-busyness of being a parent and remember what we are there for,” she suggested to the group.

Linda Lawlor, mother of two adult children in their 20s, and another two boys aged 11 and eight, has been attending Let’s Talk since it started. She wishes there had been a resource like that when she was trying to cope with her son’s heroin addiction.

“When I was struggling with my son, I didn’t know where to go,” says Lawlor.

If she had had more information and support when she had the first inklings that all was not well, she says: “He may have well ended up on that path anyway but it definitely would have helped.”

Lawlor has since shared her experiences as a mother of a recovering addict in a talk to the group – “How it affected me and my family and how we got through it” – in which she urged them to listen to their gut instincts as parents. And her son is doing “brilliantly” now.

She reflects on how she is definitely having a different parenting experience second time around with her two younger children, not only on the back of raising the other two but also going to parenting talks.

The informal, relaxed atmosphere of Let’s Talk is lovely, adds Lawlor, who believes that you can’t beat meeting people face to face who share similar concerns when it comes to their children.

Meanwhile, they’re busy organising a drop-in, free seminar in the County Hall in Dún Laoghaire, Co Dublin, next Tuesday, as part of Social Inclusion Week for which the theme is “Sharing the Caring”.

From 10.30am to 7pm, local and national organisations will host stands to outline the services they provide, relating to a broad range of topics, including bullying/cyberbullying, drugs/alcohol, mental health, teenage behaviour, sport and body image.

Highlights of the day will include a talk at 5.30pm by the wise and always entertaining John Lonergan, former governor of Mountjoy Prison and author of Parenting – Raising Your Child in Ireland Today, and an expert panel discussing parents’ questions at 12.30pm.

For more information about Let’s Talk and/or the “Sharing is Caring” seminar, email letstalk.shankill@gmail.com, call 086-1544348 or see its Facebook page.