It’s not a war of the mammies, it’s simple childcare choices...

‘You can either stay in the home and not own it, or go out to work and never be in the home you own’ 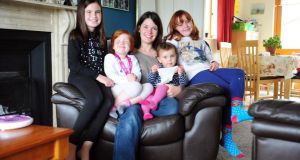 Maria Moulton and her daughters Lily, Maggie, Alice and Anna, at their home in Athlone, Co Westmeath. ‘The bulk of my friends would be working mothers. None of us is fighting about who has got it harder,’ says Maria. Photograph: James Flynn/APX

“You can either stay in the home and not own it, or go out to work and never be in the home you own.”

Maria Moulton, a mother of four girls ranging in age from eight years to 20 months, neatly sums up the stark choice many parents face in struggling to cope with the competing demands of raising children and keeping a roof over their heads.

With one income, children and bank rules, “you just don’t qualify for a mortgage”, she says.

“Our rent would be a mortgage on a really decent house, but that’s a house we would never be allowed to get a mortgage for because I’m at home.”

However she’s sick of the so-called “mammy wars” myth; the pitting of stay-at-home mothers against those working outside the home is something she believes exists only on social media and in the opinion pages of newspapers.

“The bulk of my friends would be working mothers and we would all be making hugely different choices from each other. None of us is fighting about who has got it harder or who needs more help.”

But, in the run-up to Budget 2017, news of the Government’s plan for wider subsidising of centre-based childcare inevitably met the “what about . . . ?” argument. It’s a response that seems to have paralysed past governments – resulting in parents facing some of the highest childcare costs in the world.

Earlier this year, the European Commission called on Ireland to “improve the provision of quality, affordable full-time childcare” and the Department of Children and Youth Affairs is working towards this, a department spokeswoman says.

However, commitments in the Programme for Partnership Government in relation to home carers’ tax credit (to increase it from the current maximum of €1,000) and extended paid parental leave (within the first year) will be considered as part of the Government deliberations on the planned Early Years Strategy, she adds.

Moulton, who lives in Athlone, Co Westmeath, with her husband Jimmy, a software engineer, would not begrudge families childcare subsidies. She has friends who are paying up to €2,000 a month in childcare fees and knows others have had to leave jobs because they can no longer afford childcare. But there are also people who would love to stay at home to care for their children and can’t because they can’t afford the mortgage, she points out.

She would like more State support for people who make different choices; at the moment it is about “trying to fix a broken system”, she says. “We live in an economy and not a society. As long as all our focus is on helping the economy and not the family, we’re not going to get anywhere.”

The subsidy plan proposed by the Minister for Children and Youth Affairs, Katherine Zappone, is what the National Women’s Council of Ireland has been advocating, says its director, Orla O’Connor, but it won’t go far enough if there is an income threshold.

“There needs to be this universal model that supports all parents but supports parents on lower incomes to a greater extent,” she says.

She doesn’t believe it would be better to give all families untargeted payments to use as they see fit. By paying providers directly, the subsidies are tied in to trying to ensure high-quality childcare – which is of utmost concern to parents using it.

In a debate such as this, does the council get accusations of not representing all women? “We do from the groups that don’t support subsidised childcare,” says O’Connor. “We don’t buy into this women in the home versus women outside the home because this is not how women’s lives are anymore.”

Women want to spend more time with their children at different times in their lives and they need to be supported to do that. The council has been campaigning not only for extending parental leave and more flexible working but also that work in the home be credited for the full range of PRSI benefits, including pension and maternity benefits.

However, part of the problem, she says, is that “we are extremely subjective. I think it is quite difficult to talk about these things”.

The reality is that mothers and fathers make all sorts of decisions on what’s best for their children based on many factors, ranging from personal preferences and past experiences to their circumstances at any given time.

Yet emotions can run high when debating options. Those who argue that centre-based childcare is not what every parent wants for their child seem more likely to have their motives questioned than their points debated.

According to the “preference theory” devised by UK social scientist Catherine Hakim on the basis of research in western countries, 21st-century women fall into three distinct groups: the home-focused, the work-centred and a much larger group in between “who want the best of both worlds”, she tells The Irish Times. In any given country, the distribution of women between the three groups depends very much on government policy, she says.

She points to the popularity of the homecare allowances paid to families in Finland, where the youngest child is under three, instead of taking a place in subsidised daycare. That sort of policy, she believes, gives “a much fairer, even playing field” between women who go out to work and those who stay at home.

“It’s public recognition of what they are doing is a job,” says Hakim who, as a self-described “careerist woman” without children, sounds slightly amused that she has ended up championing the rights of full-time mothers.

“You have to understand as a social scientist that not everybody has the same attitudes and values as yourself. It is completely blinkered of feminist academics to insist that all women are the same as themselves and want to do nothing but work all day and not spend any time with their children other than at weekends and holidays.”

Due to the current lack of options for parents in Ireland, Moulton believes “we are so busy trying to defend our own position, we are not able to look at the big picture and make any progress”.

Like Moulton, Christine McDonnell has four children, aged from nine years to one-and-a-half, but she has never considered not working outside the home. An architect in south Dublin, she acknowledges she is lucky to be working in the public sector and living close not only to her children’s school but also to her workplace, which has a creche attached.

She works full-time but is using unpaid parental leave to take two afternoons a week off “to give that bit of breathing space”. She only began to do that when her third child started in junior infants – “it made more financial sense, by the time you had three of them in after-school care”.

Her youngest is in creche full-time, while the other three go into after-school care once a week, are looked after by grandparents for two afternoons and then McDonnell is at home herself the other two afternoons.

On the occasional bad day she wonders what she is doing this for but equally, she points out, if you were at home all day you would be thinking the same when the going is tough.

Her husband works full-time in IT and doesn’t really have any flexible options in his current job.

“By default it has always landed on me when stuff happens or things go wrong.”

McDonnell would welcome a Government move to reduce childcare costs. “I really think there should be some sort of subsidy on childcare – it is an absolute killer,” she says with feeling.

The ECCE scheme, which is sometimes referred to as a “free year of childcare”, is far from that, she says. The three hours a day “reduces your fees by €260 a month but you are still paying €700 a month.

“For a couple of years I was working for very little – I had three of them in creche at one stage.” If she didn’t love her work, her decisions might have been different.

She dismisses the idea that there is any friction between mothers in employment and those who have chosen to stay at home.

“I suppose sometimes when you see the stay-at-home mums heading off for coffee in the morning and I’m on my way to work, or they are in their running gear about to head off, you feel kind of wistful.”

But in reality she knows that every choice has a price.

Our neighbour says he has permission to build on our boundary wall. Can he?
10