Ignore the scaremongering: the risks of being overweight are overplayed 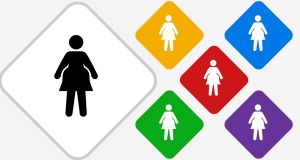 Pregnant women who “allow” themselves to become overweight are “criminal”, and placing needless strain on the healthcare system. That is the verdict of the Finnish TV doctor Eva Orsmond.

“Women who allow themselves to be overweight when pregnant are criminal and are putting their lives and the life of their baby to be put in danger due to serious health complications when in labour,” said Orsmond, who now lives in Dublin.

By the same logic, old people are an undue strain on the healthcare system for allowing themselves to become old. Never mind all those old people who eat well, exercise and live happily regardless of their age. Lock these criminals up!

It’s worth keeping in mind that Orsmond made a name for herself in Ireland by telling fat people how to lose weight. She’s published a lot of diet books, too, so you might say she’s got skin in the game. Fat-shaming is good for business.

As a journalist I’m sad to say that the media is also good at demonising overweight pregnant women. (And by the way, I hate the word overweight, because it suggests there’s a normal weight to be, but, because most of the medical studies I reference use it, I do too.)

With headlines like: “Overweight pregnancy increases risk of birth defects,” it’s no wonder people feel comfortable passing judgment on fat women out of “concern” for their health. But as a fat, pregnant woman, I am here to tell other pregnant women not to panic. What Orsmond and much of the media often fail to do when they make these sensationalist statements is put the numbers they’re repeating into perspective.

That same study found that, while fat pregnant women were three times as likely to get pre-eclampsia, the risk was already so small that a three-times-increased chance just wasn’t that scary. In fact, 93 per cent of the pregnant women with a BMI over 35 in that study didn’t develop pre-eclampsia.

I’m not saying that these risks aren’t a valid thing to bring up in a doctor’s consultation, I’m only saying that people like Orsmond or other GPs and media outlets don’t have to make complications sound so inevitable.

There are also studies that suggest fear and anxiety in pregnant women have adverse effects on the unborn child: poor brain development, shorter gestation, lower birth weight, increased risk of miscarriage. How about laying off us for the sake of our mental health? Or do concerns about fat people’s wellbeing not extend that far?

There are few resources out there that offer evidence-based or positive pregnancy stories for fat pregnant women – trust me, I’ve looked. Don’t even think about trying to find a plus-size nursing bra. And the only open and honest plus-size pregnancy journey by a high-profile fat woman I’ve been able to find was the model Tess Holliday’s. I’ve found Plus Size Birth to be good and Evidence Based Births, but these are US websites and, as we know, there’s plenty of fat women elsewhere in the world.

According to a study by the University of Antwerp, 20 per cent to 25 per cent of pregnant women in the UK and Ireland are overweight. In Europe, that number ranges between 7 per cent and 20 per cent, depending on the country.

That’s a lot of women.

The overwhelming majority of whom are delivering perfectly healthy babies with no extraordinary issues or complications every single day.

Those are the facts. Hold on to them, my fellow fat preggos.

The odds are in our favour.