‘Mixed-gender lavatories would allow me to keep track of Tony’

‘I have to loiter outside men’s lavatories while Tony uses them. Sometimes he takes for ever’ 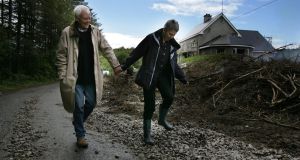 Those were the days . . . Steph and Tony Booth walking near the house they were renovating near Blacklion, Co Cavan in 2004. They are now back in England. Photograph: Frank Miller

A few weeks ago Tony and I rented a small cottage in Suffolk near Aldeburgh in England. For a number of years I have suggested we visit, but have never gone beyond making the suggestion. It is an area neither of us know. Given we live on a relatively small island you would think by now we would have travelled at least all of England. But no. I think some of our reluctance is part of our northern heritage. London was seen as, if not quite Sodom and Gomorrah, then running it pretty close – “that London”. By default the south-east was also questionable.

Suffolk is a long way from West Yorkshire. A fact I became deeply knowledgeable about after spending over five hours in the car with someone who has advanced Alzheimer’s. All of us who have had children know the interminable questions of, “Are we nearly there yet?” and cries of, “I need a wee.” Children can be distracted with story tapes, I Spy, picnic boxes and finally by going to sleep. While the questions remain the same those strategies do not work with Tony. I have discovered one solution: BBC Radio 3 puts him to sleep. Except for opera: that energises him.

The route to Suffolk is mainly motorways. Motorway service stations form a particular corner of hell. Especially on those occasions we are both desperate for a wee. Thank goodness I was rigorous about pelvic-floor exercises after the birth of my sons. I have to loiter outside the men’s lavatories while Tony uses them. Sometimes he takes for ever. I then have to rely on him waiting outside the ladies while I dash in. As we know, the ladies often has a queue. If I go out to check on Tony I risk losing my place. Though most people will keep my place for me, if the queue goes down quickly I am doomed.

I have no issue with mixed-gender lavatories. Continental Europe seems to have no hang-ups with the idea. It would allow me to keep track of Tony. It would also be more practical and sensible for parents and adults accompanying children.

However, we made it to the cottage. A stiff gin and tonic restored my equilibrium – destroyed thoroughly the following day when England lost to Ireland in the last match of the Six Nations. It pains me to admit Ireland did deserve to win the game. In all fairness, they played their socks off. (Indeed they did, Ed).

Suffolk is a beautiful county. We were bowled over. Our cottage was in the grounds of a big house. We were gifted with absolute peace and quiet as there was no mobile signal in the immediate vicinity. The weather was warm and sunny. The roadside banks full of primroses and daffodils and the empty beaches perfect. Living in the Pennines, the flatness of Suffolk was a new experience. Huge, endless skies.

We pottered about treating ourselves to long, pleasant lunches and exploring ancient churches and picturesque villages. Tony has never forgiven the Normans for their 1066 invasion. He does not have a good word to say about them. He was pleased to be in the land of the Angles and reminded of times pre-Norman. He speaks of Hereward the Wake as an old friend.

Although it was a lovely week, the reality is another such journey would be too much for Tony. He still loves new places and the opportunity to talk to different people, but he wants his own familiar surroundings. After about four days he wanted to know when we were going home. I was able to distract him and we did stay for the full week. Day trips rather than holidays are are sufficient for him now. Another phase in our life is over and we readjust to the next.

We had a few relatively peaceful weeks after we returned from Suffolk. At this stage in Tony’s illness we never have entirely calm days. Recently, though, life has become much more difficult. Tony’s memory and behaviour have declined again. He is trapped inside his own head, but that space is now so small and confined. The frustration is almost unbearable for him. It seems he can only release it by being unpleasant and horrible to me. I am relieved to see him go off to the day centre. They tell me he is fine there – although he is mostly asleep. I am not sure how long I can cope if we do not soon reach a better space. Coping with Tony’s behaviour is one thing, but it is almost unbearable to watch the disintegration of the man I once knew. Where will it all end? Please God let him go to sleep one night and his weary heart give out. Please do not allow his suffering to drag on and on until there is nothing left – a shell of skin and bone.

Ever since I was a little girl I have tried, without success, to find a pebble with a hole that went all the way through. These are the magic pebbles. I have scoured many beaches. When Tony and I were in Suffolk I found two. One in Dunwich, the other in Walberswick. They now hang, strung together, in our front porch. I found some magic.

Lockdown letters: ‘Life is all about making connections’
9