‘Military service makes you think about your aims, and helps you to develop self-discipline’ 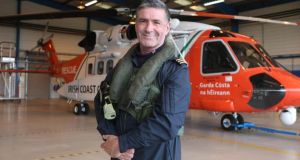 I spent 21 years of my life in the Air Corps, mainly on search and rescue with the Alouette helicopter and then moving to the Dauphin, which was equipped for night-time flying. My training in search and rescue was on the winch, which is the equipment used on a helicopter to recover a casualty from the water, or a cliff-face, or a mountain, or whatever.

Medical training is part of this, as we all have to have paramedic skills to administer first aid or to keep an injured casualty stable until the helicopter reaches an ambulance or hospital.

On winch crews, you start out by being the person who is lowered down on the line or strop – “the dope on the rope” as some of my colleagues call it – to effect a rescue. It’s only after you have acquired sufficient experience that you then become a winch operator, working with the person on the winch and with the helicopter pilot and crew to maintain a safe hover position, and recover both crew and casualty safely into the aircraft.

Winch teams trained up for both tasks often rotate, with the operator having first-hand experience of the conditions he or she is exposing a colleague to. It just happens to be “he” most of the time, as we have a number of female pilots but no female winch crew.

Military service sort of sets you up for life as it makes you think about your aims, and helps you to develop self-discipline. You make lifelong friends, and it opens doors and allows you to do all sorts of things.

Jurgen Whyte was Dauphin commander on duty, with co-pilot Jim Corby, myself and Ben Heron. It was a very difficult rescue with an enormous swell, and Arranmore lifeboat coxswain John O’Donnell had to pull the fishing vessel around so we could see the deck and try to get on board.

The other was from the British Shipwrecked Fishermen and Mariners’ Benevolent Society Award in 1992, for the rescue of crew from the French-registered fish factory ship Capitaine Pleven II in Galway Bay the previous year.

The factory ship had gone up on the Loo rock below Black Head. There were 57 on board: at first we thought they said “seven” on board when they called us out. I was flying with Harvey O’Keeffe, Sean Murphy and Chris Mehady, and we worked with the RAF, due to the large numbers involved.

I moved to the Irish Coast Guard in 2002, working for CHC Helicopters which had secured the Government search and rescue contract. By that time, there were four search and rescue bases: Dublin, Shannon, Waterford and Sligo.

I applied to be transferred to Shannon with my wife, Dara, and kids for quality of life reasons. At that stage, the children were in primary school and below: they are Aoife, Niamh, Conláed, and Tomás was the youngest, at just 10 months. Since then our family has grown and grown up: Cuan, originally from Vietnam, is now our youngest child. He is six.

I became senior crewman at Shannon in 2002 and then chief crewman responsible for standards in 2006, which involved a lot of management: audits, planning, reporting to the Pre-Hospital Emergency Care Council (PHECC) on compliance and for clinical practice guidelines approval. We had all been trained in first aid to emergency medical technician (EMT) standard, but we then converted to the paramedic system, which takes a lot more time.

One of the projects I was involved with was recruiting “street paramedics” to become winch crew on helicopters: previously, we would have recruited winch crew and then trained them as paramedics. It has proved to be a very suitable model which has been copied by services in other countries.

However, I decided to go back to flying this year, as it was a job I always really loved. Since the Irish Coast Guard began to lease the Sikorsky S-92, we have aircraft with longer range and better cruising speeds, as well as high-speed dual hoists and a very advanced inpatient care system. This means we have been tasked on many helicopter emergency medical service (HEMS) missions, as well as search and rescue.

I had kept a limited hand in, so it wasn’t too traumatic to return full-time. The slagging was the worst. The senior crewmen and women in Shannon were only delighted to be able to put me through my paces.

The June bank holiday Monday was my first day on, and we had planned to go training, but then we got called out on a search in Kerry.

A car had been parked near a cliff edge. You have certain expectations in a situation like that, but we didn’t find anyone.

The shifts are 24 hours – you sleep at the base unless you live close by – and while we were airborne on Tuesday we were tasked for two missions. One involved two casualties who needed to be flown to University Hospital Galway from the Aran island of Inis Mór. They were two senior ladies with two very different complaints.They were both just delightful, and you get enormous satisfaction out of a job like that, as it is giving support to the islands in situations where a crossing might be too rough by lifeboat.

On Wednesday, we were called out to search for a missing person on the River Shannon in Co Limerick, but we had no luck, unfortunately. We then responded to a request from Derrynane inshore rescue to train with it.

Every three months we have to repeat our own training, and fatigue risk management and good communications are also important parts of the job. We have a briefing and a debriefing before and after each flight, and there is a “no blame” culture where people are encouraged to speak openly about issues. That way we all learn, and it is nothing personal.

In the early days it might have crossed my mind at night to be a bit nervous, but it’s a perception thing. Training is so intensive that it becomes automatic: we are not running out of here in a panic.

Only a few months before, Paddy Mooney had offered to paint my house here, as I had put my back out. I recently painted the house again, and couldn’t stop thinking about him. Some of us return to Tramore every year on July 2nd, walk the beach and think of the families of those four men.

I watched my dad’s funeral by webcam from France
10