Medical matters: Want to learn how to save someone’s life? 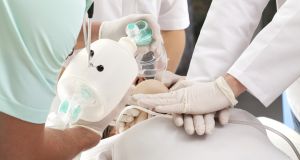 Good things can come from a shocking event and every second Saturday groups of up to 120 people at a time gather at Killarney racecourse. They are part of a group called Operation Resuscitation and they are learning how to recognise a cardiac arrest, perform CPR and use a defibrillator.

The shock that mobilised this group was the death of 16-year-old Tom Geaney a year ago after he collapsed while playing soccer. Another player and a coach performed immediate CPR and his parents Killarney GPs John Geaney and Fiona Gallagher shocked him back to life with a defibrillator. Tom was one of the few who are lucky enough to receive immediate care seconds after the arrest because the people on the scene had been trained to handle the emergency.

Research shows there are 5,000 cardiac arrests a year in Ireland. Of these, there is a survival rate of only 5-6 per cent. In Seattle, where 70 per cent of the population are trained in immediate cardiac care and where it is part of the school curriculum, 60 per cent of these patients survive.

The first minutes after cardiac arrest are crucial; if immediate care skills are implemented the chances of survival increase dramatically.

We have been accustomed to seeing defibrillators in shopping centres, sports clubs and meeting points. They look impressive, but often nobody knows who is responsible for them , who has the key and who is trained in their use.

The coverage in the community is sporadic and haphazard. While there are many laudable local schemes, there is a lack of cohesion and no national planning or continuity. Several types of training and equipment are used and many local initiatives have become defunct.

Operation Resuscitation was formed by Tom Geaney’s parents John and Fiona as a pilot scheme in Killarney. Volunteer trainers instruct adults and children in is a short and simple American Heart Association course showing how to recognise cardiac arrest, how to do CPR and how to use a defibrillator.

Six hundred local people have been trained since the initiative began in November and the aim is to train 50 per cent of the community. They also plan to have drop-in classes to help participants maintain their skills. Graduates have already successfully resuscitated two people who had a cardiac arrest episode.

“It is amazing to see people willing to come out in the worst weather in years in order to protect their friends and neighbours from cardiac arrest,” said Fiona. The scheme, she says, has the potential to save hundreds of lives if adopted nationwide.

Another aim of Operation Resuscitation us to convince the incoming Minister for Education of the merits of introducing basic life support skills to schools.

Eleven schoolboys from St Brendan’s College Killarney are involved in a young social innovators project to get the minister on board. As they point out, Sweden has been teaching basic life support since the millennium. They argue that the time has surely come for Ireland to follow suit. The Killarney community hope that their Operation Resuscitation will form a template that will spread to the entire country, but say more instructors will be needed and State support will be essential.

I was in Killarney last Saturday. The Kerry Stars Special Olympics team and their coaches, Dr Crokes GAA club, Muckross GAA club and the local SuperValu staff were all taking part in the training. The only cost was €10 per adult and €5 per child. It seemed like a small cost to save a life. The training took two hours and the atmosphere was relaxed and friendly.

I met Tom Geaney. He is a fit looking young man with a marvellous smile. I found it chilling to think he is alive because his companions had taken the initiative to learn CPR. That terrible day a year ago seems far away now, but it may have a huge impact on the health of the nation.