Medical Matters: Should doctors prescribe a course in mindfulness? 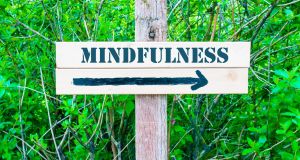 Exactly how mindfulness helps alleviate symptoms is unknown, but there is evidence of its effect on brain structures emerging from CT and MRI scans

Mindfulness has become quite a buzzword of late. An ancient Buddhist practice, it is seen as being especially relevant to our modern frenetic lives. Jon Kabat- Zinn, an author and mindfulness teacher, who has played a central role in broadening the appeal and use of mindfulness, describes it as “simply the art of conscious living”.

It is a “systematic process of self-observation, self-inquiry and mindful action . . . the overall tenor of mindfulness practice is gentle, appreciative and nurturing”, he writes.

With the “coming” of mindfulness there has been an explosion of interest in its potential uses. Inevitably, the corporate world has got involved; not everyone is happy with the rebranding by multinationals of mindful meditation and practice as a means of increasing productivity and corporate compliance.

On a more positive note, mindfulness is being taught in medical schools in the US, and researchers have begun to investigate the possible benefits of mindfulness interventions for conditions such as cancer, stroke, multiple sclerosis, pain, anxiety and depression.

Is there any evidence yet for the health benefits of practising mindfulness? A recent study published in the Lancet found MBCT to be as effective as a maintenance dose of antidepressant medication for preventing depression relapse. Investigators randomly assigned all 424 participants to an intervention group receiving MBCT (while either tapering or discontinuing antidepressants) or a control group continuing to take maintenance antidepressants; they then measured relapse rates over 15 months and at two years after intervention. Of patients in the MBCT intervention group, 44 per cent relapsed over the course of the study compared with 47 per cent of patients in the control group.

A separate study found a modest improvement of symptoms among patients with post-traumatic stress disorder who completed an eight- week MBSR programme. And a more recent overview found MBSR and MBCT interventions may help treat not just depression but also anxiety, pain, and other chronic conditions. Collectively, the evidence suggests mindfulness practice has a small to moderate benefit on health.

Exactly how mindfulness helps alleviate symptoms is unknown, but there is evidence of its effect on brain structures emerging from CT and MRI scans. After an eight-week course of mindfulness practice, the brain’s “fight or flight” centre, the amygdala, appears to shrink. This region of the brain, associated with fear and emotion, is involved in the initiation of the body’s response to stress. As the amygdala shrinks, the pre-frontal cortex – associated with higher order brain functions such as awareness, concentration and decision-making – becomes thicker.

In 2011, Harvard researchers showed that mindfulness meditation can actually change the structure of the brain: a course of MBSR was found to increase cortical thickness in the hippocampus, which governs learning and memory, and in certain areas of the brain that play roles in the regulation of emotion.