Living with the ‘sissy issue’ of men’s eating disorders

There is more pressure than ever on men, exacerbating an already dangerous crisis 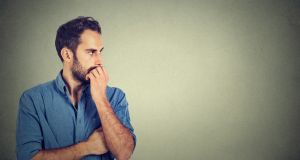 Men suffer from eating disorders, but can face stigma when they talk openly about their condition. Photograph: iStock

When looking back at his experience of anorexia, Andrew* says it was “a complete nightmare” and that he sometimes wonders how he survived the ordeal.

While Andrew and many more men suffer from eating disorders, they often face stigma when they talk openly about their condition. Women are much more likely to be diagnosed with anorexia, bulimia or a binge eating disorder than men, meaning the conditions are often seen as a woman’s health issue. This was something that affected Andrew hugely when he finally sought help several years after he developed an eating disorder.

“I read a lot of books, but they were all very gender specific,” he says. “They were all about women. There was no mention of ‘he’ in any of the books, it was all ‘she’ and ‘her’, and that was kind of soul destroying in a way. It’s like you don’t exist, there’s nothing to describe you at all.

"You’re off the radar. When you’re off the radar, you think where do I go for help? That was the point that I realised there was nobody coming to rescue me, and so I read as much as I could and I did a lot of research. I spoke to people and I came up with a solution; I started to recover.”

“I consider myself to be a proper bloke, and there is a judgment there that it’s a feminine disorder, so it’s very difficult. It’s a very isolating experience, but I think it’s more so for men because you feel like you’ll be judged and shamed for it. You can’t really come out of the woodwork and say what you are.”

Marie Campion, founder of the Marino Therapy Centre, says men with eating disorders continue to face huge stigma, often from their families and loved ones.

“I’ve seen it with so many families, where they’ve said ‘my son suffers from depression’, or ‘I couldn’t accept that my son has a sissy issue’,” she says. “A lack of understanding causes stigma. Eating disorders in men have always been there, we just didn’t see them.”

Campion has been working with people with eating disorders since she founded the Marino Therapy Centre 25 years ago. She says there is more pressure on men today than ever before, which is exacerbating an already dangerous crisis.

“Sometimes it’s the influence of commercialism. We see about 3,000 ads a day; 50 years ago, you wouldn’t have seen that in a lifetime. Every ad tells you that you’re not good enough and most of them are about self-improvement. For men, there is much more pressure, because they’re meant to be gentle, hardworking, earn big money and own a nice car. The pressure on men has never been so extreme.”

This is something that Barry Murphy, communications officer with Bodywhys, the national organisation for those with eating disorders, echoes.

“I think there’s a big emphasis in our culture on physical appearance,” says Murphy. “The problem we see in eating disorders is that there’s often distorted thinking, and I think some of the messages that we see around appearance are not helpful, because they equate physical appearance with success and popularity. The emphasis isn’t really on health, it’s about having a particular body type or body shape.”

However, both Murphy and Andrew note that modern image-obsessed culture is not the main cause of eating disorders.

“Generally, eating disorders are not caused by something abstract,” says Murphy. “The cause is often something close to a person’s head or heart. This is problematic as it makes it difficult to talk about and the underlying factors can sometimes be masked by the eating disorder and be difficult to treat until they’re unpicked. Causes can range from trauma to bullying.”

Andrew agrees with this, saying that advertising plays a part, it cannot be blamed for eating disorders. “They help perpetuate something that is already underway but they don’t create them in the first place. Eating disorders, at their core, are created by trauma. It could be one major event or it could be a lot of smaller yet still powerfully destructive events that occur over years.”

Worryingly, eating disorders are now appearing at a younger age than ever before. The latest preliminary research indicates that the peak age for the development of anorexia is from 14-16. With bulimia, the age bracket is 14-22. Unfortunately, because many men do not report or present with eating disorders, research on eating disorders in men has been limited. Murphy says the area has been “under researched and under reported”, which only adds to the myth that eating disorders affect only women.

Today, Andrew has recovered from anorexia after several years of therapy. While he says his eating disorder was a nightmare, he stresses that with work and dedication, it can be overcome. Andrew gained control over his life again four years ago.

“At the beginning, it was like a brick wall. I felt it was going to be impossible to overcome this. When I stopped trying so hard, things started to happen. This hole started to form in the wall. And I realised that all along I was sort of fighting myself. I had always viewed the eating disorder as an enemy that needed to be overcome. But really it wasn’t an enemy, it was something that was there to protect me from what was behind the wall.”

Breaking down that wall is essential to recovering from an eating disorder. Campion says that despite what it might feel like, recovery does exist. “Just give yourself a chance, you deserve more. Never give up working on yourself.”

*Andrew’s name was changed to protect his anonymity. His identity is known to The Irish Times.