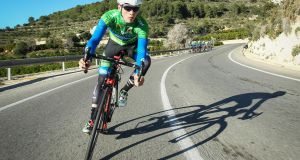 Daniel Stewart: ‘When cycling became my occupation, it fuelled my woes rather than extinguished them.’

I stopped cycling as a full-time occupation in March 2016. Shame delayed the announcement.

Once upon a home voyage, I awaited a train in Nantes Gare. A soldier came up to me, and I was addressed in a friendly French tongue.

I responded in grunts of bewilderment. Realising his audience was an English-speaking oaf, his lips tensed as he forced out foreign words,

I flipped the €2 that was needed to get the man of duty on his way. With a goofy smile and a “chow”, I wished him well on his journey to wherever, for whatever.

When I got to Dublin and realised I needed that €2 to get me to Belfast, my thoughts were I really hope your man was actually a soldier.

That experience always made me think. Not about my lack of organisation and my general incompetence; but my reasoning to giving my last monetary scrapes to a soldier, and not anyone else.

“Why should I deserve all this support when so many people are not as privileged?” I was happy to hugely inconvenience my journey home to help a soldier out, but why would you do it for an underperforming cyclist?

Exhausting bank accounts, help and the European public transport system enabled me to push my mental and physical capabilities to the limits.

Money, bikes, hope, time and effort were thrown at me throughout my cycling career, to no avail. Doubt and insecurity crept into my life and laid down their anchors. Every failure hit me harder and harder.

Throughout 2015, I lived mostly on my own, in a ghost town in northwest France. Shutter Island had become embedded in the centre of Brittany; consisting of a bakery, a hairdressers and a tabac.

I hated living there. When I went out on the bike, eyes burnt into my fluorescent pink kit, as everyone in the little village documented my movements.

It got to a peak, when the baker had pre-prepared all the things I was going to ask for, before I got there.

In November 2015, I encountered Jake Bailey on my phone screen, while staying with my girlfriend in London.

Diagnosed with terminal cancer the week before, the head boy of Christchurch Boys High School rolled onto the stage in a wheelchair, delivering a scintillating speech which soon became a viral YouTube hit.

Bailey was so pale and so weak, but the fire still surged from his eyes.

Two brown microcosms of optimism and passion radiated into the camera, rejecting his body’s degeneration.

Enthusiastically, he urged his peers to make the most of their gifts, in a moving 20-minute address.

“Let others leave their future in someone else’s hands, but not you. Of course doing this will mean at some point we may have to face our fear of falling short. Fear of looking like a fool. Fear of not being enough.”

Bailey crippled me. Emotions crumbled out as I was swallowed by my girlfriend’s bed.

Disgust and distain seeped into my being like never before. Why can a man staring death in the face be a beacon of motivation, encouragement and positivity; while I am just a wretch?

My girlfriend rushed in and told me I had a problem. The internal monologue of personal, hateful slander had to stop. I made a promise to seek help.

I held the promise, and went to see a therapist to help me with my, mostly abnormal, thoughts. Depression and anxieties had leaked into my mind and distorted my view of life.

Things got a lot worse before they got better as I started lifting my sub-conscious barricades and ventured into my darkest thoughts.

But I still rode my bike. The colour-coded TrainingPeaks calendar remained green, as I focused on making 2016 the best season yet.

Coming into the new year, I was the strongest I’d ever been. When times were tough, I thought, “Give it two more years, and see what happens.”

I kept plugging away, hoping the stars would align.

But the stars never would. A sticky web of weaknesses lined my conscience, as the season started.

I no longer felt like the young boy at Orlock, whizzing up the Springwell.

I was fitter, stronger and leaner than ever, but the feeble inaccuracies I still had melted my remaining self-esteem away.

Races were no longer about pushing hard, about enjoying the quest to the limit. They became a sobering highlighter of disappointment, of how I still was not good enough.

The unknown distance of necessary improvement crushed my soul every time I pushed down on the pedals. But I still kept faith. I refused to give up. I refused to be associated with the cyclists who had given up before me. I wanted to be the one who prospered, not the one who failed.

Enveloped in emotional turmoil, my flight to Belgium got closer and closer. I desperately pleaded with myself to wise up, and get on the bloody plane. But I just couldn’t. Enslaved by the unanswered questions wickedly dancing in my mind’s eye, I had to give up.

Abhorrent, black weeks followed. I was walking into a wall while remaining in cycling; but when leaving it I felt I had turned around to walk into a wall directly opposite.

Demons from another department started to plague my head. They made me avoid seeing anyone I knew from cycling.

They made me not want to ride my bike for the potential of being spotted. They made me a slave to my own existence.

But I survived. I received a lot of help and am better for it. Now, a few months on, I feel it was definitely the right choice. I feel better, less stressed and more determined to enjoy life.

An exercise fanatic from no age, I’ve realised that physical exertion was my coping mechanism for depression. When cycling became my occupation, it fuelled my woes rather than extinguished them. This is what led to the downward spiral.

I still love every minute of riding a bike. I am trying to pack my weeks with any sport I can think of, because now I know it gives me peace of mind.

To finish, I send a message out to two sets of readers:

To the full-time cyclists, I commend you. Cycling is in a new light, for me, now. Every cyclist projected on a television screen earns every ounce of airtime.

To the depression sufferers: you are not alone, and you are the reason I wrote this post. I took no pleasure creating it and I am glad to finish it. If you have started your journey to vitality, I wish you all the best.

If you are still on your own, talk to the right people to make things right. You will be alone if you act alone. Seek the right help and you can fight it. It is a horrible illness, but one which is made to be beaten.