How does sleep affect your running? 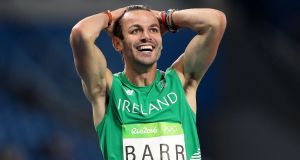 Irish Olympian Thomas Barr is not just a champion hurdler; he’s a champion sleeper too. The likeable 24-year-old – who narrowly missed a medal in Rio – spoke to “Health+Family” about coping with the physical demands placed on elite athletes. “Recovery is just as important as training, and diet and sleep are its two most important aspects,” he says.

“As far as sleep is concerned, I usually aim for nine hours, with eight being a minimum except in rare circumstances. I’m not a man for napping so I need my sleep to ensure I can give 100 per cent at each training session, morning and evening.”

Scottish ultrarunner Donnie Campbell studied the running performance of Kenyan athletes. “When fellow ultrarunner Dr Andrew Murray and I were in Iten, Kenya, studying why Kenyans dominate middle and long-distance running, we noted that rest and sleep played an important part of their training, with some athletes sleeping up to 14 hours a day,” he says.

In 2005, in her heyday, one of Kenya’s greatest long-distance Olympians, Lornah Kiplagat, now a Dutch citizen told “Runner’s World” that she typically slept for 10 hours a day. “During the day I probably sleep two hours, and eight hours during the night. When I sleep, I am out until further notice; I sleep well.”

However, a recently published review in the “Scandinavian Journal of Medicine and Science in Sports” has some surprising findings. Lead author of the study, Dr Norah Simpson, clinical assistant professor at California’s Stanford University, found that many athletes don’t get enough sleep when compared with non-athletes. “Athletes tend to sleep less, 6.5 to 6.7 hours per night, and athletes’ quality of sleep is lower,” she explains.

The researchers also found that poor-quality sleep adversely affects performance. Simpson and colleagues cite evidence from a study of subjects undertaking a cycling test after a single night of partial sleep loss. It found that their heart rates and oxygen consumption were increased. Another study of college tennis players found that when they slept an extra two hours per night, their serving accuracy improved from 36 per cent to 41 per cent.

Simpson’s review also found evidence that sleep makes you less susceptible to illness; sleep helps regulate pain, with athletes who sleep well being better able to tolerate pain; and insufficient sleep increases the risk of injury, with one study finding that adolescents who slept less than eight hours per night were 1.7 times more likely to get injured compared with those who slept for more than eight hours.

So how did Waterford’s record-breaking Olympian Barr manage to sleep while preparing for the greatest athletic event on earth and in a different time zone?

“When we first arrived in Brazil the beds were very warm, and because of the time difference my body took a day or two to adjust to the new sleeping pattern. Then it was business as usual. I found it tough after the semi-final, which was at about 9pm local time, to fall asleep as I’d just pushed my body hard, and my heart rate took a while to drop . . . especially as I’d just run the race of my life to qualify for an Olympic final, and I was pretty excited!”

Barr is clear that sleep and diet are crucial for an athlete’s recovery from training and competition. His advice for young athletes keen to emulate their hero, but inclined to stay up that bit later at night is to get at least eight hours.

“When balancing school or college and training, sleep is vital to get through the day, so aim for a minimum of eight hours or so.

“Try to forget any worries built up in the day; they can wait till tomorrow. And let your mind wander; that always works for me if I find it hard to drift off. I used to be a worrier, but I think I’ve become a lot more laid back, which has helped me to relax quite quickly when it comes to bedtime.”