Have you ever been ‘Ice’d’ by your doctor?

Breaking the ice that threatens the doctor-patient relationship 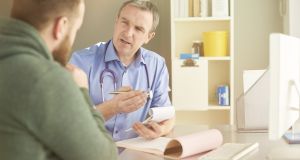 Don’t you hate it when [doctors] ask you what you think is wrong? Photograph: iStock

‘I never asked to be Ice’d” was the headline over a recent British Medical Journal article, written by the journal’s patient editor. Intrigued, my initial reaction was to wonder how had such violent Mafia terminology entered the lexicon of medical communication?

Rosamund Snow writes about a friend who, after a recent visit to her GP, asked “Don’t you hate it when [doctors] ask you what you think is wrong?” The friend was sorely tempted to reply, “Why don’t you know? You’re the bloody doctor.”

Snow subsequently learned that her friend had been “Ice’d”. An acronym for Ideas, Concerns and Expectations, Ice is taught in medical school as a communications tool to help discover what a patient may be really worrying about so doctors can deal with those concerns.

In fairness these techniques come from a desire to create more balanced consultations; an effort by doctors to practise holistically rather than reduce their patients to a crop of symptoms.

Of course, the real impact of questions such as these depends on how they sound and, most importantly, how they make the patient feel. Spoken mechanically, as if following a computerised checklist, Ice is bound to strike a raw nerve – as it did for Snow’s friend.

She reserves her sharpest criticism for one training website which suggests asking patients about their “darkest moments”, or “what are your worst fears?” How can that possibly end well, she asks?

Most doctors who responded to the article agreed with the author. “The Ice questions are a template to help those who are not good with spontaneous communication to get started, they are not the end, but the launch pad to, over a period of time, understanding the patient’s expectations, fears, and worries,” said one family practitioner.

Another suggested avoiding the formulaic questioning of patients: It’s best for the doctor to share their thoughts as they go along; knowing why the doctor asks a particular question will tend to elicit a more helpful answer.

And while it is vital for every doctor to find their own voice and phraseology to make questions sound natural, approaches such as the following are less likely to get patients’ backs up: “That sounds worrying for you – can you tell me a bit more as to why it worries you so much?” or “I guess that you’ve had some thoughts about what could be done for your problem. Would you like to tell me a bit more?”

“It didn’t take long. I had already started to trust her in the first 15 seconds.”

Snow concludes by observing that she now understands why doctors Ice her. “But an acronym can’t build rapport; it’s just another checklist. And it feels like it, on the receiving end.”

And in my opinion it’s yet another example of why “tick-box” medicine will never work.

So next time you feel uncomfortable in a consultation, instead of exclaiming “Well, you’re the bloody docto,” you could smile pleasantly and ask “Am I being Ice’d?” You never know – it could break the ice that threatens to sink your doctor- patient relationship. mhouston@irishtimes.com @muirishouston