Since the 1970s Denmark has come top of the Eurobarometer survey on happiness. Here’s why 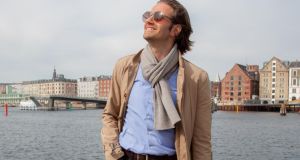 Meik Wiking, director of Denmark’s institute for happiness research: ‘I never worked so hard, earned so little or had so much fun.’ Photograph: Carlos Manuel Sánchez

The interesting thing about Meik Wiking, who studies happiness, is that he’s terribly happy. In fact he’s never been happier. He loves his job as director of Denmark’s institute for happiness research, otherwise known as Institut fur Lykkeforskiving. This means that, even when you’re interviewing him in Copenhagen during a rainstorm, his passion for his subject makes you happy too.

Meik Wiking’s name is pronounced Mike Viking, and he was a civil servant with the Danish ministry for foreign affairs, with a degree in public administration; a background that, he says, is no bad thing in his current work. “The subject of what drives happiness has moved from being a philosophical question to something that’s examined with an econometric approach,” he says.

Studying happiness has had a marked affect on Wiking’s own life. “I prioritise social relationships,” he says. “I try to develop better networks. I meet with a few friends and we cook together. We men are not as good at remembering to see each other.”

Happiness has become quite an undertaking, with both the UN and OECD performing large international studies to examine, as Wiking puts it, “what happy people have in common”.

One of the things happy people have in common is that they live in Denmark, as Wiking does.

Last month, scientists from the University of Warwick revealed that Danish people have the longest version of the gene that helps our brains to take up serotonin readily. The French have the shortest version of the gene. The Danes are so happy that the happiest people in the world are those whose genetic makeup is most similar to theirs.

Since the 1970s Denmark has come top of the Eurobarometer survey on happiness, which is completed every six months. Ireland comes ninth.

At the moment the happiness institute is not investigating catastrophes such as suicide, but rather the nuts and bolts of everyday life. For example, work. It is conducting a survey about work, commissioned by one of the biggest trade unions in the country.

“There is a misconception that happiness is something that happens outside work,” says Wiking. Danish work practices and management techniques take happiness very seriously indeed. “It just makes good sense,” he says, “that happy workers are productive workers. It’s part of the culture. There is a low level of hierarchy in the Danish workplace.”

This comes partly, he thinks, from the Danish church, a form of Protestantism that emphasises community and equality.

One of the main drivers of human happiness is a sense of meaning, or of purpose in life. If a person’s sense of purpose increases even very slightly it has a remarkable affect on their life satisfaction as a whole.

But the factor that has the highest impact on your happiness is what the happiness researchers call your social relationships, or how connected you are with the world. “It has the highest of all correlations with happiness,” says Wiking. “Higher even than your general health.”

Intervening to reduce people’s loneliness is one of the fastest ways to have an impact on the happiness of a population, he says.

“The number-one silver bullets for this are our community gardens, which are open 24/7, and carry no stigma, not like having people visit you. Also, community gardens are used by many different groups from young mothers to [older people].”

Perhaps we could raise our rate of opening community gardens, because the Danes are certainly going to.