Take a bow, Chris Nikic, for holding tight to your dreams – and completing an Ironman 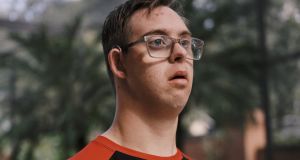 The Florida sky had grown dark, and Chris Nikic felt ready to quit. He had been pushing through the grueling race for more than 13 hours, even though he could not navigate the course or keep the time without help.

It suddenly became too much. In the hot, humid air, he struggled to breathe. His feet burned as they pounded the pavement, his legs felt like concrete, and it seemed as if the muscles in his back had been put through a shredder.

Nikic, a 21-year-old who lives with his parents in an Orlando suburb, had started the day with determination. If he could overcome the challenge of this race — a 2.4-mile open-water swim followed by a 112-mile bike ride and a 26.2-mile run — and do it in less than 17 hours, he would be the first competitor with Down syndrome to complete an Ironman triathlon.

Such a feat would not just put him in the record books.

It would also prove to himself and those around him that he could, in fact, do big things. And if he could do big things, then maybe one day he would be able to fulfill his ultimate dream: to live independently and have a wife and a family of his own.

Would he make it?

The finish line was 16 miles away, but he was breaking down.

It was then that Nikic summoned a well of patient, hopeful perseverance — along with the energizing power of the simple vision he had set for his life.

To understand the long odds Nikic faced during that race, held in Panama City Beach, Florida, on a recent Saturday, you have to go back to his childhood.

At five months old, he endured open-heart surgery. He was so weak and had such poor balance that he did not walk on his own until he was four. To keep him from choking, his family fed him baby food until he was six. When he learned to run, it took months for him to discover how to swing his arms at his side instead of holding them straight above his head.

It took years for him to learn how to tie his shoes.

His parents – Nik, a corporate performance trainer, and Patty, a stay-at-home mother – struggled to get their son proper care and attention. They moved him to seven schools, searching for the right fit. At every turn, experts spoke of Chris Nikic in terms of limits instead of possibilities.

“I always felt isolated, left out, excluded,” he told me during a video call this week, describing the emotions that he felt growing up.

He found solace in sports. By his early teens, he was running sprints, swimming and playing basketball in the Special Olympics. When he was about 15, his parents took him to a parking lot near their home and taught him to ride a bike. It took six months for him to go 100 feet, but once he got the hang of it, there was no turning back.

After undergoing a series of ear operations that sapped his strength and left him homebound, he grew determined to do more than he ever had before

Last October, with the help of a local endurance training group and Dan Grieb, a volunteer coach, he set his sights on the Ironman. It was the ultimate test. Conquer it, and he felt he could do anything.

Nikic and Grieb began meeting in the predawn hours for 20-mile runs and 100-mile bike rides. Focused on making small improvements each day, Grieb helped him learn how to shift gears and balance. How to ride with the wind. How to relax while swimming in the ocean, even around jellyfish.

Something was changing. He added muscle to his stocky 5ft 10in frame, but it was more than that. Everyone around him noticed that as he grew fitter, he seemed mentally sharper, more attentive and confident.

“Based on all of his training, I was certain he would finish” in under 17 hours, Nik Nikic said. “Unless something went wrong. Something can always go wrong.”

A stiff wind swept across the Gulf of Mexico in the early morning on race day.

Grieb was there in the water as a guide, tethered to his charge by a black bungee cord meant to offer extra safety. They emerged from the choppy sea in a little less than two hours.

Grieb then helped Chris Nikic onto his 10-speed bike and fixed his feet onto the pedals, and they began the long ride. There would be trouble ahead. Because Nikic could not balance well enough to drink water while riding, he had to stop and climb off his bike to hydrate. When he did that on the 22nd mile, he had not noticed that he was standing atop a large mound of red ants, which swarmed his ankles and bit at his flesh, causing his legs to swell.

He managed to get going again, only to crash his bike a few miles later while speeding down a hill.

Again, he kept on.

Then came the marathon segment. It began well enough. Looping through the streets of Panama City Beach in the nighttime darkness, tethered to Grieb so he would keep from falling and stay on course, he passed a clutch of family and friends who cheered in support.

But at mile 10, everything changed. He slowed so much that it seemed he was barely moving at all. He began complaining about the pain. There was anguish in his eyes. “He looked like a zombie,” said his sister, Jacky. “Like he was just absolutely done.”

His supporters huddled around him, giving hugs, hoping to lift his spirits.

Nik Nikic clutched his son, drew him close and whispered in his ear, “Are you going to let your pain win, or let your dreams win?”

Chris Nikic knew this wasn’t only about finishing an Ironman, but about showing himself what he could achieve in the future. His own home. Independence. A wife as kind and beautiful as his mother.

He found his rhythm. Nothing could stop him. He crossed the finish line with arms held high in celebration, and a little time to spare – 16 hours, 46 minutes, 9 seconds.

“I learned that there are no limits,” he said when we spoke days later. “Do not put a lid on me.”

Take a bow, Chris Nikic, for holding tight to your dreams, for your patience and hopeful perseverance and guts. We could use a little more of that in this world. – New York Times