Stretch yourself: the key to good health in our sedentary society 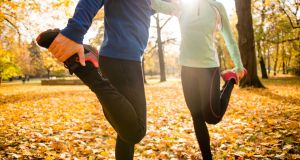 Warming up correctly can give you an edge by helping you prepare physically and mentally for the race ahead.

Our cat Saffie agrees with what the Earl of Derby, Edward Stanley, said in 1873: “Those who think they have not time for bodily exercise will sooner or later have to find time for illness.” Although Saffie hasn’t endorsed the earl explicitly, she implies it by example: proper sleep; eating sparingly; regular physical activity; and – she’s doing it now – stretching.

Someone who knows a lot about stretching is former international triathlete and duathlete Phil Mack, who represented both Great Britain and South Africa. He was also strength and conditioning coach for the South African Springboks rugby team, spent three years in Belfast with Ulster Rugby, and consulted for Derry GAA.

Mack told The Irish Times that stretching helps maintain good health: “We live in a sedentary society, which encourages stiffer bodies, poor posture and loss of joint range of movement, all of which can lead to injury or pain. Stretching, which comes in many forms? Yoga poses, Pilates techniques and dynamic or static stretching can all play a role in maintaining or improving joint and muscle range of movement. When combined with light exercise for 30 minutes a day and with a sensible diet, stretching will help promote a healthy lifestyle which is realistic and sustainable.”

One outcome of our sedentary society mentioned by Mack is an increased prevalence of postural problems, sometimes accompanied by neck and shoulder pain. In a recent randomised controlled trial reported in the journal Clinical Rehabilitation, Thai researchers allocated 96 office workers with moderate to severe neck pain to one of two groups. Both groups received ergonomic advice on positioning, seating etc. However, the treatment group was instructed to perform neck and shoulder stretching exercises twice daily, five times a week for four weeks. The stretching group reported significantly greater reductions in neck pain, and the researchers stated: “A regular stretching exercise programme performed for four weeks can decrease neck and shoulder pain and improve neck function and quality of life for office workers who have chronic moderate-to-severe neck or shoulder pain.”

For those with more active lifestyles, such as running, the importance of stretching has evolved from my cross-country racing days many years ago, when the pre-race warm-up entailed sitting in a car with the heating on. Today, there is hardly an aspect of running without a corresponding evidence base, and that includes the warm-up. A warm-up prepares the body for the physiological challenges to come, aims to enhance performance and helps reduce the risk of injury. The traditional elements of any warm-up are sub-maximal aerobic exercise, sport-specific movements and static stretching and/or dynamic stretching.

According to a 2014 review in Current Sports Medicine Reports, “Static stretching involves lengthening a muscle and holding it in a mildly uncomfortable position for a period, usually somewhere between 10 and 30 seconds. Dynamic stretching uses momentum and active muscular effort to lengthen a muscle, but the end position is not held.” The review cites studies of athletes running distances greater than 200m, which show that “. . . static stretching prior to activity has been found to be detrimental to performance. However, other data indicate that static stretching has no effect on endurance performance . . . But it is notable that no study shows a performance benefit from static stretching performed prior to these activities.”

And when researchers investigated the “Effects of Static Stretching on 1-Mile Uphill Run Performance”, they reported in the Journal of Strength and Conditioning Research that “… athletes may be at risk for decreased performance after a static stretching bout. Therefore static stretching should be avoided before a short endurance bout.”

So what should we be doing at a practical level? Mack, whose international reputation in the rehabilitation of injured elite and recreational athletes ensures he is kept busy at his chain of sports injury and physiotherapy clinics in Edinburgh and the Scottish Borders (thephysiotherapyclinics.com), says: “How you stretch can be as personal as the type of exercise or sport you choose. The key is finding what works for you, and if you are not sure, try out a yoga or Pilates class as a starting point. This will give you a feel for what stretching can do for you.”

Dynamic stretching, says Mack, is typically used before exercise, as part of a warm-up: “It helps to stimulate the nervous system, brings blood to the muscles, raises the heart rate and generally helps prepare the body for functional movement. Static stretching is typically used after, or separately to, a workout. However, although it may be beneficial for increasing flexibility, it tones down the nervous system and prepares the body to relax and release rather than stimulate.”

Whatever your goal, suggests Mack, warming up correctly can give you an edge by helping you prepare physically and mentally for the race ahead: “Practise different sport-specific warm-up strategies to find what works for you. Ensure you progressively increase your heart rate using similar activities to your race and couple this with dynamic stretching of the main muscle groups involved. Finish your warm-up with a couple of short high-intensity bursts a few minutes before you start. However,” adds Mack, “stretching should not be painful or rushed, and never over-stretch as you’ll probably do more harm than good.”

I could continue, but that would be stretching a point.

What a heavenly home: from dilapidated church to chic retreat
10