Is running in city air good for your health?

Pollutants rarely exceed health limits, but women may be affected more than men 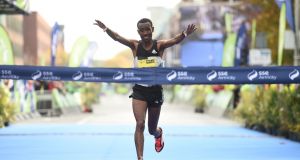 When Dereje Debele Tulu won this year’s Dublin Marathon he ran through streets with an air quality superior to that of the 1980 inaugural race. In fact, Dublin’s Air Quality Index for Health (AQIH) was designated as “good” for this year’s marathon.

Launched by Ireland’s Environmental Protection Agency (EPA) in 2013, the AQIH is calculated hourly, and ranges from one to 10, with 10 indicating very poor air quality and one, two or three are classed as “good”.

In 1980s Dublin, however, the switch from oil to cheaper bituminous coal heralded a period of high pollution, associated with increased in-hospital respiratory deaths. This was noted in a 2002 report in the medical journal Lancet, which recalled that, following the 1990 banning of bituminous coal from Dublin, “[A]bout 116 fewer respiratory deaths and 243 fewer cardiovascular deaths were seen per year in Dublin after the ban.”

Their report in the journal Medicine and Science in Sports and Exercise cites some interesting facts. For example, an athlete running a marathon in about three hours at 70 per cent of maximal oxygen uptake inhales the same volume of air as a sedentary person inhales in two days.

With sustained deep breathing through the mouth, as occurs in a marathon, one expects air pollutants to reach the lungs’ deepest recesses. But could it adversely affect performance?

Marr and Ely analysed course records and the finishing times of the top three men and women in seven US marathons (stretching back from 2007 for up to 28 years previously) held in Boston, New York, Chicago, Minneapolis/St Paul, Duluth, Sacramento and Los Angeles, making a total of 168 race years.

They also examined weather records and compiled recorded air pollutant data for ozone, carbon monoxide, nitrogen dioxide, sulphur dioxide and particulate matter of 10 microns – one micron is one millionth of a metre or less (PM10).

The researchers expected that since most marathons are at weekends – when vehicle pollutants and ozone concentrations are low – the marathon performances of men or women would be unaffected. They were wrong.

They found that the concentration of most pollutants rarely exceeded recommended health limits. However, even low concentrations of PM10 were significantly associated with reduced performance for women but not men. For instance, for every 10 microgram increase in the PM10 content of one cubic metre of air, women’s marathon performances could decrease by 1.4 per cent.

Why should coarse particulate matter in the air affect women more than men? Women’s larynxes have smaller openings than men’s, and because women’s tracheas are almost one third smaller than men’s, relatively greater numbers of coarse particles tend to accumulate in women’s upper airways.

Also, during a marathon, inhaled pollutants prompt the vagal nerve – a long nerve supplying the lungs, stomach and other organs – to reduce the depth of breathing, but increase the rate of breathing. The associated discomfort may prompt women to slow down.

Interestingly, in the men’s Olympic Marathon in Beijing, and despite relatively high PM10 concentrations, the winner set a new Olympic record; but in the women’s race the first three finishers were 2.6 per cent slower than the Olympic record.

Aerobic exercise, such as running, is linked to cognitive improvement, whereas PM exposure from traffic exhausts, for example, is linked to inflammation and cognitive decline. Belgian researchers compared two groups of volunteers who undertook a 12-week aerobic training programme – one group in an urban environment; the second in a rural environment – and underwent cognitive testing. Writing in the same journal, they concluded that aerobic training in an urban setting with high traffic-related air pollution increased markers of inflammation, but in addition, “in contrast to aerobic training in a rural environment, cognitive performance [in a specific cognitive task] did not improve”.

In September this year, in her address to the Environment Ireland conference, EPA director general Laura Burke highlighted the importance of “green spaces” such as parks, forests and farmlands, and “blue spaces”, such as rivers, canals, lakes and coastlines.

“The concept of ‘green and blue prescriptions’ is now being explored in Ireland as a tool to improve community health and wellbeing,” she said.

Such prescriptions constitute formal written advice from a health professional to spend time in the natural environment.

“During 2012 a trial of ‘green prescriptions’ was conducted in Ireland and found to reduce obesity and to improve physical and mental health in nine trial groups across rural and urban communities around Donegal,” Burke said. “Along with the measurable outcomes, such as positive impacts on blood pressure, the participants reported that engagement with nature was also associated with an improvement in mental wellbeing.”

According to the EPA, the World Health Organisation estimates that ambient air pollution in cities and rural areas caused 3.7 million premature deaths worldwide in 2012. And at a European level 4.494 million years of life were lost due to fine particulate matter in 2012. Of this total, the estimate for Ireland is 14,400 years of life lost.

The health benefits of running are clear, but politicians have a duty to ensure that Ireland’s outdoor environment – especially its urban spaces – provides high-quality air to breathe.