Body-positive yoga: ‘Wow I didn’t know that fat people can do that’

Jessamyn Stanley isn’t white and she isn’t skinny. She sees neither as a hindrance to her yoga 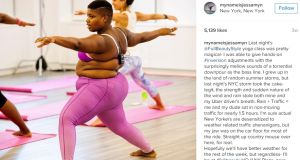 Jessamyn Stanley has over 200,000 followers on Instagram account , where she posts photos of herself in complex yoga poses.

Jessamyn Stanley teaches yoga. She has written a book about it. She travels the world giving seminars to her fans – 200,000 of whom follow her Instagram account , where she posts photos of herself in tight clothes, contorting into complex poses. To anyone who follows fitness gurus on social media, this might all sound run-of-the-mill: another skinny white girl smiling smugly at the camera while doing the Flying Crow. Right?

Wrong. Stanley isn’t white, and she isn’t skinny. When her Instagram account first started to gain traction, she realized to what extent this comes as a shock to people. “I was getting responses to my pictures that said: ‘Wow I didn’t know that fat people can do that’,” she said.

When Stanley started uploading the images of herself to Instagram in 2012, she said she did so to get feedback from the online yoga community about her form and technique. Among the comments from other yoga enthusiasts, however, people also said that Stanley had inspired them.

A caption on a photo from 2014 reads : “I am so glad you have this page and I found you. Before seeing you in these pictures I didn’t think this was possible. Thought I had to lose 100 pounds before doing anything like this. Thank you, thank you, thank you.”

Stanley was shocked; she’d never considered that her body might be a hindrance to her ability to take up any form of physical activity. She had a few hang-ups about her size, but never saw that as a reason not to be able to do yoga.

There’s a major disconnect in our society between what people can do and what we show people that they can do, says Stanley.

Hey y'all, I'm literally about to walk into my yoga class, but I wanted to remind you that there's only a few days left to enter in the @lucyactivewear $250 gift card giveaway- you can click the link in my Instagram header to enter! This #partner campaign brought together a bunch of curvy babes that I admire, including @biggalyoga, @pinklip, @authemmie, & @plussizebeausion- and we are ALL WORKING OUT IN DIFFERENT WAYS. Because I'm always in this little bubble of curvy yoga goodness, I can forget that up until just recently, we were basically NEVER exposed to #plussize women being active unless it was on a Jenny Craig or Weight Watchers commercial. It means EVERYTHING that curvy women are finally being showcased in our athletic glory in non-weight loss contexts. It's probably one of the most important things that can happen for the #bodypositivity movement. Frankly, the movement has gotten kinda lukewarm- lately, it seems like anyone and everyone is trying to find ways to say they and/or their brand is "#bodypositive". But THIS- curvy women gettin their life at the gym/on the yoga mat/out in the wild for no reason other than the straight up adrenaline rush- THAT'S BODY POSITIVITY, y'all. Anyway, you should go check out how all those other amazing people are wearing their Lucy Activewear outfits if you want even more #fitspiration that breaks the mold. And if you're one of those brands/people out here just trying to make a buck off the body positivity movement, my boo @virgietovar has put y'all on notice and she's getting the rest of us in formation, too. #lucyforeverybody #mm Pants + Top- @lucyactivewear Fingers + Toes- @yogapaws

“When I was (first) photographing myself, I would look at the pictures and think, oh my belly is there and it’s fat,” she said. “But over time, I realised that I’m really strong to be able to hold these poses. My belly is there, and I’m still strong ... There’s a major disconnect in our society between what people can do and what we show people that they can do.”

It’s precisely because of this inclusive, body-affirming approach to yoga that Stanley has amassed her following. Stanley’s fans like her because they can relate to her and find her teaching methods refreshing . But as her popularity has grown, she has also become an accidental poster girl for body positivity.

Body positivity is a movement that encourages people to accept themselves as they are and to believe they’re capable of achieving their goals (fitness related or otherwise) without needing to change anything about themselves first. For Stanley, yoga is the physical expression of this principle.

“I feel like yoga is body positive because it’s saying you don’t need to be concerned about what other people think of you,” Stanley said. Doing yoga has shown her she’s strong and capable – both tenants of body positivism.

Stanley emphasised that while she thinks yoga can be a means for raising self-esteem, it can’t do all the work.

“I think that it’s shortsighted to think that yoga can make you body positive, because the real issue that you have to resolve is deeply embedded within yourself,” she said. “You need to start to ask questions of yourself that you were not asking before.”

Dianne Neumark-Sztainer, a professor at the University of Minnesota’s school of public health and a certified yoga teacher, agrees that yoga can be a vehicle for improving self-image. “There is some research that suggests that individuals practicing yoga are more aware of their bodies and less likely to objectify their bodies,” she said.

In Neumark-Sztainer’s research, which focuses on individuals with eating disorders, she found many felt less body shame and were more comfortable with their bodies as a result of doing yoga.

Stanley has joined other women fighting the idea that only people of certain sizes can do things. Earlier this year, Tess Holliday became the first size 22 (UK size 26) model to be signed by an agency. And within the fitness world, Roslyn Mays has proven there’s no such thing as too fat for fitness through her award-winning pole dancing .

How do you get bereaved fathers to talk? Bring a football
7

Yotam Ottolenghi: How to turn yesterday’s bread into a feast
9