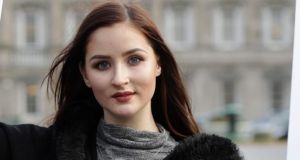 Emilie McCarthy at the launch their Why Are We Waiting? campaign. Photograph: Jason Clarke 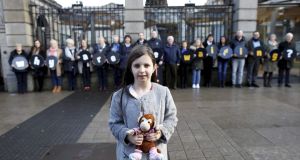 “My legs weren’t working properly while walking up the stairs and I was in a lot of pain. Her GP ruled out growing pains and other conditions and decided she should be seen by a paediatric rheumatologist.

“At the time there was only one in the country; the public waiting list was about two years long and the private list was about a year,” the Kildare woman explains.

Her family decided to go for the private list and thankfully, she says, her GP managed to get her a cancellation appointment within six months.

“By the time I got to see the specialist I could barely walk. I was diagnosed with juvenile arthritis. At this stage it was affecting almost all of my joints, from my jaw to my toes.”

Emilie was admitted to Crumlin hospital because she needed to be seen by physio and occupational therapy, along with having some procedures on her joints. She says she spent a lot of time as an inpatient in the next few years – “you get seen quicker as an inpatient,” she says.

But that was not the end of the delays Emilie faced in her ongoing treatment.

It’s cases such as Emilie’s that have sparked the WhyAreWeWaiting.ie campaign which is calling for the appointment of six new consultants to tackle a waiting list of 12,600 who have yet to see a specialist.

“We have 35 consultant rheumatologists and we’re looking for six more. We’d need 18 more to bring the numbers up to World Heath Organisation standards but six would make a big difference to waiting times.”

The campaign is calling on every election candidate to become an #ArthritisChampion and to support its 100-day plan to reduce waiting lists and save on the “colossal costs of undiagnosed and untreated arthritis”.

Nearly a million people across Ireland are living with arthritis, according to the organisation. “Some 12,600 people are waiting in crippling pain to see a rheumatology consultant, including 455 children. With delayed treatment, many people are heading towards disability.”

Now that Emilie is in adult care, she sees her rheumatologist publicly every six months. However she says she had a few referrals to different departments and surgeons that she had to go through privately as the waiting list was two years and sometimes more.

“I worry about the future as my disease will probably only deteriorate with age and the price of private healthcare is just not sustainable, even though it is sometimes my only option.

“I am only 22, but I worry about how I will cope in years to come when I have a family and more than just myself to look after. With more and more people suffering from arthritis these waiting times will only get longer and we will be left waiting in pain.”

I had suffered years of back pain since my early 20s. No doctor could diagnose anything but kept prescribing me painkillers and anti-inflammatory medication. Then in early 2014 I was sent to the emergency department in Tallaght hospital by my GP as I was suffering terrible pains in my chest, suspected blood clots in my lungs. After numerous tests - X-rays and blood tests etc - I was sent home with antibiotics and told I had a bad chest infection.

From those results my GP suspected arthritis. She advised me to see Prof David Kane, a clinical professor in rheumatology, in Tallaght hospital and suggested I go privately as the waiting list was too long even to just get a diagnosis. I took her advice and had an appointment within a week.

I see Prof Kane in his private rooms in Tallaght every six months. He is fantastic and has changed my life, but the treatment is expensive. My first visit was €240 and each after that is €130. I have been prescribed Enbrel injections weekly, which I give myself, so with the Drug Payment Scheme I pay €144 monthly, not including costs for my MRI and bone density scans, as well as many GP visits in the meantime. I’ve already spent thousands of euro on treatment and it’s less than two years since my diagnosis. But if I had waited on the public list, I would probably still be waiting in pain for that diagnosis, not knowing what was wrong with me and not having the right medication.

I work training healthcare workers but on a flexible contract. I cover my medical costs by sacrificing a lot in other areas. I cancelled my private health insurance because I just can’t afford it and it doesn’t cover anything other than hospital stay: the excess is €150 so none of my medical fees can be claimed as they fall just under that amount. I have had family support, too. I am aware other people have no option but to be left on a waiting list.

People with arthritis not only suffer physically but emotionally, too. They have to try to keep up jobs so they can afford their treatment. I am very lucky with my employer, but I know many others who are stressed and so worried about losing their jobs because of illness or hospital appointments, but they need their jobs to cover their healthcare costs.

I worry about my future, and if the day comes where I can’t work. At the moment I just live month to month: I’m not in a position to save money for the future.

However the reality of waiting lists means I just don’t have another option other than to pay for private care. But now that I have the proper medication, and with lifestyle changes such as diet and exercise, I hope to continue with a happy life.