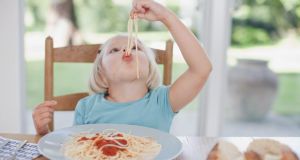 Spaghetti Bolognese is a meal lacking in fibre, but high in saturated fat and refined carbohydrate. Photograph: Getty Images

Safe Food Ireland (SFI) launched its campaign against childhood obesity, with billboards urging parents to reduce portion size. But blaming parents draws attention away from a defective food chain that the State is doing nothing to ameliorate.

Moreover, SFI’s choice of a plate of spaghetti Bolognese for its posters is puzzling as this is a meal lacking in fibre, but high in saturated fat and refined carbohydrate.

There is no hint of a vegetable, let alone the latest dietary guidelines in the US and UK advocating half a plate of vegetables or fruit.

The message is: there’s nothing wrong with what is on the plate, just serve less of it.

It is important to point out that the body mass index (BMI), the current measure of obesity, is a clumsy metric. Slim people often store fat in dangerous areas, especially around their stomachs. This is known as TOFI: thin-outside-fat-inside.

Moreover, up to a third of people who are clinically obese avoid chronic diseases; many athletes are categorised as obese.

Being overweight should not be stigmatised as once weight is put on, it is difficult to lose.

Robert Lustig, author of Sugar: the Bitter Truth, observed: “Once the balloon is filled, it doesn’t want to be deflated.” A person can be simultaneously healthy but overweight if they exercise and eat a healthy diet.

An evolutionary perspective suggests that refined sugar is unsuitable for our bodies. In The Story of the Human Body, Daniel Lieberman writes: “Since natural selection adapted the human body over the last few million years to consume a diverse diet of fruits, tubers, wild game, seeds, nuts, and other foods that are rich in fibre but low in sugar, it should hardly be surprising that you can develop illnesses such as type 2 diabetes and heart disease from consistently eating foods that are loaded with sugar but depleted of fibre.”

Social background
Paleo-biologists performed DNA footprint analysis of 3,000-10,000-year-old stool samples from caves in Texas and estimated that these cave dwellers consumed about 100g of fibre per day, yet our mean consumption is less than 20g.

Prof Mike Gibney, chairman of the Food Safety Authority, takes a different approach and this seems to inform Government policy. The author of Something to Chew On argues that the obesity epidemic is a simple product of insufficient calories being burnt.

He writes: “The fact is that every food category plays a role in obesity. For some it is fast food, for others it is big lunches and dinners.”

At a recent conference he argued against a “fat tax”, and downplayed the relevance of social background: “If social class is important in obesity, it is only if it is associated with a genetic predisposition to obesity.”

Yet no single “fat gene” has been isolated, and any genes associated with obesity long precede the recent upsurge.

Decreased energy expenditure is obviously a factor but so is the type and not just the amount of food we eat.

Certain foods do us more damage due to their hormonal effects and it doesn’t matter if we have a high BMI or not.

Tax on sugar
Refined carbohydrate, including sugar, causes a spike in the secretion of insulin, the hormone responsible for storing fat, and regular consumption can lead to type 2 diabetes.

Moreover, half a sugar molecule is fructose which is processed in the liver. As hunter-gatherers we encountered fructose in fruit (or rarely honey) which contains fibre which slows the absorption of fructose, giving us time to process it. But without it we either store it as fat in the liver or dump it into the bloodstream.

These fatty triglycerides block the action of insulin in the liver.

Fructose also does not act on the hormone ghrelin which causes hunger, meaning we don’t register these calories. That explains why soft drink portions keep getting bigger.

Sugar, especially high fructose corn syrup, became extraordinarily cheap after US corn began to be subsidised in the 1970s. Tellingly, obesity only began to feature in medical textbooks from that time.

It also acts as a preservative, ensuring long shelf life. In the United States, of the 600,000 items for sale, 80 per cent are laced with sugar. There is no data available for this country but we are unlikely to be far off.

I propose a carrot-and-stick approach to the problem. First, a tax should be introduced on products with high sugar content, especially targeting soft drinks.

Second, the display of such products in shops and supermarkets should be regulated in the same way as we treat tobacco.

In terms of a carrot, I believe revenues should be reserved for the promotion and subsidisation of whole food, plant-based nutrition, especially fruits and vegetables.

This is the best way of increasing the consumption of that missing fibre. It is also cheap and sustainable.

Low carbohydrate fads such as the Atkins and Dukan diets can cause a dramatic loss of weight but have dangerous long-term consequences. Dr Dukan has been struck off the French medical register while Dr Atkins developed heart disease and died obese.

Portion size
The real problems arise with carbohydrates when we strip them of their nutrients and fibre, creating white bread, white pasta, white rice and, worst of all, sugar.

SFI’s public information campaign reveals a lack of ambition and blames parents for structural problems in the supply of food that keeps the price of fresh, healthy food high relative to unhealthy alternatives.

If nutritious, high-fibre food is served to children they can eat until they are full and portion size will rarely be relevant.

Frank Armstrong is a food writer and teaches a course on the politics of food in UCD.

Quizmasters: ‘It’s not about being the smartest person in the room’
8