More people are living with cystic fibrosis than ever before, so the HSE needs to future-proof its services 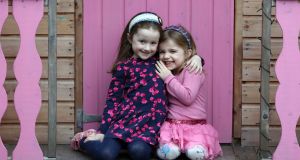 Mia Horgan and her younger sister, Amy. Mia was diagnosed with cystic fibrosis when she was just two weeks old. Photograph: Nick Bradshaw 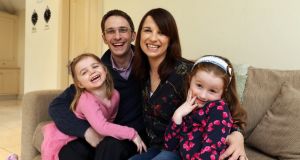 Rebecca and Barry Horgan’s daughter, Mia (5), was diagnosed with cystic fibrosis (CF) when she was two weeks old. Although neither parent had any previous experience of the condition, they were both carriers of the most common mutation of the CF gene.

Mia spent the first three weeks of her life in Our Lady’s Children’s Hospital, Crumlin. She had surgery when she was two days old to treat blockages in her bowel which was reversed when she was almost six months old.

“She developed on par with her peers but we had to give her prepared feeds with a high fat content because babies with CF find it hard to put on weight. She also takes vitamins and digestive enzymes which help absorb the nutrients in her food because her pancreatic enzymes don’t work,” explains Rebecca.

The Horgan family was also taught how to give Mia chest physiotherapy twice a day to clear the mucous in her lungs. And, from six months old onwards, she has been using a hypertonic nebuliser to help loosen the secretions in her lungs before each physiotherapy session. If she picks up an infection, she is treated with an extra antibiotic nebuliser after physiotherapy.

Prof Charles Gallagher, director of the National Referral Centre for Adult Cystic Fibrosis in St Vincent’s University Hospital, Dublin, says that people with CF and their families are among the bravest people he has ever met. “People with CF have the disease from birth . . . There is no time before CF,” he says.

The daily treatment regime can be onerous. “The average person with CF spends at least two hours every day of every year having treatment even if they are well and this time is much longer when they unwell,” says Gallagher.

Mia is now in junior infants. She’s an active child who does gymnastics and tennis. Her sister Amy (4) often joins her during physiotherapy sessions on the trampoline. “Mia has been quite well. She hasn’t had any hospital admission in the past two years. If she picks up an infection, we treat it at home. She knows she has CF. We are very honest with her in an age-appropriate way. And we’ve had great support from the medical team at Crumlin hospital.

“We don’t know what the future holds. The new drug, Orkambi, is specific to Mia’s mutation but given only from aged 12 upwards. It’s not available in Ireland yet but I think it should be made available.”

Clinical psychologist Dr Eddie Murphy also spoke at the conference, explaining the concept of emotional resilience and encouraging parents and those with CF to look beyond the illness.

“I want people to focus on other aspects of their lives so they are not defined by their illness,” he told Health+Family. “It’s important to acknowledge the adversities they face while looking at coping mechanisms and emotional health,” he explains.

“A per cent of what people experience is coloured by their CF but emotions like anger, sadness, guilt and even stress are emotions everyone experiences. I want parents to try to step back and let children become their own advocates.”

Dealing with the psychology of CF is important as children grow up. “Cystic fibrosis has become a more moderate condition in childhood with a greater focus on treating acute infections quickly and aggressively at home and at outpatient level,” says Gallagher.

However, as those with CF move into adulthood, other complications and other conditions can emerge. “Cystic fibrosis involves every part of the body. It can cause malnutrition and conditions such as diabetes, osteoporosis and muscle-weakening conditions,” explains Gallagher. “While we had moved on with the provision of services in the last decade, the healthcare needs of patients has also increased,” says Gallagher.

Cystic Fibrosis Ireland also draws attention to the uncertainty whether the HSE will pay for the innovative new drug, Orkambi, that Orla Tinsley has written about in this newspaper (The drug that gave me my life back, December 21st, 2015. Seehttp://www.irishtimes.com/life-and-style/people/ the-drug-that-gave-me-my-life-back-1.2466235. http://iti.ms/1Vqosrt).“This drug has the potential to impact on 50 per cent of the cystic fibrosis population in Ireland,” says Watt. “Despite the positive developments in CF in the past 10 years, there are still serious issues that need to be addressed.” Cystic Fibrosis Ireland’s annual fundraising initiative, 65 Roses, takes place on April 15th.

Cystic fibrosis (CF) is the most common life-threatening genetic disease in Ireland. Ireland has the highest prevalence of CF in the world.

Ireland has the highest number of the most severe genetic mutations of CF in the world.

About one in 20 people is a carrier of the CF gene and when two carriers have a child, there is a one in four chance that they will have a child with cystic fibrosis. There are about 1,300 people with CF in Ireland, one- quarter of whom are over 30 years old. One European study has predicted that the number of adults with CF will increase by 75 per cent by 2025.

Cystic fibrosis affects the glands, damaging many organs including the lungs, the pancreas, digestive tract and the reproductive system. It causes a sticky mucous to be produced in the lungs, blocking the bronchial tubes and preventing the body’s natural enzymes from digesting food.