Caring for our disabled daughter: ‘I fear for our marriage’

Alan and Johanna Powell are parents to a disabled child, Siobhan, who is 32. Now in their 60s, the Powells are seeking full-time institutional care for their daughter. Video: Enda O'Dowd 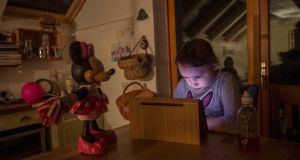 Coral Collier, who has a mental health condition, epilepsy, insomnia and mostly uses a wheelchair, spends most of her time with her iPad listening to music and watching cartoons. Photograph: Brenda Fitzsimons 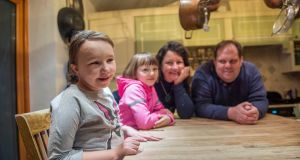 Coral Collier (9) with her sister Tanya (7) and parents Niki and Rem at their home in Dublin 8: “We are so isolated.” Photograph: Brenda Fitzsimons

“Our personal life is virtually destroyed. We’re a split family,” says Rem Collier. He and his wife Niki care at home for their daughter Coral (9), who has a serious mental health condition, type 1 diabetes and epilepsy.

On November 19th, The Irish Times published an interview by this reporter with Johanne and Alan Powell, a couple in their 60s facing retirement and still caring for their profoundly disabled daughter, Siobhan.

Exhausted and frustrated after more than three decades caring for Siobhan, for the past three years they have been seeking a residential care place for her. She is on a waiting list of 61 people in Co Wexford.

Since the interview appeared, The Irish Times has been contacted by several other parents of disabled children. Many other carers are under considerable stress. Each story was different, but all share one thing: they were desperate to be heard. “I feel, like the Powells, that this is a conversation that needs to be happening,” one parent wrote.

Niki and Rem Collier, who are both 43, were among those who got in touch. Bulgaria-born Niki and England-born Rem met when they were doing PhDs in UCD. They married in 2002 and their first daughter, Coral, was born in 2007.

“In layman’s terms, Coral was born with a syndrome that we were told is usually incompatible with life beyond about a year,” Rem says. Coral has Patau syndrome, or full Trisomy 13. In addition to her mental condition, diabetes and epilepsy, Coral is doubly incontinent.

She has some mobility, but usually uses a wheelchair outside. Coral will never lead an independent life. The Colliers have been unable to get a long-term prognosis for her, as she has already lived long beyond her original life expectancy.

Coral also has chronic insomnia, waking between 3am and 4am each night and not going back to sleep. Once she is awake, one parent must get up to be with her, because she is fully “on” and, if left alone, could be a danger to herself. Niki says that Coral has slept past 6am no more than once a year.

It’s usually Rem who gets up in the night to be with Coral. Niki then gets up at 6am to take over, and Rem tries to sleep for another hour or so, before getting up again to help get Coral ready for collection by the special school she attends, St John of God, in Islandbridge in Dublin.

The couple’s younger daughter, Tanya (7) has normal health. She also has to be got ready for school. “Coral’s needs comes first, so Tanya gets ignored a lot,” Rem says.

When the children are at school, Rem goes to work at UCD, where he lectures in computer science. Frequently – usually weekly – Coral experiences seizures at school and so one or other parent must be present, as she will be brought home early.

“Every step of the way, since she was born, it has been a battle to try and access services, or even find out what they are,” Niki says. “When she was born, at no time did anyone from the health services sit down with us and say, ‘These are your options.’ Even with our education and tenacity, we have not been able to understand how to get through the Irish system. Everything has been such a battle.”

Two years ago, the Colliers started to look for overnight respite for Coral. They approached the St John of God Menni Services, which offers respite for children with complex needs. They show me the letter they received on 16th July 2014 in response.

The letter – which misspells the Colliers’ surname – states that Coral’s referral was discussed at a recent admissions committee meeting. “Unfortunately, due to current pressures and emergency placements within our respite services, we are not in a position to progress with your application at present. However, we have placed Coral’s name on our tracking system and will be in contact with you when we are in a position to arrange an induction.”

“What’s a ‘tracking system’?” Niki asks. “We didn’t know what that was. How do you become a priority need? What do you have to do?”

The Colliers wrote to the Menni Services again, appealing to them to reconsider Coral for respite, describing it as “a lifeline that our family desperately needs to preserve our health and wellbeing”. They did not receive a response.

By the end of this year, Coral will have had 15 nights’ respite in the privately funded LauraLynn Children’s Hospice. The Colliers have nothing but praise for the LauraLynn organisation, but its key function is to provide hospice care for terminally ill children and support for their parents. It does not seem an appropriate place of respite for a child who is not in immediate danger of dying but it is the only respite service Coral has attended.

Coral has been offered one night’s respite a month in both January and February 2017, at Angels Quest, a respite home run in partnership with St John of God. There is no guarantee of any further respite after that.

“The situation will then be reviewed,” an email on November 18th from an Angels Quest representative informed the Colliers.

“We’ll take whatever we can get, but one night a month is not enough,” Rem says. “We asked for three nights a week.”

During the morning I spend with the Colliers, Niki breaks into tears four times, as they talk about their situation. Rem’s long-term sleep deprivation is evident in his face: his eyes are sunken deep into their hollows. He himself survived stage two melanoma in 2012.

“We’re a split family,” says Rem, “because only one of us can ever take Tanya out, while the other stays at home with Coral. Our only luck is that I still have my job; my employers have been so supportive.”

“We are so isolated,” Niki says. “Neither of us has family here and, in order to create a social network, you have to devote time to it, and we can’t do that because of Coral. Something has to give under this stress; unless we get respite for Coral I am afraid it is going to be our marriage. We have already lost almost everything else.”

Tanya Sweeney: It was never my place to ask why she wanted to die
6