Poems and music at hour-long event held mainly in silence 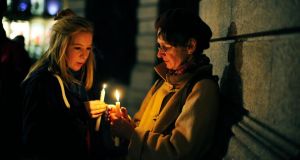 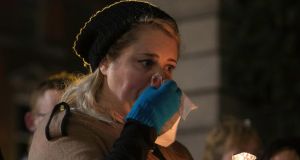 Linda Kavanagh from Galway at the vigil held in honour of Savita Halappanavar in Dublin yesterday evening. Photograph: Gareth Chaney/Collins

About 50 people gathered in Dublin yesterday evening with candles and lanterns to mark the first anniversary of the death of Savita Halappanavar. Poems were said and there was some music but the hour-long event was mainly silent.

Candles were lit in tiny paper lanterns bearing a picture of Ms Halappanavar, which were placed on the pavement outside the main gates to St Stephen’s Green, at the top of Grafton Street.

Among those present was Laura Harmon, from the Union of Students in Ireland, who said she was there “to express my sadness and solidarity with Savita’s family”.

Richie Keane, co-ordinator of Doctors for Choice, said it was important for him to be there to remember the dignity and pain of the Halappanavar family.

“We mustn’t forget that Savita should have had the termination she requested and that the dilemma for doctors in deciding when a threat to health becomes a threat to life is still there and we still need to address that issue.”

Barry Kyle and Dympna Reilly from Cavan said they had come to support the Halappanavar family and to “emphasise this shouldn’t have happened and it must never happen again”.

‘A terrible waste’
Naomi Keenan-O’Shea said she had been supporting the pro-choice movement since last year and had come to the vigil because it was “important to show support and to show your face”, while Shane O’Curry described Ms Halappanavar’s death as “a terrible waste”. “We don’t want this to ever happen again. So we are standing in solidarity with her family and with all Irish women,” he said.

Ann O’Cuinneagan said she had heard about the vigil on the radio earlier in the day and “just felt it was something I had to do to come in here this evening. Obviously it is important we are here to show our support to her husband and family.”

Earlier, in Ms Halappanavar’s home city of Belgaum, in southwest India, her father, Andanappa, and mother, Akhmedevi Yalagi, held a memorial ceremony at the Prajapita Brahmakumaris’ spiritual Centre, which was attended by several hundred people. Her father paid tribute to the Irish media for continuing to highlight the circumstances of their only daughter’s death and spoke of their continuing desire for “justice”.