Bruce Springsteen: a story of depression full of hope 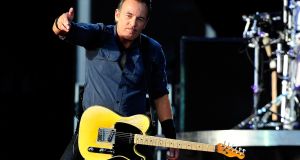 Bruce Springsteen on stage in London in 2013: thanks to psychotherapy and medication the singer found calm and stability. Photograph: Matt Kent/Getty Images

It may reflect my musical tastes, but my knowledge of Bruce Springsteen would be far from encyclopaedic. If pushed, I might have speculated about the rock star’s blue-collar background and left-leaning politics.

In fact, according to his just published autobiography, Born to Run, he hasn’t done a week’s worth of manual labour in his life. And as a child – “insecure, weird and skinny white boy” – he was teased about a nervous tic.

In school he was bullied, including being regularly upended into a rubbish bin. All of which seems light years away from his muscular, bedenimed onstage persona and hard-riffing musical performances.

But there are more surprises in store. His mental health is fragile. He takes antidepressants when he meets bouts of depression. This is what he had to say to Sunday Times journalist Nick Rufford:

“Depression will steal your life. It will take it right out from underneath you by the things you do. You’re under its sway. So psychopharmacology, for me and for my father, was very, very helpful.”

“Without [psychopharmacology], it’s much easier for things to come apart. So I kinda got to it at the right time. It restabilised my chemistry and personality and gave me my life back, which was slipping away between my fingers due to the fact that I couldn’t control my anxieties and my neuroses.”

You won’t find a better male depression narrative than this. The image of the illness taking life from under you is powerful but incredibly accurate. When faced with multiple anxieties and repeated bouts of depression, life can feel like it’s slipping through your fingers. And for many, the harder you struggle against it, the more depleted you become.

Which, as Springsteen points out, is where antidepressants and other psychoactive drugs have a role to play. The right drug, at the right dose and at the right time, can literally put a floor under a depressed person’s life. The incessant slippage finally stops, the seams of life slowly come together again, and the “breakdown” either comes to an end or is avoided.

The reference to his father is also significant. Mental health illness can run in families. Springsteen’s father said fewer than 1,000 words to him through most of his childhood, he tells us. You get a picture of an aloof, cold man, who – because of his demons– was unable to form a meaningful relationship with his son.

Had the rock star not recognised his own issues it is likely he would have had a fractured relationship with his children. As it is, he blames “ what was going on inside me at the time” for the break up of his first marriage to Julianne Phillips. Thanks to psychotherapy and medication, Springsteen found some calm and stability and the chance of a second marriage to fellow band member Patti Scialfa. He talks of working hard to spare his daughter and two sons from the turmoil he endured as a child.

Many men of Springsteen’s age will empathise with his revelatory narrative. Not all will have achieved a level of equanimity he describes. But for younger men it is a depression story that is full of hope.

You may be struggling with childhood abuse, parental rejection or other demons that lead you to self doubt and even self-sabotage. But if you work hard over time with a skilled psychologist, many deep seated issues can be dealt with.

It’s not an easy journey and you will be periodically knocked back. You may find it difficult to reach the decision to take antidepressants prescribed by your doctor.

But as Springsteen avers, drugs are often the first step to recovery. They will give you the mental and physical energy to set you on the road to feeling better.

Crucially, instead of feeling you were “born to run” away, you will want to stay and savour a life you may not otherwise have lived.