Ask the expert: Should we split the twins up in school? 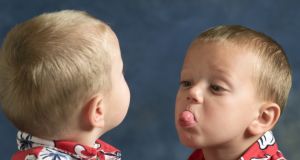 The hierarchy dynamic between twins and is very similar to the dynamic that can happen between two siblings in the same family who are close in age.

Q I have identical twin boys who just turned four over Christmas. They are two great boys, full of energy and most of the time they get on really well.

However, I am worried about a pattern of behaviour that is emerging between them. One of them – the eldest by 20 minutes – has become much more dominant and he seems to make the decisions all the time and I notice that sometimes he sets his brother up.

I observed the two of them playing recently and he tried to get his brother into trouble by making it out that he had knocked over a cup.

They are due to start school next year and we will have to decide which class to put them into. The school recommends putting them in different classes to help them to be more individual. Is this the best approach?

AThough the assumption is that twins, especially identical twins, always get on with another and are friends for life, they, of course, have their ups and downs like all siblings, and deal with rivalry and competition in similar ways.

Because identical twins look like one another, there is an added assumption that they have identical personalities and similar needs as children, which is not true as each twin is unique and a person in their own right.

Aside from the extra pressure of managing the demands of two small children at the same age, parenting twins brings lots of special challenges. In particular, you have the challenge of helping them develop their own identity and independence while supporting them to keep a good relationship with the other twin.

In your question, you talk about the emergence of a hierarchy between your twins with one becoming more dominant towards the other.

This is a common dynamic between twins and is very similar to the dynamic that can happen between two siblings in the same family who are close in age, when usually the older one can become dominant.

In helping them, I suggest you respond in a similar way to normal sibling rivalry, using the points below and reading a recent question about sibling dominance with two young girls (Health+Family, December 15th, 2015).

1 Coach them together in how to take turns and share. For example, if one twin answers for the other, you might gently intervene and say, “Let’s wait to hear what X wants/ it is his turn”. Or if there is a dispute, ask them both to solve it – “We have one toy and two little boys who want it, what can we do?”

2 Hold them both responsible when resolving disputes. Avoid singling out the more “dominant” one for blame in a fight or dispute as this leads to more resentment. Instead, hold them both responsible – “Come on boys, let’s see you both share now” – or discipline them equally – “You will both have to take a break now if you can’t agree.” In a dispute, try to guide and correct both of them, for example, “J, you should give your brother a turn,” and “P, you should tell your brother when you want something / tell him to stop when he is bothering you,” and so on.

3 Spend one-to-one time with each of them. Though the temptation is to treat your twins as a unit, just like all children they really respond to one-to-one time with their parents. Make sure this happens regularly. For example, Mam can play with one twin for a few minutes, while Dad reads with the other, and so on. By each parent having one-to-one time and developing an individual relationship with each child, their individuality is encouraged.

The second part of your question relates to your twins starting school and whether it is best for them to be in separate classes. Of course you have some time before you have to make this decision, though it is no harm to begin to think through some of the issues now.

While some schools may have fixed policies about this, in reality there is no one-size-fits-all approach to this decision and it depends on the individual needs of your twins and your family. In making this decision, you are balancing the need for your twins to be independent in different classes versus the security they might feel by starting in the same one.

The Twins and Multiple Births Association in the UK (Tamba) has an excellent information booklet for parents making this decision. It recognises that the needs of each family with twins are different and that the options open to them might be different – for some, it is not practical for twins to start in different classes.

In its own research, the group found that, on average, twins may benefit more from starting in the same class together, though they recognise that there are lots of exceptions to this – where the twins might have different educational needs or where there is a potentially dominant relationship between them. There is a helpful questionnaire in the back of the booklet that could help you think through the best decision for your own twins and your family.

Closely observe how the relationship between your twins develops in the coming months before you make a decision.

The dominance you are noticing now may diminish and it may be appropriate for them to share a class. Discuss the options with the school.

Dr John Sharry is a family psychotherapist and co-developer of the Parents Plus Programmes. He will be delivering a workshop on “Creating Balance in Your Life” on Saturday, January 9th, 10am-1pm, in Wynn’s Hotel, Dublin 1. See www.solutiontalk.ie for details. For more Ask the Expert columns, see irishtimes.com

Malachy Clerkin: Basically our daughter blew out her birthday candles, then the arse fell out of the world

What sold for €685k and less in Dalkey, Drumcondra, Sandymount and D16
9

‘We’ve got new lockdown rituals, but man, I miss the old ones’
10