Ask the expert: My 7-year-old son says he hates himself 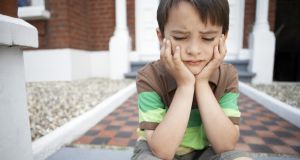 When you witness a burst of self-criticism, it is first important to acknowledge your son’s feelings and help him understand them.

Q My seven-year-old son can be really self-critical. When he can’t do something, he sometimes has a meltdown and starts saying that he is stupid or that he can do nothing or even that he hates himself. It is a bit shocking to hear him speak like this. I, of course, counteract this, saying that we love him and think he is great, but he doesn’t seem to listen. A lot of it seems to happen around homework, which is just starting to be substantive.

We mentioned it to the teacher and she says he is doing fine in class and would rate him as above average academically. It might be that he is a bit of a perfectionist and he expects too much of himself or something. It is hard to witness his outbursts of self-criticism. What can we do to help him?

AMany children have a perfectionist streak that can lead to them being very self-critical about their work and achievements. Like your son, many of these children can become very frustrated and upset when things don’t go their own way and they can express this frustration towards themselves in self-criticism and self-anger.

Not only can this inhibit a child from learning and damage their self-esteem over time, it is very hard to witness as a parent. While some aspects of perfectionism are down to personality, this natural drive can also be moulded and encouraged to be expressed more positively.

When you witness a burst of self-criticism, it is first important to acknowledge your son’s feelings and help him understand them. This means you might say “you sound frustrated” or “I know you wanted to get all those figures right – it’s hard when it doesn’t happen.”

The key is having an empathic, calm tone – you listen and understand but you don’t get upset in response.

This helps your son understand and learn to contain his feelings so they don’t escalate out of control.

Once your son has calmed down a little, it is helpful to get him to talk about what is going on in his mind when he feels that way. For example, if he says he is stupid, you might ask “What makes you say this?” It is important to ask this question calmly with an inquisitive tone. Once he answers then you can gently challenge the perfectionist idea underpinning it. For example, “Just because you got one wrong doesn’t mean that.” Or if he says people think he is stupid, you can ask “Do people really think that?”

In these discussions, your son might talk about other problems that you can help him with. For example, if he says someone called him stupid in school, you can acknowledge that was not a nice thing to be called but also ask him to think this through – “Why would a boy say that? Perhaps this boy is insecure or jealous. Does it matter what he thinks anyway?”

It can be helpful to sit down and explain to him that perfectionism is something “external” to him so he can learn to challenge it himself. For example, you could say, “Some adults and children think they have to do things perfectly. It is like they have a little voice in their heads that says ‘you are stupid if it is not perfect’. This voice can make you very upset when things aren’t perfect. But of course it is only a little voice that you don’t have to listen to. Does this ever happen to you?”

The goal is to help him put his perfectionist in perspective and not let it dominate him.

Avoid over-praising success which could aggravate his perfectionism and instead praise his efforts and what he has done right, whatever the outcome. For example, you can say, “You made a great effort, well done,” or “You spent lots of time on that work, that is great persistence.”

It is also important to praise him any time you see him managing his perfectionism – “You gave it another go in a calm way, that is great.”

You can also give him alternatives to some of the harsh self-judgments he might make. Instead of saying “I’m stupid” to himself, he could be encouraged to say “I did my best” or “I learn when I make a mistake” or “nobody’s perfect”. Make this into a game and get him to identify his negative thoughts and then write out replacement self-statements that he can use when upset.

It also matters how you talk about your own disappointments to your son. The more you can model a constructive way of managing your upsetting feelings, the more your son will learn from you. For example, you might talk out loud in front of him when something goes wrong for you – “I’m a bit disappointed that it did not go well . . . but hopefully it will be better the next time.”

One parent I worked with knew he was making progress with his perfectionist son when, after talking about something that did not go as well as he hoped, his son came in to support him saying, “Dad, don’t worry, you did your best, that is all you can do.”

Finally, it is important to remember that there are many positives to the perfectionist side to your son’s personality such as drive, energy and attention to detail. Your goal as a parent is to encourage these positive aspects while reducing the negatives by encouraging more self- compassion and acceptance.

Dr John Sharry is a family psychotherapist and co-developer of the Parents Plus Programmes. He will be delivering a workshop on “Creating Balance in Your Life” on Saturday January 9th, 10am-1pm, in Wynn’s Hotel, Dublin 1. See www.solutiontalk.ie for details. For more Ask the Expert columns, see irishtimes.com

‘The lockdown might be driving you stir crazy, but some of us are used to it’
6

Coronavirus: €19 takeaway from Michelin-starred restaurant sells out in minutes
7

Older people on isolation: ‘I have plenty of food but not much appetite’
8

A journey through the Americas: Is this the end of the road?
9

It's one of Ireland's most important prehistoric sites, but you may not have heard of it
10