A friendship that thrives through breastfeeding 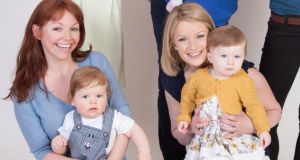 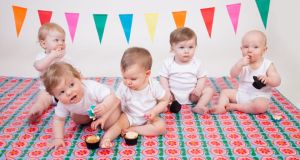 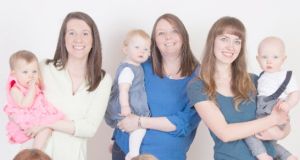 The five babies were all born within a fortnight of each other, and celebrated their first birthdays in March. Their mothers are celebrating the fact that they have survived the past hectic 12 months with their first babies, and actually enjoyed them.

“It’s been a lot more fun than I expected,” says Vanessa Robinson, who is mother to Fia.

Everybody agrees they would like some photos of real, tired first-time mothers instead of the impeccable women they see in advertisements purporting to be the mothers of tiny babies.

These women meet up to take their babies swimming on Fridays, and for a more general meeting once a month. Just two of them have returned to work. Aoibheann Coffey, mother of Aisling, is a teacher. And Rachel Keane, mother of Dayna, works in a bank and can make only the weekend meetings. “I really miss the group,” says Keane, on the phone from her office during her lunch hour.

They all say the support of other mothers has been invaluable, particularly in the early days when they found themselves home alone with a tiny baby.

Ciara Gallagher, mother of Arthur, is 39. “My friends’ kids are all at school age, and I’m having a baby now.”

“The way she sold it to me was that it was a chance to get the babies weighed and meet other women,” says Robinson.

They all agree that, faced with a small baby and a long day – and probably having endured a very long night – this offer was pretty much irresistible.

At the time all five women were living in the Terenure area of Dublin, although two have since moved. In fact, Robinson and Coffey were living in the same apartment complex when they had their babies, but never met until they came to the mother and baby group. All had had their babies at the National Maternity Hospital in Holles Street and four were part of the community midwives scheme.

“I’d definitely do it again,” says Coffey. “For the follow-up alone.”

A public health nurse might visit a new mother only once in the first week, whereas, these women say, “some of us under the community midwives got five days of visits during the first week”. And that’s when first-time mothers – and fathers – need experienced help.

“After the first night we were both at the end of the driveway, waiting for the midwife, Kate,” says Gallagher. They all say a book on how to handle a newborn when you get them home would be very welcome.

As it was, the members of this group who had community midwives saw them whisking in and out to see them in hospital “four or five times a day”, bringing pamphlets and literature with them.

The women here felt well supported, with families who lived relatively nearby, and – in the cases of Leader, Keane and Robinson – mothers who had breastfed in their day.

When the group met in the church hall of Christchurch in Rathgar they were struck by “girls from the country” who had no family in Dublin and didn’t have the level of immediate support they enjoyed.

And they were apprehensive about how they would be treated if they attempted to feed their babies in public. “I’d heard horror stories,” says Coffey. “But I haven’t experienced it.”

Soon they were going for coffee after the meetings, at the Bijou cafe in Rathgar village, where they were made very welcome.

Within the HSE group the youngest babies were always given priority so they gradually became more independent of it, supporting and informing each other. “In the early days the babies lay on us and slept as we sat and chatted,” says Keane. Now the babies socialise more.

Their attendance at the official HSE group ended when the babies were six months old, and that is when they decided to keep meeting.

Returning to work is a live issue for these young, educated women. Coffey is a teacher and was able to re-enter the working world gradually. “I know I’m lucky,” she says. Her baby, Aisling, goes to a childminder who has four children of her own, including a baby.

Keane had always planned to return to her work in a bank. She went back after Christmas, when Dayna was 10 months. “I was looking forward to it. I feel very supported in my place of work. I even got counselling there about returning to work.” In fact, one of the women who counselled her at the office had been part of the same breastfeeding group herself, five years ago.

Asked what they would wish for at the end of their first year, the mothers laugh as they mention a dishwasher, a detachable breast and a baby who sleeps through the night.

The overwhelming impression of them during this conversation, however, is of great calm. And not one baby cried during the whole thing. To find HSE support groups in your area, see breastfeeding.ie. There are are also bottle/formula feeding support groups; contact your local public health nurse or primary care centre.