1916: Granny was a freedom fighter but never spoke about it

Tom Clonan: Our grandparents fought for independence at a time when PTSD was unheard of 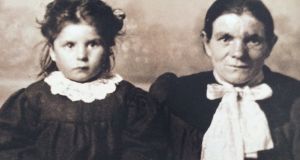 I will be 50 on this 100th Anniversary of the 1916 Rising. Like many of my age group, I have vivid memories of grandparents who were participants in the events of 1916 and the War of Independence. My grandmother, Maireád Ní Beaglaoch, a national school teacher from Killorglin, Co Kerry, was radicalised by the events of 1916.

She joined Cumann na mBan in Kerry that year and was eventually attached to the 6th Battalion IRA South Dublin Brigade. She had moved to Dublin to teach in Louise Gavan Duffy’s Scoil Bhríde off Stephen’s Green from 1919 until her retirement in 1965. She was a teacher by day and freedom fighter and arsonist by night – participating in many operations and attacks on RIC stations and British Army targets in the Dún Laoghaire, Cabinteely, Shankill and Bray areas.

My grandmother doted on me, calling me ‘an gamhain breac’ (speckled calf) because of my freckles. She told me stories and taught me songs as Gaeilge. She never spoke of the Rising or the War of Independence. It was only when she died in 1976 that I learned of her involvement.

As she was an army officer, I found her file and notes in the military archives at Cathal Brugha Barracks. I also have her War of Independence medal. In the original presentation box, she had written in her beautiful handwriting, “My Most Treasured Possession”.

Some attribute this silence to a stoicism associated with that generation. A no-nonsense demographic not given to displaying emotions. A generation not given to the public or private “confessional” moment – not to mention the type of self-disclosure that has become a feature of contemporary culture.

People also tend to characterise participants in these events as male, using terms and clichés such as “the men of 1916” and imagining them as “strong, silent types”. Nothing could be further from the truth.

To begin with, women played a hyperactive role in the events of Easter 1916. There were about 100 women involved in the combat. I use that word advisedly. They were not cooks or nurses, they were active participants in the fighting.

In urban warfare, bombs and bullets do not distinguish between male or female, adult or child. This knowledge is informed by my own direct experience of similar combat conditions.

As an army officer in Lebanon, in the spring of 1996, I and hundreds of other Irish troops – confined mostly in fixed positions – experienced a prolonged bombardment during the Israeli Operation known as “Grapes of Wrath”.

Trapped in our observation posts and patrol bases, we were subjected to weeks of artillery and missile strikes on our positions along with assaults from direct-fire weapon systems launched by Israeli forces. Hundreds of innocent Lebanese men, women and children were slaughtered in the fighting and crossfire that ensued between Hizbullah and the Israelis.

Under siege and an onslaught of direct fire – while confined within fixed positions such as the GPO, City Hall or Boland’s Mills – the rebels of 1916 were exposed to the text-book risk factors for PTSD (post-traumatic stress disorder) recognised in medicine today.

Like Irish troops in Lebanon, the 1916 insurgents – both men and women – were exposed to hostile fire night and day. They would have witnessed at first hand horrific injuries and fatalities among their comrades. They would also have seen injuries inflicted on British troops and ordinary Dubliners – including children – caught out in the open.

The type of injuries inflicted by Lee Enfield .303 rifles – standard issue for the thousands of British troops deployed to Dublin to suppress the Rising – would be catastrophic. The .303 bullet is a high-velocity round that causes a gaping exit wound. By modern standards, it is a heavy calibre bullet which causes massive internal injuries to soft tissue, rupturing organs and shattering bone. Such wounds would resemble the battlefield injuries sustained in close-quarter urban combat of the type seen in contemporary Syria, Iraq or Afghanistan. In other words, those who were shot in any of the rebel garrisons would have had very ugly wounds that were difficult to treat.

The depictions of such injuries and death in popular film and television programmes about the Rising tend towards sanitised imagery. As in the cowboy movies of old, British soldiers and rebels alike tend to simply and politely fall down after the bang-bang of a rifle shot. In reality, both sides in the conflict would have suffered horrific injuries and died loud, lingering deaths. Once hit, most would soil themselves. As shock set in, many would vomit.

All would cry out in agony. Little of this reality finds its way into discussions of the Rising and its legacy.

In addition to rifle fire, the rebels were exposed to a sustained artillery barrage from pounder guns located around the city centre. The high-explosive effect of such a barrage would include burning, decapitation and limb separation.

The shockwave effect at point of impact would cause the pulping of internal organs for anyone in close proximity. Shrapnel injuries defy description. Our grandparents were exposed to this nightmare scenario over the period of at least a week without respite.

The literature on PTSD is very explicit on the consequences for those caught up in such conditions. According to British research, at least 20 per cent of those exposed to combat conditions will automatically go on to develop the symptoms of combat stress reaction (CSR).

US research suggests that 30 per cent of all veterans develop CSR. Israeli research concludes that 37 per cent will suffer the symptoms of CSR as the organic and inevitable consequence of being exposed to such trauma.

If untreated, those experiencing CSR will develop PTSD. The symptoms of CSR and PTSD are both physiological and psychological. The physical symptoms – associated with chronic hyper arousal and hyper vigilance include headaches, back pain, shaking, tremors, sweating, nausea, abdominal distress, urinary incontinence, hyperventilation, heart palpitations, insomnia, nightmares and an excessive “startle response”.

The psychological symptoms of CSR are profound. Veterans of combat conditions, who rarely want to discuss their experience, can become emotionally numb and irritable as well as being restless and having anxiety attacks.

They have a heightened sense of threat which makes them angry, mistrustful, rigid, controlling and depressed. Many have relationship problems and become distant and remote. They often turn to substance abuse or heavy drinking to try and cope with these symptoms and many die by suicide.

PTSD was not recognised in the Ireland of the 1920s. Approximately 300 of the veterans of 1916 – men and women – would have suffered from undiagnosed and untreated PTSD. Perhaps that is one of the reasons why so many never spoke of their experiences.

My grandmother died during the hot summer of 1976. She passed away in a nursing home on the sea front in Bray. I remember, as a small boy, that she always had her suitcase neatly packed and placed at the end of the bed. “You never know when you’d have to leave in a hurry,” she confided in me.

Who knows how many of our grandparents’ generation suffered from PTSD arising from their experiences of combat and conflict in our towns and cities?

A whole generation of silent Irish men and women sat by the fire in homes all over Ireland for decades – never speaking of their experiences.

Their silence might give us some understanding of the plight of those refugees fleeing war and terror in the Middle East today.