The man who taught Picasso, Elton John and Charlie Chaplin to swim

Following in the flip flops of Picasso and Brigitte Bardot, Kevin Pilley learns to swim with a veteran instructor at the Grand Hotel du Cap Ferrat 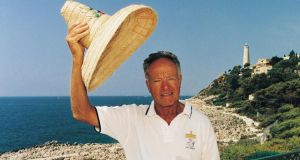 The French Riviera has always had “pull” and, although perhaps its great days are over, the wealthy still go to the Côte d’Azur to stroll the Promenade des Anglais, cocktail at Le Negresco, visit the casinos and designer shops and put their faces in salad bowls and see how long they can balance a ping-pong ball on top of a piece of garden hose.

Pierre Gruneberg was born in Germany, the son of a lawyer and a teacher. He moved to Paris when he was three. Originally he trained as an interpreter but, hitchhiking down to the south of France, he discovered Cap Ferrat and its famous “Grand Hotel”, local watering hole of Somerset Maugham and the chic retreat of the international elite.

“I was 19 and had found paradise on earth! I asked Monsieur Voyenne, the hotel manager for a job and he showed me a photograph of some pretty ladies in swimwear and asked me what I thought of them. My whole life turned on my answer. I said that they were very beautiful but all I wanted to do was work hard. And teach the world to swim.”

I am a hydro-phobic and I was following in some illustrious flip-flops. Gruneberg’s graduates include Picasso, Aristotle Onassis, Brigitte Bardot, Robin Williams, Gerard Depardieu, Elton John, Dame Shirley Bassey, Robin Williams, Ralph Lauren, Charlie Chaplin and his family. Paul McCartney learned to swim by singing Yellow Submarine down a straw into a washing up bowl.

Gruneberg placed his famous bowl in front of me. I sat on a lounger by the swimming pool. I could see there were no jellyfish or sharks in the bowl.

“There are five problem areas for non- swimmers. The nose. The nose. The nose. The nose and the nose. People panic when they are underwater in case they swallow water or breathe it up their nose. It is a simple fear of drowning. People are also frightened of not feeling the ground under their feet, losing balance and suffering a claustrophobia attack. All can be cured by singing underwater. Now blow!”

I bubbled away for a few seconds and Gruneberg said, “Bon”. Gently, he pushed my face into the bowl and my nostrils effervesced. The Aleppo pines screened me from the outside world. Learning to swim is a very self-conscious thing.

“I enjoy seeing the progress people make - people who think they are unteachable and will never swim. My office is the most beautiful in the world. A fabulous 33-metre long heated seawater swimming pool beside the edge of the Mediterranean. Do 30 lengths and you have done a kilometre. I go to work in a pair of trunks and a Mexican sun hat. It takes me less than five minutes to walk from my flat in the hotel grounds, down through the pinewood parasols and perfumed gardens to the Club Dauphin where I give my lessons. That’s my commute.”

The Grand Hotel du Cap Ferrat, between Nice and Monaco , was built in 1908. Gustave Eiffel designed its original rotunda .The hotel was once bought by a millionaire as a birthday present for his wife. Princess Louise, the Duchess of Argyll (Queen Victoria’s daughter) was once in almost permanent winter residence there. Local attractions include the medieval villages of Eze, Roquebrune, Saint-Paul de Vence, Gourdon and Grasse, the perfume-making capital of France.

Recently extended, with 17 acres of gardens, a funicular down to a 1939 seafront infinity pool, a wine collection containing a 1854 Chateau d’Yquem, and the Michelin one-star Le Cap restaurant, The Grand is still a Belle Dame of Belle Epoque hotels. It is wise, however, to wait til after your swimming lesson before you try executive chef Didier Ainies’s signature caviar lasagne.

Gruneberg has a scrapbook which contains messages and cartoons from the rich and famous. Picasso drew a dove of peace, Jean Cocteau dashed off a portrait, and the Beatle thanked him on behalf of “the Missus” for initiating them into the “Frog , Scissor and Pen” breast stroke chantra.

It is never too late too learn to swim. Gruneberg once organised butterfly relay races for local widows. A qualified physiotherapist who worked with the French national team at the Melbourne Olympics, Gruneberg calls himself an “aquatherapist”. In the winter he teaches skiing in Couchevel.

I came up for breath. “Forty per cent of the world can’t swim and most that do can’t swim properly.” Gruneberg swims a mile in the open sea every day – to the lighthouse and back.

I am scared of the deep end. And therefore the sea. The lesson continued poolside. “Now, sing into that salad bowl for me,” said Gruneberg, his hand behind my head. He suggested I am Forever Blowing Bubbles , rather than an aria.

He reassured me he wasn’t laughing when my face was submerged. “It’s not a party trick but a very real, visual way of getting someone used to having their face in water and showing them how to breathe in it. You can exhale in water quite safely. The slower your breathing the better.

He looked at the pool and I looked with him. “Ready?” He saw my hesitation. “It’s 28 degrees! The original pool was designed by an Italian who turned out to be a spy!”

In 10 minutes I had been converted to the patented “Methode Pierre Gruneberg”. In half an hour I was crawling. I had never crawled before. And in an hour – miraculously – I was standing on the bottom of the deep end.

“One man came for my help because he couldn’t sit in the bath with his baby son. He was ashamed. This type of fear is not uncommon. I come across it all the time. We traced his phobia back to barbaric swimming lessons. His teacher used to pull him along in the water by a rope tied to his waist. No wonder he was scared. I soon hand him floating face down in the water. It’s as easy as ABC – Aquatic Breath Control.”

I couldn’t stop swimming. But I had to get out. My time was up. And I was beginning to prune. 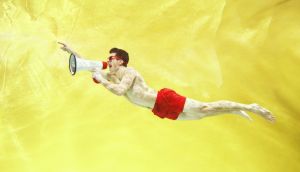