The serial con artist who targeted Irish illegals in the US

Ralph Cucciniello set his sights on the undocumented Irish, amassing $1 million from his victims – until one Belfast-born woman fought back 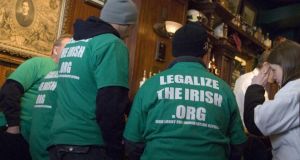 Anne Muldoon stood under a street lamp by one of the many Gothic-style gates that line the perimeter of the Yale Law School campus, in Connecticut. It was 2006, and the 23-year-old Belfast woman was waiting for a man who had promised to change her life forever.

When Ralph Cucciniello showed up and escorted her to the university’s law library, Muldoon felt a surge of excitement and hope.

“He had a big, smiley face and he was superfriendly,” she says. “I went up to Yale with a group of friends, and he would hug the girls and high-five the guys. He was larger than life.”

Cucciniello told Muldoon and her friends that he was a visiting attorney working with Yale’s Immigration Law Clinic. They had been lucky enough to be accepted into an exclusive programme he was running.

He claimed to have found a loophole in the immigration system that would make it possible for people like them, living illegally in the US, to gain legal status. For Anne Muldoon and her compatriots this was huge. This was what they had been waiting for.

There had been little progress on immigration reform since the Donnelly visa programme in the late 1980s, which bestowed green cards on several thousand Irish, and the Morrison scheme, which legalised 48,000 Irish from 1991 to 1994.

Part of the process

“There were a few other faces I knew on the train up to Yale,” Muldoon says. “The Irish community in Queens, where I was living, was very tight-knit, and we all knew each other. I remember the look on our faces; we were all so excited. We were thinking, We’re going to get legal through this. We’re all going to be part of this process, and it’s going to be great.”

The process seemed straightforward: fill in some forms, attend a medical, get your fingerprints and biometrics done . . . and hand over a $5,000 fee.

“Our immediate reaction was, You’re getting scammed,” says Robert, another young Irish expat hoping to gain legal status in the United States. He had been told about the programme being run by an attorney at Yale.

“The more we heard about it, though, the more convincing it was,” he says. “Cucciniello impressed upon us that he was our lawyer and that we had the weight of Yale Law School behind us.”

But time went by, and there was no sign of any green cards.

A few months into 2007, eager to hear about the progress of her application, Muldoon took the train back to Yale to meet Cucciniello, this time alone.

Muldoon says, “He said to me, ‘You’re number 57 on the list. Is there anything you would do to move up?’ I told him I didn’t have any more money – by this point I’d given him $12,000 – and before I knew it he was leaning over and touching my leg. I got out of that office as soon as I could. That was the alarm bell. That’s when I knew this guy wasn’t who he said he was.”

Ralph Cucciniello is not, and has never been, a lawyer. He has never been a faculty member of Yale Law School. He is a serial con artist with a rap sheet dating back to the 1970s, when he ran a scam on his own family.

In 1986 Cucciniello married an Irish-American woman, Elizabeth McDermott. He claimed he was a television producer and financial analyst. He subsequently convinced his new wife’s mother to “invest” her life savings of $108,000.

Two decades later it was the undocumented Irish he had targeted. Over two years Cucciniello collected upwards of $1 million from illegal immigrants, most of them from Ireland.

After Muldoon fled Yale that evening in 2007 she contacted Olwyn Triggs, a friend who also happened to be a private investigator .

Triggs reported Cucciniello to the authorities and worked closely with the police. On May 1st, 2007, he was arrested outside a cafe in Greenwich Village, in downtown Manhattan.

Ralph Cucciniello was later sentenced to 30 years in prison, with the last 10 suspended.

Anne Muldoon was relatively lucky. She got some of her money back and, a decade on, still lives in New York – as a fully fledged US citizen. Many of Cucciniello’s other victims were left living in the shadows of the US immigration system, a few thousand dollars lighter.

Ralph Cucciniello is the subject of Documentary on One: The Loophole, on RTÉ Radio 1 o n Saturday at 2pm, and online at rte.ie/doconone