The best Irish pub in the world outside Ireland is... 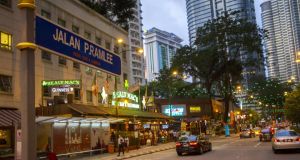 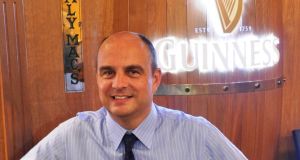 Proprietor of Healy Mac’s pub Liam emigrated from Belmullet, Co Mayo, as a teenager and has lived in the US, UK and Indonesia, before settling in Malaysia. 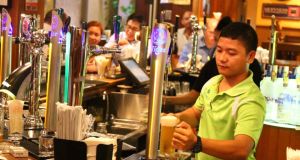 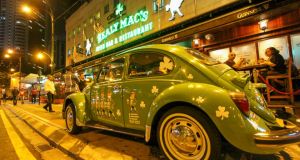 Healy Mac’s in the Malaysian capital Kuala Lumpur has won the Best Irish Pub in the World (Outside Ireland) competition. The pub won for its commitment to Irish food, its promotion of Irish sport abroad and its welcome for people of all nations.

Healy Mac’s, close to the landmark Petronas Towers, is one of a chain of seven pubs of the same name in Malaysia and is two years old.

The owner, Liam Healy, emigrated from Belmullet, Co Mayo, as a teenager and has lived in the US, UK and Indonesia. “I left for New York in the late 1970s, aged 15. But in all my travels I never found a good bar where I could just have a pint and feel at home.”

In 2008, Healy was running a teak and mahogany furniture factory in Indonesia. When that industry “died a death”, he decided to open Healy Mac’s. “It was fortunate in a way. If it hadn’t been for the global recession, I wouldn’t have opened an Irish bar.”

The Best Irish Pub competition, part of The Irish Times’s Generation Emigration project, asked Irish people around the world to tell us about their favourite pubs. The emphasis was on pubs not merely as drinking establishments, but as social centres for Irish emigrants and promoters of Irish culture.

For the past three years, the pub has sponsored the local GAA club, the Orang Eire team, which has men’s, women’s and underage teams, of multiple nationalities. After Monday-night training, the teams meet in Healy Mac’s for a weekly table quiz.

When Malaysia hosted the GAA’s annual Asian Games in which Gaelic teams from across the continent compete – for three consecutive years, Healy Mac’s not only provided the catering but was also the favoured venue for post-match celebrations.

Healy also does occasional music promotion for the Irish band the Script, who played Kuala Lumpur last week. Their afterparty was – of course – held in Healy Mac’s.

A key criterion for the best pub competition was a commitment to Irish food. In Healy Mac’s, Guinness Steak Pie shares a menu with lamb stew and an all-day full Irish breakfast. Most of the dishes take inspiration from Ballymaloe, where the former head chef Andrew Kelly trained, but there are also Tayto sandwiches available for nostalgic expats.

Healy, however, attributes the pub’s win to one key factor: friendliness. “We have to keep a hold of our personal touch,” he says. Each of his bars has an Irish manager (Steve Hennessy from Cork oversees the winning outlet), and staff from Bangladesh, Vietnam and the Philippines. Malaysia is 60 per cent Muslim and alcohol consumption is low among locals, hence there is always a large expat clientele in Healy Mac’s.

The Irish Embassy in Kuala Lumpur estimates the Irish-born population in Malaysia at between 1,000 and 1,500. Many work in the country’s booming energy industry, in engineering, or in the information technology sector. “You won’t find too many block-layers,” says Healy.

They also recognised other Irish pubs abroad, naming The Auld Shillelagh in London “most authentic” Irish pub abroad. The Irish Pub Koblenz in Germany was named “best ambassador”, for its role in introducing Germans to Ireland. And Bubbles O’Leary in Kampala, Uganda, was judged to have the “best backstory” for dismantling a bar in Drogheda Co Louth and reassembling it in Africa.

The Irish Times will mark the award with a plaque at Healy Mac’s, and stage a cultural event in the pub, with support from Diageo.

See also: The 10 best Irish pubs in the world (outside Ireland) shortlist, the original reader nomination for Healy Mac's, and a selection of other competition entries from the 1,500 received from around the world.