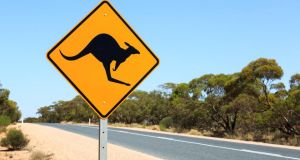 ‘The Irish are well regarded in Australia. Probably because we were never part of this country’s ruling elite.’ Photograph: Getty Images

1. Australians don’t really get the craic thing. When you begin again as an Irish person Down Under, be sure to allow yourself some time to adjust to the Australian way of doing things. They can be surprisingly taciturn, these Aussies. Come to think of it, does anyone really get the craic outside the Auld Sod? You’ll find Australian humour ironic and deadpan, but seldom self-depreciating. It’s frowned upon to constantly take the mickey or slag off someone. A one-line put-down is sufficient but it’s important not to overdo the humour, or you’ll run the risk of causing offence or being advised impolitely where you can go.

2. Australians have zilch interest in your welfare. You shouldn’t be fooled by the ubiquitous and brusque, “gidday, how are you going, mate?” It is simply a greeting and nothing more. Yyet perversely, if you are in a spot of bother, you’ll have no shortage of would-be helpers on your doorstep in an instant.

3. Be patient and you’ll eventually make friends. There are so many subtle things to absorb about the Aussie way of life. You’ll have to adapt to the formality of work colleagues. It’s not that Australians are unfriendly; it’s just that they are more likely to have their own well established friendship groups. That said, it will take time to get accepted, but it will eventually happen. You’ll just have to be patient. Needless to say, you should forget about striking up random conversations with strangers on public transport. If you do, you’re likely to be regarded with thinly veiled suspicion.

4. The Irish are well regarded in Australia. Probably because we were never part of this country’s ruling elite. Historically, we were more likely to be found at the margins of society. So nobody has any particular beef with us. It also helps that a significant number of Australians can legitimately claim Irish ancestry; although it’s only fairly recently that having convict forebears has been embraced and even celebrated. You’ll be surprised at how many people claim their great-great-great grandfather or grandmother was banished here for stealing a loaf of bread or a chicken. Some even attribute larrikinism and disdain for authority to the influence of our Irish roots.

5. Be prepared to be appalled by the plight of Australia’s indigenous people. Aborigines continue to have shorter life expectancies and they are still far more likely to be incarcerated. This is a sad but undeniable reality of modern Australia.

6. Australia is a loyal member of the Commonwealth. Although Australia is a nation of migrants, its Anglo-Saxon influence endures. Any news from Buckingham Palace is lavishly and uncritically reported by the Australian media. The Union Jack still has pride of place on the national flag. The queen’s portrait hangs in town halls and bowling clubs across the length and breadth of this continent. Her portrait is our equivalent of the framed 1916 proclamation. A referendum on becoming a republic was resoundingly defeated as recently as 1999. So, it seems most Australians are content to live in a country that is a constitutional monarchy with Her Majesty as our head of state.

7. Australians don’t care much for politics. If voting wasn’t compulsory, few would ever venture out to mark a ballot paper. As long as their standard of living is semi-decent, they’re unfussed about who holds power in Canberra. In the trustworthy stakes, politicians rate poorly - on a par with used car salesmen.

8. Forget about going to the pub. Pubs aren’t particularly popular here. Most alcohol is drunk in the home. Australian pubs lack the conviviality and character of the drinking houses of Ireland and the UK. Gaming machines are now commonplace in most pubs here and their presence does little to enhance the ambience. And Australia’s Irish theme pubs, like their clones all over the world, are not typical of Aussie pubs at all. It’s perfectly acceptable and much cheaper to head home with a six pack or two at the end of the day. And while I’m on the subject, you’ll have to contend with lingering stereotypes of the Irish fondness for the drink.

9. There are still jobs here, just fewer of them. After almost a quarter century of economic growth, there are fears for our immediate future. The mining boom is showing some signs of slowing. But Australia still has a lot to offer the would-be migrant. Nurses are always in demand. And the hospitality sector is a burgeoning industry. Just don’t expect to have anything handed to you on a plate.

10. Just be prepared to have a go, mate. The Aussies will love you for it, no kidding. You won’t look back. Well, maybe you will, just a tad. But don’t worry about Barry’s tea or Tayto. Trust me, Australia’s food and beverage offering is up there with the best of them. And if you decide to head this way, bear in mind it’s a helluva long way from anywhere.

Would you agree with Philip’s assessment of Australian culture? Have you any other advice to share with Irish people moving to Australia? Let us know in the comments section below. Planning a move to Australia? Check out The Irish Times Destination Australia guide, with practical information on things like finding a job and accommodation, and advice from Irish people already living there.

Philip Lynch lives in Tasmania and is a regular contributor to Generation Emigration. Read more of his articles here.