Snail farming? There’s money in that

An acre of land under snail cultivation can generate potential profit of €20,000, according to Ireland’s snail-breeding pioneer 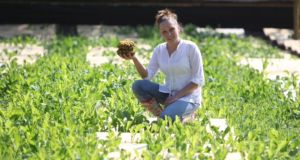 Snails are the enemy of the gardener, especially those who grow vegetables, and yet 270 people paid €100 to attend a conference taking place in Tullamore today and tomorrow to learn how to breed the slimy creatures, in bulk.

The global market for edible snails is worth €1 billion, with the French and Italian markets accounting for €300 million, according to National Organic Training Skillnets (NOTS), which organised the conference.

France imports more than 80 per cent of its escargot requirement and Italy imports 60 percent, leading to an export potential valued at approximately €200 million, which Irish farmers are keen to exploit, according to NOTS.

There are thought to be up to 30 small snail farms in development in Ireland at the moment, with about six operating commercially.

Eva Milka set up Ireland’s first snail farm, Gaelic Escargot, three years ago and now also runs a snail breeding research and development centre. Being the pioneer in the field meant that Milka suffered setbacks with her first two harvests (the cycle lasts 10 months), but she believes she has now “formulated a unique system suitable for the Irish climate”, and is well on the way to establishing a successful and sustainable business.

You don’t need a lot of land to get started, and the financial return is significant: one acre can produce 10 tons of snails a year, with a potential net profit of €20,000, according to Milka. If that sounds tempting, Milka runs training courses for potential snail farmers at her R&D centre in Co Carlow and her production site in Co Wexford (€250, see gaelicescargot.com).

It might not be to everyone’s taste, but snail meat, containing protein, iron and Omega-3, is considered a healthy food – as long as you don’t drown it in garlic butter. Milka also points to the potential for production of high value snail caviar.

“The slime, or muccus, is also being used by the cosmetic and pharma industries,” Milka says, adding further potential value for snail farmers. The slime, used in face creams, addresses inflammation and redness and stimulates skin regeneration, manufacturers claim.

The breed of snails that Milka is working with is the common brown snail (Helix aspersa muller), just like the ones you might be at war with in your garden. She sells her harvest, in October/November, to a Polish distributor, from where they are most likely combined with snails from other countries of origin before being sent for processing.

She is keen to set up a distribution channel for Irish snails. “The objective is to build markets and sell the snails as Irish produce,” and she sees strong potential for the development of snail breeding in Ireland. “We have the climate, the clean water and the good soil.”

Shamrock Escargots , established less than a year ago by former civil engineer Marek Pokorney, has taken snail farming one step further and is processing on site in Ballycowan, Co Kildare.

Snails in garlic butter, marinated snail liver, snail fillets and snail caviar are the products Pokorney is producing, and he will be demonstrating how to use them at the BITE artisan food festival in the RDS, Dublin 4, on November 18th-20th.

The NOTS seminar panel of speakers also includes Panagiota Vlachou, who has 12 snail farms in Greece, Germany and Cyprus, and Irish snail farmers Stephan De Wit of Marphan Escargot in Co Wexford and Catherine and Richard Cocollos of Celtic Escargot in Kinvara.