Select: food for the flicks

As the Jameson Dublin Film Festival begins its thirteenth season, Rachel Collins picks the best food to follow your film 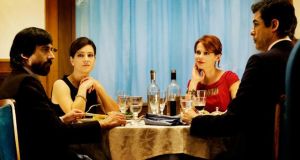 Ivano De Matteo's The Dinner (I nostri ragazzi), showing twice during the festival: in the Light House Cinema on Sunday 22nd, and in Movies@Dundrum on Monday 23rd

The Jameson Dublin Film Festival has begun its thirteenth season, with some 120 films showing at more than a dozen venues around the city until March 29th.

The Dinner (I nostri ragazzi), an Italian film based on Herman Koch’s bestselling novel of the same name, takes place at a dinner party attended by two couples who deal in very different ways with the possibility that their children have committed a violent. This dramatic Italian movie will show twice during the festival: at 3.30pm in the Light House Cinema on Sunday 22nd, and at 6.30pm in Movies@Dundrum on Monday 23rd. Head to Terra Madre (13 Bachelor’s Walk, Dublin 1, terramadre.ie) for lunch before Sunday’s showing for some authentic Italian drama - in the kitchen. The food here is simple but outstanding. Try the Lardo di Colonnata (€6.50), cured pork fat with rosemary and spices served on bruschetta, or the fresh Sicilian tomatoes, or burrata flown in from Italy - a mozerella with a creamy centre that has to be tasted to be believed.

After the Monday evening show in Dundrum, head for a late supper in L’Officina, from the Dunne and Crescenzi stable of restaurants (Dundrum Town Centre, dunneandcrescenzi.com). Try the wonderfully rich truffle and mushroom ravioli with Gran Trentino and truffle oil (€16.50) or the Insalata del Pastore, a green salad with sweet, ripe pears, tangy goat’s cheese, walnuts and Helen Gee’s honey (€9).

Head back in time at 6pm Saturday March 21st in the Light House in Smithfield, with Julie Andrews and James Garner’s 1964 classic The Americanisation of Emily. Andrews plays a young English widow who falls for a flighty American soldier in this anti-war romantic comedy. Continue the theme with the Americanisation of your taste buds with some US-style barbecue at My Meat Wagon (Smithfield Market Square, Dublin 7, mymeatwagon.ie). You can get chicken, pork or beef cooked low and slow here, served with two sides in a box (€11.95), bap (€12.50) or on a board (€15.95). Try the baby back smoked ribs with a Jameson basting sauce (for the festival that’s in it) with a choice of slaw, fries, some proper mash, smoky baked beans or corn on the cob. There’s a good selection of craft beers too.

In What’s Up Doc, Peter Bogdanovich’s farcical 1972 comedy, four guests check in to a hotel with identical overnight bags. One contains top secret papers, the second has diamonds, the third underwear and the fourth prehistoric rocks… The ensuing mix-up of the luggage causes all manner of shenanigans, including a scene where the four guests, including Barbara Streisand and Ryan O’Neal, attend a formal banquet and all end up under the table. The movie is at 2pm Friday March 20th. Have your own formal (ish) banquet afterwards with the pre-theatre menu at Michelin-starred Chapter One (18 - 19 Parnell Square, Dublin 1, chapteronerestaurant.com).

This menu allows you to sample some of Ross Lewis’s Michelin-starred cooking for just €37.50 for three courses. Order from 5.30pm to 5.45pm (last orders 6pm, tables vacated by 7.30pm) from a menu that includes a delicate starter of violet artichokes “en barrigoule” with a feta cheese mousse and pickled winter vegetables; breast of pheasant with parma ham farce, creamed cabbage with smoked bacon, confit thigh glazed with a walnut and black pudding crust; and finish with a dessert of tea-soaked prunes, stout sponge and lemon and ginger ice cream. You probably shouldn’t try to hide under the tables though…

Finally, one of the most lovable heroines of the 1990s appears in Muriel’s Wedding, at Cineworld on Parnell Street next Saturday, March 28th at 2pm. The Aussie comedy features Toni Collette as the unfortunate Muriel Hislop, who just really, really, really wants to get hitched. She and her friend Rhonda (Rachel Griffith) warble their way through the Abba songbook on the journey towards Muriel’s happy ending. Your life could be as good as an Abba song as you sing your heart out after the movie with a session at Ukiyo Bar (9, Exchequer Street, Dublin 2, ukiyobar.com). You can throw dinner into the mix, with some good Asian fusion here - there’s a karaoke package, where for €45pp you can get a two-course meal (including a starter platter of gyoza, tempura, California roll nori maki and eda mame, plus mains including sizzling bul gogi beef with vegetables or teriyaki salmon) plus half a bottle of house wine or two beers per person, followed by two hours of karaoke in the booths downstairs.

Full details of all JDIFF movies and bookings from jdiff.com