Fakeaway Friday: The breakfast sandwich gets a chef’s home-cooking upgrade 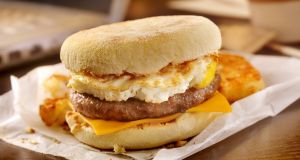 “I won’t lie, I drop into McDonald’s early on some grey mornings for a McMuffin. It’s my guilty pleasure,” says the chef Mark Moriarty. “I was trying out this recipe to see how close I could get it to the real thing. It’s pretty close, both in look and flavour, and the added bonus is I’ve used quality, well-sourced ingredients.”

The recipe involves blending two types of pork, to get that distinctive circular sausage patty. “I’ve used a mix of pork mince and sausage filling to get the texture and flavour right. The whole thing relies on the seasoning, flavour and melting texture of the patty.”

It’s well worthwhile making the muffins, which are started on a hot pan and finished in the oven. But patience will be required to see them through two proving periods, each about 45 minutes long. So set the alarm, or make them the night before. They’ll be toasted anyway, so they don’t need to be fresh from the oven.

I’ve put up a few step-by-step recipes in my highlights for comfort dishes. Garlic brioche bread and a chocolate-and-whiskey souffle have been the most popular so far

This very convincing fakeaway is definitely a treat, but a not altogether healthy one. “It’s pretty high in salt content, too, but it needs it to cut through the egg,” says Moriarty, who works at two-Michelin-star Greenhouse restaurant, as well as being a global brand ambassador for Diageo and presenter of food and cooking shows on RTÉ television.

Like many chefs, he has been cooking his way through lockdowns and sharing his at-home recipes on social media. You can follow his guide to making his sausage, egg and cheese McMoriarty muffin on Instagram, where he is @markmoriarty1. “I’ve put up a few step-by-step recipes in my highlights for comfort dishes. Garlic brioche bread and a chocolate-and-whiskey souffle have been the most popular so far.”

The second season of Cook In, Moriarty’s TV series about home cooking, starts on Wednesday, April 7th, at 8.30pm on RTÉ One.

Method
1. Warm the milk to above hand temperature and add the dried yeast, then allow it to sit for one minute

2. Mix the flour, sugar, salt and melted butter, then add the milk and yeast. Knead for five minutes, until a soft, sticky dough is achieved. Transfer to a greased bowl and leave in a warm place to double in size. This should take about 45 minutes.

3. Once doubled in size, turn out onto a floured bench and roll approximately. 1.5 inches thick. Use a cutter to cut into circles and place them onto a tray dusted in flour or polenta. Cover with a cloth and allow to double in size again (another 45 minutes approximately. Preheat your oven to 160 degrees.

4. Heat a non-stick pan over a medium heat, add a little neutral oil and cook the muffins for two minutes on each side, till golden brown, then transfer to the oven to bake for five minutes. Remove and reserve.

5. To make the patty, mix the pork mince, sausage meat (squeezed from its casing), salt and dried rosemary. Shape into thin pattys approximately two centimetres thick. Cook in a hot pan till crisp on both sides.

6. Cook the eggs in a ring cutter to retain their shape, if you have one, and once the egg white is set, place them under a grill to cook the yolk on top.

7. Slice the muffins in two and toast them, then assemble with the pattys, cheese and egg. Serve immediately.