Sack farming in Uganda waits for no rain 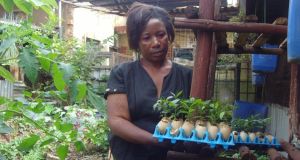 Harriet Nakabaale, 45, a resident of Kawaala, a Kampala suburb, making the most of her garden. 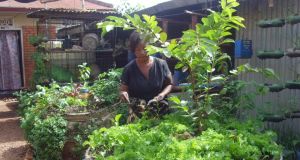 Harriet Nakabaale, 45, a resident of Kawaala, a Kampala suburb in her sack garden.

Faced with expensive food, low incomes, high unemployment and barely a patch of arable land, residents in the suburbs of Uganda’s capital are adopting a novel form of intensive farming.

Sack farming is just what it says: farmers, usually those who are tight on space, growing vegetable produce in a sack. Renewed interest in urban farming globally has seen the concept adopted in cities around the world.

In the developing world, urban farming is important for households’ food security. According to Uganda’s Technical Centre for Agricultural and Rural Cooperation, 800 million people worldwide have had their food security improved through urban farming.

In Kampala, 40 per cent of total urban food requirements are accounted for through urban farming. For Harriet Nakabaale, a 45-year-old resident of the suburb of Kawaala, this type of farming is nothing new. Growing up, she was always told that every woman needs a garden. She learned how to grow vegetables in sacks from her parents, who used the technique at home on a small scale.

Stones in the sack

The sacks, which are about a metre wide, dominate Nakabaale’s 10m-by-15m plot. In one of the sacks she grows spinach, dodo and carrots. Right in the centre of another is a young guava tree, surrounded by green vegetables. Spring onions, celery, tomatoes and spinach dominate another.

“Usually the crops with big roots, like carrots, go on the top, and the sides are reserved for those with small roots, like ordinary vegetables,” she says. “I water my sack garden almost on a daily basis, so I have no such a thing as a crop-growing season. My garden is ever green, even during the dry season.”

In the shade of the sacks are disused paint cans. Hanging on the veranda of the chicken coop are one-litre plastic soda bottles. All teem with crops.

Nakabaale, a mother of three, trains others in the farming techniques for the equivalent of about €5.50. She earns about €275 a month from tutoring and from the sale of seedlings and crops, mostly onions and tomatoes.

No need for rain

For locals, market-bought fresh fruit and vegetables are often unaffordable, even when available. The urban poor spend an estimated 50 to 70 per cent of their income on food, twice as much as their rural counterparts. So they are the most vulnerable to price increases.

When money is short, people will tend to adjust consumption towards high-calorie foods with low nutritional value. Urban agriculture has the capacity to overcome this situation by providing a secure source of nutritional food.

For Nakabaale the business has been a huge help. “I have kept my three children in school. We don’t buy foodstuffs from the market, because, much as I sell most of the food crops I produce, there is always enough left for home consumption,” she says before turning to greet some neighbours who have come to buy her produce.

Covid-19 jargon buster: What are ‘the curve’, R0 and the NPHET?
Real news has value SUBSCRIBE