Review: no faffing, just falafel in this Moroccan restaurant 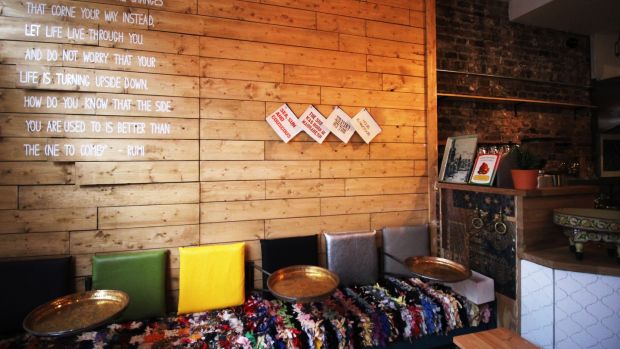 Falafel are a faff. Make your chickpea or bean mix too dry and you end up with balls of sawdust. Too wet and they fall apart like a badly constructed argument. Then there’s the question of flavour. Should they be a bland backdrop or pack their own herby flavours and spicy warmth?

Overthinking falafel is a national pastime in the many places. In his Jerusalem cookbook, Yotam Ottolenghi describes how falafel united Muslim and Jewish childhoods in the city. He and coauthor Sami Tamimi both remembered arriving home after school with the same story: “a massive falafel sandwich, tahini-stained shirt, no appetite, angry mother”.

Moro Kitchen’s falafel are terrific, soft but not mushy, a minty green inside and all bound together by a UFO-shaped crispy fried coat. You can judge a restaurant on its cheap staples (all too often cheap is the opposite of cheerful), and on that benchmark Moro Kitchen is a great new place.

It looks like a takeaway at the front because it is a takeaway. But the upstairs is a handsome room overlooking the street. You can sit at large shared tables or settle into two armchairs and a small table. They’ve stripped back the plaster to reveal the brickwork, giving this slightly sad old building a handsome new face.

Moro Kitchen is by the same people who run Dada, the Moroccan restaurant on William Street South, where it’s all Moorish arches and mint tea poured from a height. This daughter of Dada is a more modern girl, with less of the ceremonial feel to everything. It is a sign of how the world has embraced this way of eating, from pomegranates from Lidl to hummus in lunchboxes.

They describe it as a Moroccan street food, and it’s a souk full of food voices, ranging from Middle Eastern mezze (small plates) to French merguez sausages to the full-Marrakesh of sizzling tagines and couscous laced with plump sultanas. It’s not a place for a late boozy meal. Moro Kitchen closes at 9pm and doesn’t have a beer or wine licence.

The Moro platter is happy food, the kind of cooking that could give you your five a day in one sitting without sacrificing the pleasure bit. There’s hummus with the soft scoop ice cream consistency that comes from a freshly made batch. Those great falafel are placed on top. There’s zaalouk, a muddy clump of grilled aubergine spiced with coriander, garlic, cumin and some vinegar to bring a tart edge to it all. And there’s a generous dollop of labneh, that luscious thickened yoghurt beside a harissa mayonnaise and some robust chermoula, a green paste of olives and herbs that, like everything else on the plate, tastes like it was made recently from scratch with good ingredients.

I get a kofta, two skewers of beef grilled crisp on the outside but still juicy inside, with the fluffy couscous stirred together with sultanas, roasted carrots, chickpeas and topped with a sticky sweet red onion chutney. There’s a long thin Gandalf’s beard of a pickled yellow pepper, which looks like it might blow your socks off with heat but is perkily piquant instead.

It’s not all perfect. The marinated beets don’t taste very marinated, and the carrots could do with more kick. But the eggs in a tagine demonstrate how the pot wasn’t just a fancy serving bowl but acted as a cooking oven. The eggs are still sizzling from the heat of the bowl and they’ve been simply sprinkled with harissa, sumac, spring onion and some more of that great chermoula.

We wash it all down with fizzy pomegranate juice and a malted apple drink and finish with two small squares of baclava and some mint tea, poured from a modest height by the friendly waiter.

I’ve already been back for lunch, upstairs this time in one of those armchairs, scooping up a different selection of mezze with toasted pitta triangles and wondering why the room is empty around us. Not for long. There are queues at places charging more for this kind of food and doing it less well. Moro Kitchen is a find, and it won’t be long before its crowd finds it.

Dinner for two with soft drinks, an espresso and mint tea came to €41.75

Sean Moncrieff: Why I do things I don’t want to do