Restaurant review: Stanley’s gets a second look and comes up smelling of roses 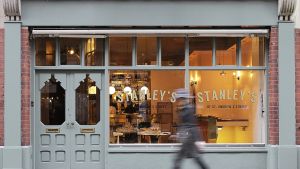 The things you plan the least sometimes turn out the best. This is why every right-thinking person hates St Valentine’s Day. Scheduling a day for romance is as joyful as a deflated heart-shaped balloon.

We’re in Stanley’s on St Andrew’s Street in Dublin, downstairs in the wine bar. It’s an unplanned outing after an impromptu cry of “Let’s go out, but not to our usual place”. I’ve eaten here before, and enjoyed it except for some oversalted fish. This is a second chance. They don’t come easily.

But two things happened after the previous review. First, a man who was at the next table wrote to me to say how much he loved Stanley’s. He had no vested interest, but was talking as a well-dined eater about town. Later, I found out that chef and co-owner Stephen McArdle had something more important on his hands than my dinner that night. His son had been born hours before.

If that doesn’t earn a second chance, nothing will. So we’re tucked in at a small table under the sloping ceiling. The walls are painted a soft green. There’s a candle in a wax-crusted wine bottle on the table and high-class jazz standards on the sound system.

For the moment, it feels like we’re not in Dublin. We could be in a city anywhere and lucky enough to find a place we’ll remember fondly when we get home.

The menu is chalked up on the wall and Liam has already ordered some cod croquettes, balls of soft fluffy fish in crispy lagging jackets sitting in a small puddle of silken house mayonnaise.

The star of Stanley’s is Morgan Vanderkamer. She’s the sommelier here. But don’t let that put you off. Bad sommeliers are pretentious up-sellers, there to push diners towards the wallet-busting bruisers on the wine list. Vanderkamer has taken the nonsense out of the role and will open your mind to new ideas about what to drink with your food. If you thought sherry was for fogeys and posers, she will change your mind. So we have ice-cold glasses of manzanilla to cut through the fluffy cod croquettes. We are in excellent hands.

The main event is the Irish charcuterie sharing plate. We’re going with an oloroso, the ruby-coloured sherry that gets its colour and kick from time and ageing. There are two on the menu, Vanderkamer says. One is good; the other is “amazing”, and priced accordingly, she warns. With a €16 plate of food between us, we push the sherry cask out and live it large on the oloroso at €13 a glass. It is a good decision.

There’s a small farmyard on that €16 charcuterie plate: generous slices of duck ham, smoked cured slices of moist pink meat. The duck ham is the soulmate of the apricot puree dotted on one side of the plate. The sharp pickled gherkins sing with the “bacon and cabbage”, a slice of ham hock terrine wrapped in crinkly soft leaves of bright-green savoy cabbage. There are two small delicate slabs of mi-cuit fois gras, delicate to the point of dissolving on contact with the tongue. The pear and vanilla sauce, in a small ramekin, takes the sweetness of the liver to another even more decadent place.

Just in case there isn’t enough on the plate (there is), we’ve ordered a plate of the bean and chorizo stew. The beans are in fact chick peas – but that’s even better in my book – and the chorizo has been minced to a small rubble that sits on top of the soupy mix. It’s the kind of stew where the juices have transformed from separate elements of meat, tomato, oil and wine into one glistening sheen. We get a blended Priorat, a Spanish red as heartwarming as the stew, to sip with it.

Dessert would be an option only for people less greedy in their savoury ordering. There’s a final glass of Rasteau, a fortified Grenache that’s served deliciously chilly. It’s a thought-provoking alternative to a syrupy dessert wine, and next time we’ll leave space for some cheese to go with it.

Romantic is a bleached-out word, but that’s what Stanley’s wine bar is: a properly love-it romantic joint, a new favourite to add to your list.